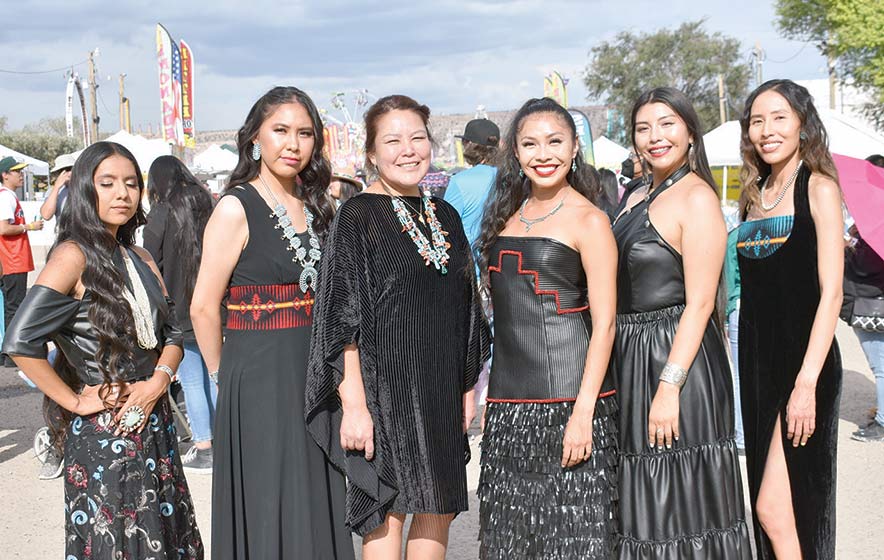 Fashion designer Shannon Tallsalt, who was one of the many talented designers featured at the Navajo Nation Fair’s Ah-Shi Beauty Fashion Showcase, says with a lot of hard work “anything is possible ” when it comes to pursuing your dreams.

Tallsalt first learned how to sew as a child by watching her mother and grandmother.

Like many other Native American fashion designers, as she grew older she started making traditional clothing and outfits by special order in her spare time.

“Making clothing was a way to bring in extra money for myself and to support myself and my family,” she said.

Years later, after her own children graduated from high school and she left her job as a behavioral health professional, Tallsalt decided to turn her attention back to sewing and starting her Sal Alta Design business.

“Back when I graduated high school, that was something I really wanted to do, interior design and fashion design,” she said. “But to actually make a career out of it back then would have been difficult.”

Now she’s jumped into the Native fashion scene full time and is making a splash with her original designs.

“I created different lines,” she said. “My clothing design is contemporary, but I try to incorporate a lot of traditional designs like from weaving, baskets and pottery.”

Along with many of her fellow Native designers, Tallsalt is riding the worldwide wave of a rapidly growing Indigenous fashion sector.

“Indigenous fashion has really taken off lately,” said Tallsalt. “We’re finally getting noticed both for contemporary and traditional clothing.”

“I love it,” she said. “You kind of got a little hopeless during that time period saying, will it every change? Will we ever get back to our norm?”

To do her part during the pandemic, Tallsalt also devoted time to making face masks for various Navajo Nation groups and organizations.

“We donated to the Navajo Tribe and they distributed them,” she said.

Now, she said it’s great to be back out in person again, meeting up with other designers and sharing ideas.

“I think people are more appreciative now,” she said.

At the packed fair Fashion Showcase, Tallsalt’s models took the runway with her captivating “Crazy Train” line of contemporary dresses featuring basic black textured fabrics punctuated with red and turquoise designs and accessories that stand out as quintessentially Diné.

“It kind of has a modern rock feel with the faux leather and fringe,” said Tallsalt. “I kind of went western with traditional and rock star.”

‘Proud to be Native’

Tallsalt said now that the Native American fashion and beauty products market is expanding and more visible, including on social media, people feel free to wear styles that express their individual identity.

Of course, many Native Americans have always paid a great deal of attention to being well-dressed, she said.

“For my grandmother, it was a teaching that you had to keep yourself clean and keep your hair and clothing nice if you’re going to be in public,” said Tallsalt. “It just kind of showed what type of a person you were.”

Today, Native clothing has been brought to a different scale where it can be worn every day in a modern way as a personal form of expression, said Tallsalt.

As an example, Tallsalt said nowadays, younger girls are wearing tier skirts or ribbon skirts on a daily basis.

“They want to wear their traditional outfits because that represents their culture and who they are,” she said. “For example, students who are going off to different reservations to compete, they want to show off their clothing.”

Tallsalt said when she was in high school, they only wore modern European style clothing to events like sports competitions.

“Nowadays, they’re showing their traditional culture, wearing skirts, and even moccasins and their buns,” she said.

“It shows they’re proud to be Native,” said Tallsalt. “It shows where they are actually coming from.”

On that note, Tallsalt said she’s also very grateful to all the designers from different tribes who are participating in Indigenous fashion shows and getting Indigenous clothing lines out there because without everyone’s help, it wouldn’t be getting so popular.

Plus, the broader display of Native American fashion is opening doors for other aspiring Indigenous designers, she said.

“Over the years, people from big industry like Chanel and Tom Ford have looked at Native American clothing and jewelry,” she said. “They take it and design it the way they like and we kind of don’t get credit.”

Now Native American fashion designers themselves are making headlines from Santa Fe to New York to Paris, she said.

“We have a lot of talented seamstresses and designers,” said Tallsalt. “It feels like we’re finally making our way in there.”