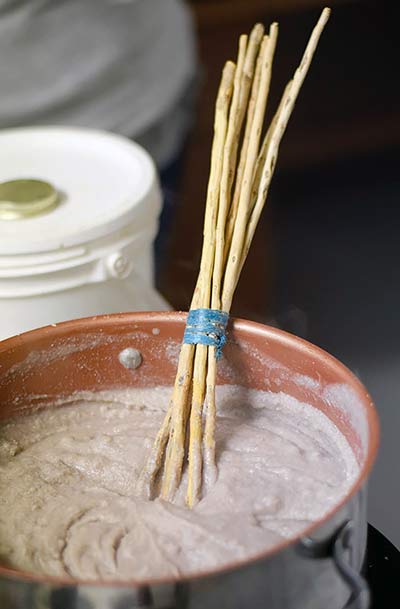 A pot of cornmeal is made for dahistin during the Traditional Food Preparation workshop at Ganado Chapter House on Jan. 9.

Navajos aren’t the only tribe that uses ash in traditional foods, said Roy Dempsey. Many Native nations across the country harvest local trees to make ash for various dishes. Up north, the Oneida Nation uses hardwood ash to make cornbread flour, according to a report by the Centers for Disease Control.

Here on the Navajo Nation, “we use juniper trees,” Dempsey told a group of around 15, from youth to elders, during the workshop titled, “Traditional Food Preparation: Cooking with Health, Wellness and Tradition,” at Ganado Chapter last Wednesday evening. Ash is needed to make blue corn mush and many other traditional Navajo foods.

“Ash is a basic thing,” Dempsey, a community outreach coordinator from Tsehoostooi Medical Center, said. “We’re trying to reinvigorate certain things that are culturally sensitive.” He added that not many people these days know how to make ash and opt to buy it at the flea market for a whopping $5 or more for a tiny bag. But it can easily be made at home.

Professional tip No. 1, that Dempsey got from an elder, was to forage juniper needles that have a copper tint at the end. One should only take as much as they need and clip only the needles off the branch.