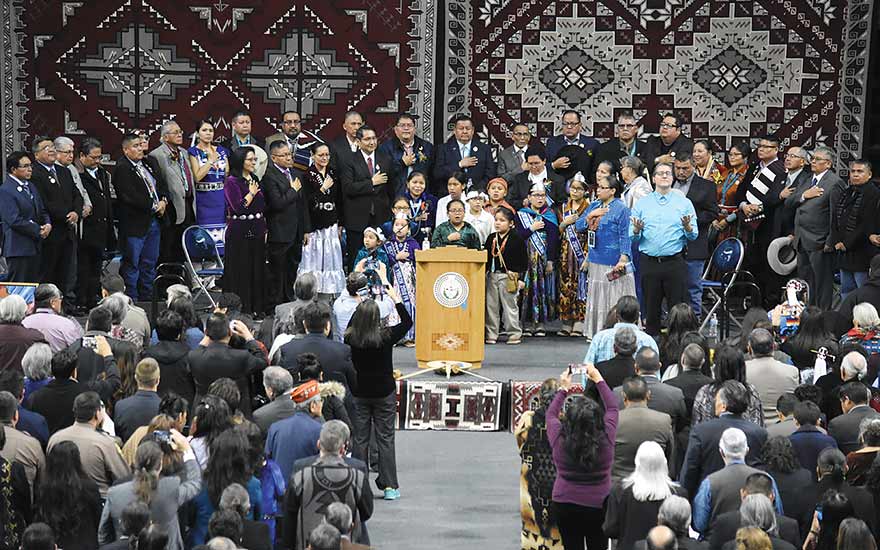 Draped in a chief’s blanket that he was given when he took the oath of office for the first time four years ago, Delegate Nathaniel Brown said he was humbled to have been voted again to represent Chilchinbeto, Dennehotso and Kayenta chapters.

Brown is one of nine returning delegates who will serve on the 24th Navajo Nation Council.

On Tuesday, in front of a large crowd that MC LA Williams said was at near capacity at 5,200 people (although the Times estimates the crowd at 3,500), they took the oath of office at the Fighting Scouts Events Center along with 15 newly elected delegates.

“It’s an honor and I still can’t believe I’m back in the position knowing the gravity of this leadership position,” said Brown. “One thing my dad and family told me was: ‘You’ve got to go back to the elders. They have to ask you. You don’t decide, “I’m going to run, or I’m the best candidate.” It’s what does your elders say and what your community say.’”

Brown said in the new Council he is looking forward to “tackling” issues from water to bringing awareness to cultural revitalization. One way he will do that is by working with medicine men in order to teach the youth.

“Our children need that and we have some who are lacking in the teachings,” said Brown. “It’s our job as leadership to help get that and get them riled up!”