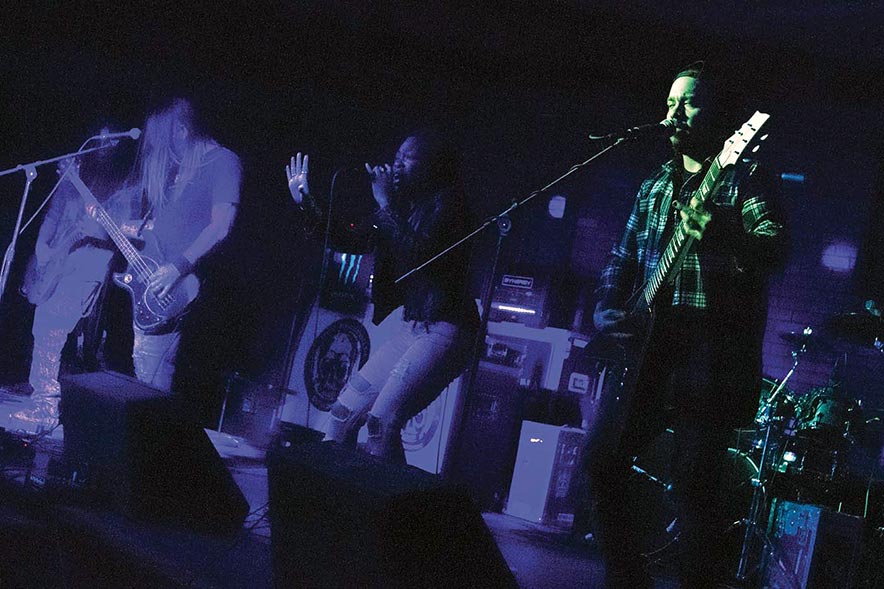 Special to the Times | Rick Abasta
The Mendenhall Experiment was a crowd favorite during the Fire In Your Soul Tour stop in Gallup Oct. 26 at Juggernaut Music.

The Fire in Your Soul Tour rolled through Gallup for a concert at historic U.S. Route 66 venue Juggernaut Music on Oct. 26, featuring Huntington Beach, California, band Breaking In A Sequence (BIAS) and the Mendenhall Experiment.

Ernie Santiago, owner and proprietor of Juggernaut Music, said business is steadily increasing as the venue continues to promote mainstream acts and new artists from across the country.

Ex-KORN drummer Ray Silveria was originally slated to perform with BIAS for the Gallup date, but was pulled off the tour due to a personal emergency.

“We were really impressed and we like the Mendenhall Experiment,” Santiago said. “The singer was phenomenal.”

Guitarist and songwriter Brian Mendenhall is the namesake behind the band, which he began at the age of 19 after teaching himself how to play the guitar while overcoming the limitations of cerebral palsy.

Santiago said, “I didn’t even know that was a part of the band’s story. I did not know that he had to go through all of those challenges just to create music.”

“I think the enthusiasm of the people and the energy make up for smaller sized audiences,” Santiago said, adding that Gallup audiences always emit positive energy for the performers.

“It’s a give-take relationship between the performers and the audience,” he said. “The connection is always here for that, people love the (Gallup) vibe. We always hear that this was one of their best stops on the tour.”

An upcoming show will likely draw a large audience.

Psychopathic Records recording artist Ouji Macc is scheduled to perform at Juggernaut Music Nov. 11 for the Say It To My Face Tour. Expect fans of Insane Clown Posse to show up in force,

Albuquerque and Gallup rappers are also scheduled to perform.

“We got a few more shows into the end of the year and we’ve already started booking for 2022,” Santiago said. “Everybody stay safe and do your part so we can get past this (pandemic).”

For the passion, love

Rich Nguyen, lead singer for BIAS, said the band was itching to play after nearly two years locked in COVID protocol isolation. The band drove to Gallup after performing in Denver Oct. 25.

In 2018, BIAS conducted a worldwide search for a lead singer. Nguyen was selected to serve as vocalist and the band has been gaining strength and musical prowess since then with their songwriting.

Nguyen’s vocals echo Lajon Witherspoon of Sevendust. Staying prolific is the secret to success for the band.

“We’ve been writing, recording, playing and trying to release as many songs and singles as we can,” Nguyen said. “COVID really messed everything up.”

The life of a musician is tough and everything’s a challenge because rock is dead, Nguyen believes, pointing to the electronic sounds enhanced with autotune as the primary culprit for the lack of originality.

“There’s no sway, there’s no humanity anymore,” Nguyen said. “If you watch the music awards shows, they don’t even televise the rock portion of the show anymore.”

BIAS hunkered down over the past two years, reporting to duty for their day jobs while writing music during their free time.

Nguyen believes that musicians are a dying breed and he continues to write music out of passion and love, sentiments shared by his bandmates.

“All we did was write (during the pandemic),” he said. “I think we wrote a lot of great material in that time.

“We have an EP out now and we’re planning on releasing another EP in January or February 2022,” he said. “After that, we’re looking at getting into the studio to record a full-length album.”

Performing at Juggernaut Music and seeing the instruments displayed throughout the store brought back memories of a thriving music scene for Nguyen.

“When I was growing up, kids were going to music stores like this, getting guitars, practicing and joining bands,” he said. “I would love to see that again. Just do it for the passion and the love.”

Kirtland, New Mexico-based Signal 99 have been performing since 2007. The band released three albums and honed their musical chops by touring the country.

Lead singer and guitarist Chuck Haven said he has three shows under his belt since the COVID-19 restrictions were loosened earlier this summer.

“It’s all different, but it feels pretty good getting back out there,” he said. “It feels good to sweat.”

Over the years, the thrash metal band has cultivated a loyal following for their proactive Native voice and political messaging.

In 2014, Signal 99 released “Banner of Corpses,” including a music video for the song.

The video features stop-motion animation, photos of Native American atrocities, including the Long Walk, while pummeling guitars are meshed with lyrics speaking to the correlation between the Native American genocide and Jewish holocaust.

“Hitler studied American history and saw how (the federal government) rounded up Native Americans and that’s how he did (the holocaust),” Haven said. “When I put out this (“Banner of Corpses”) video, it wasn’t a big deal. But now with this new political climate, it’s different.”

After getting flagged on You Tube, the video was banned in more than 40 countries before it was ultimately taken down.

Haven said others who spoke of the correlation between Native American and Jewish genocide were also censored.

“People find it hard to believe that America is capable of those things, but it’s something that I continue to put out there and fight the censorship,” he said.

Before the pandemic closed all music venues across the country, Signal 99 was touring and received opportunities to play in Mexico in 2019. Dead Sea Records, Signal 99’s record label at the time, provided logistics for the tour.

“Wow, who would have known that music would have taken me to different country and experience their culture while learning about myself,” Haven said. “I was told that being Indigenous, you’re always going to be two steps behind. You always have to work hard and go for it.”

Since the easing of pandemic restrictions opened music venues across New Mexco, War Motor has played five shows under the Juggernaut Music banner.

“All the shows we have played this year have been here at the Juggernaut,” he said.

The band has been performing together for a decade and they are currently recording their first album under the Jugg Life independent music label, also operated by Santiago.

Because of War Motor’s relationship with Juggernaut Music, the band has opened for such national acts as Skeleton Witch, Havok, Hatchet, Warbringer, Helstar, and Alien Weaponry.

Moses said the Juggernaut shows are down-to-earth events that are often family oriented, both appealing aspects for he and his bandmates.

“I always tell my (Native) brothers and sisters that it’s my soul that’s coming out when I play music,” he said. “People get to have a little part of me. It’s the energy of all those souls, hell yeah.”