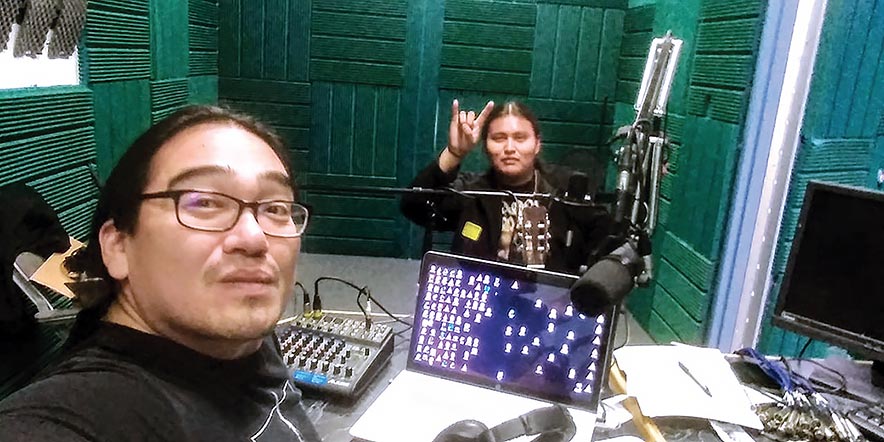 For 20 years now (excluding 2020 for obvious reasons), a handful of people at the Grand Canyon have been treated to a professional string quartet playing pieces composed by Navajo and Hopi high school students as part of the Grand Canyon Music Festival.

The pieces — the first compositions for most of the teens — vary in quality, but the stories behind them are what intrigue composer Michael Begay of Tuba City, who coached a lot of them under the festival’s Native American Composer Apprentice Project.

Begay, a NACAP alumnus himself, always felt both the compositions and the stories deserved a wider audience. So this spring, just before COVID derailed a bunch of other stuff he was working on, he obtained a grant from the Lewis Prize for Music to develop a podcast where he would interview a couple of young composers every week and play their music. The theme, according to Begay, is “How we compose music and what it means to us.”

The show officially launched on Aug. 28, (virtual) opening night of the Grand Canyon Music Festival. “I didn’t really know if it would take off,” Begay admitted. “I just wanted to make something that I would like to listen to.”

Turns out Begay is not the only one who finds young Native composers interesting. The podcast, “Original Score: An Indigenous Perspective on Music,” has so far caught the attention of the Albuquerque Journal, the Utah Division of Indian Affairs, the Museum of Native American History and more. This week, he has an interview scheduled with the popular National Public Radio show Performance Today.

Begay, 37, said he’s gotten feedback from all over the country. One section of his audience is the true music nerds, who are always looking for something different, but there are also people who don’t care a lot about the music but are curious about what life is like for modern Native Americans growing up on the reservation.

“I try to do a show about music that you can listen to even if you know nothing about music theory,” Begay explained. “I don’t use a lot of jargon.”

Assuming most of his audience would be located off the reservation, Begay occasionally describes the landscape as he motors to his next destination (that is, before COVID set in; now most of his interviews are via Zoom).

Before hearing from a Chinle composer, for example, the audience learns the name of the town is Navajo for “Where the Water Flows Out,” referring to the mouth of Canyon de Chelly. “I’ve got this whole car vibe going on,” Begay said.

But mostly, he gently prods the kids to talk about their compositions and their lives. The genius of the show is his interviewing style. Teenagers are notoriously bad interviews; ask any journalist. But Begay has a way of drawing them out. “For one thing, I’ve worked with a lot of them, and a familiar face goes far with kids,” he said. “Raven (Chacon, the other composer who works with NACAP) and I are not your typical composer-looking dudes. We’re more the accessible, rocker composers.”

Both men play in bands in addition to writing serious music, so Begay is all ears when the kids talk about their own garage bands.

Begay is also one of the few radio people who are comfortable with a little silence. “I take (the interview) at the kid’s pace,” he said. “Sometimes it takes them a while to get things out.” And he doesn’t assume that, just because they’re young, they have no experiences to share. “Teenagers actually have a lot to say,” he noted. “They’re just not used to people listening to them.”

In the first podcast, in which Begay interviews teen composers Gemal Benallie of Chinle and Xavier Ben of Tuba City, the teens talk about the inspiration for their pieces.

Benallie, who divides his time between Chinle and Phoenix, wove together two melodies, one slow for his tiny hometown and one fast for the southern metropolis.

Ben, on the other hand, finds Phoenix “boring” and derived his inspiration from a dream he had about a crystal that emanates an evil purple light. In “Nuclear Crystal,” he posits “greedy people” using the crystal for personal gain and disrupting the formerly peaceful world, represented by a flowing introductory melody.

“There’s a lot more on these young composers’ minds than people know,” said Begay. “I find it very compelling how every one of them has a unique story to tell. NACAP has given them the tools to express themselves through music.” Begay has made six podcasts available now and says they’re getting better as they go along. In the near future, he hopes to interview some Hopi composers and Diné singer-songwriter Sage Bond.

Information: Listen to the podcast at mixcloud.com/original score. Learn more about Begay’s own music at michaelbegaymusic.com