By Stacy Thacker
Special to the Times

The couple longed to be back on the reservation, seeing new sites, revisiting old ones and taking care of their grandma in the process. 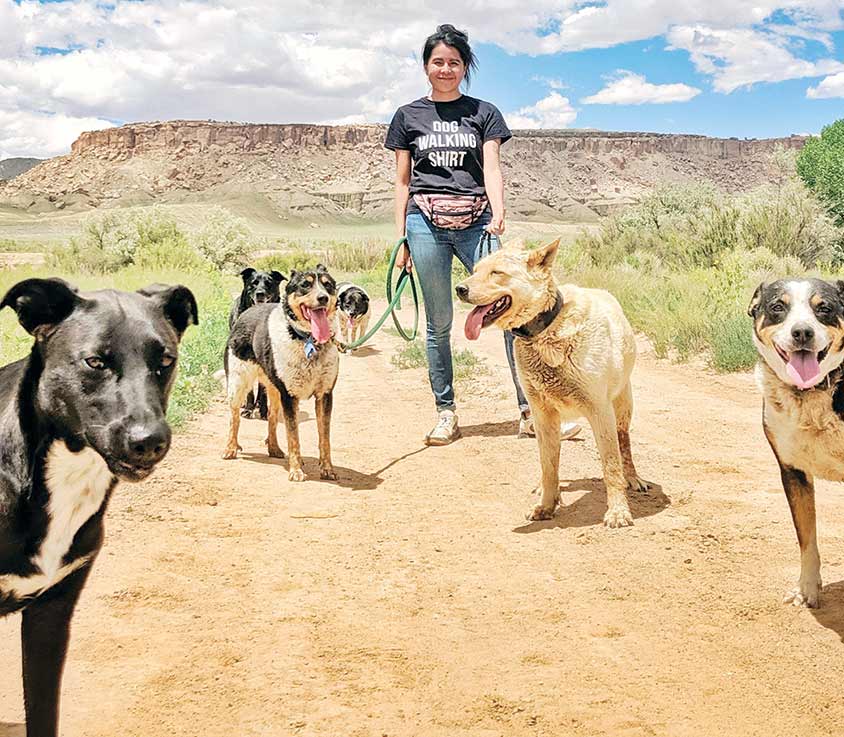 Courtesy photo | Rez Roads Adventures
Chantal Wadsworth poses with her dogs while on a walk. Wadsworth and her partner, Vernan Kee, spend their free time rescuing stray dogs across the Navajo Nation.

They started Rez Roads Adventures on social media to share their travels and to educate followers on the significance of the areas they were visiting. But now those travel pictures share space with posts about recent dog rescues and resources about pet care.

“You can’t miss the stray dogs and stray cats problem on the Navajo Nation,” Wadsworth said. “You see them everywhere.”

Before the pandemic, the couple traveled across the reservation on a regular basis with their six dogs and along the way they were picking up as many stray dogs as they could fit in their van. The most they’ve saved in one day is eight dogs.

“We literally have crates now that we keep in our vehicle,” Wasdworth said. “So whenever we see a stray dog, we literally just pick them up, put them in the crate and we’re on our way.”

Two years ago the couple started feeding stray animals but it didn’t feel like enough. Then they learned about different rescue organizations that find homes for rez dogs and they shifted their focus.

“Some of the dogs we come across are really bad,” Wadsworth said.

They need more than food, she noted. They are skinny and badly need medical attention.

“Most of them are starving, they have mange or they have ticks and they aren’t getting the help they need,” Kee said.

Rez Roads Adventures partners with a number of rescue organizations and shelters off the reservation. They also work closely with the rescue center in Shiprock, Turquoise Paw.

Stray dogs and cats aren’t a new issue on the reservation and over the years many off-reservation organizations have helped strays find new homes with families across the country.

But Rez Roads Adventures hopes to be an additional on-reservation resource and they want to help local organizations continue their work with stray animals.

The most rewarding part of rescuing animals is seeing how happy and healthy they are in their new homes.

“There are so many dogs waiting for that chance and that chance is out there for them,” Wadsworth said.

The success stories inspire the couple to go out every week to save as many animals as they can, on their own time and at their own expense.

They spend eight to 12 hours a week rescuing dogs and hold fundraisers on their social media page to help with the costs of buying dog houses, beds, collars, leashes, food and other supplies.

Kee, a graphic designer, creates limited edition designs for T-shirts and sweatershirts for the fundraisers. The couple receives donations as well. 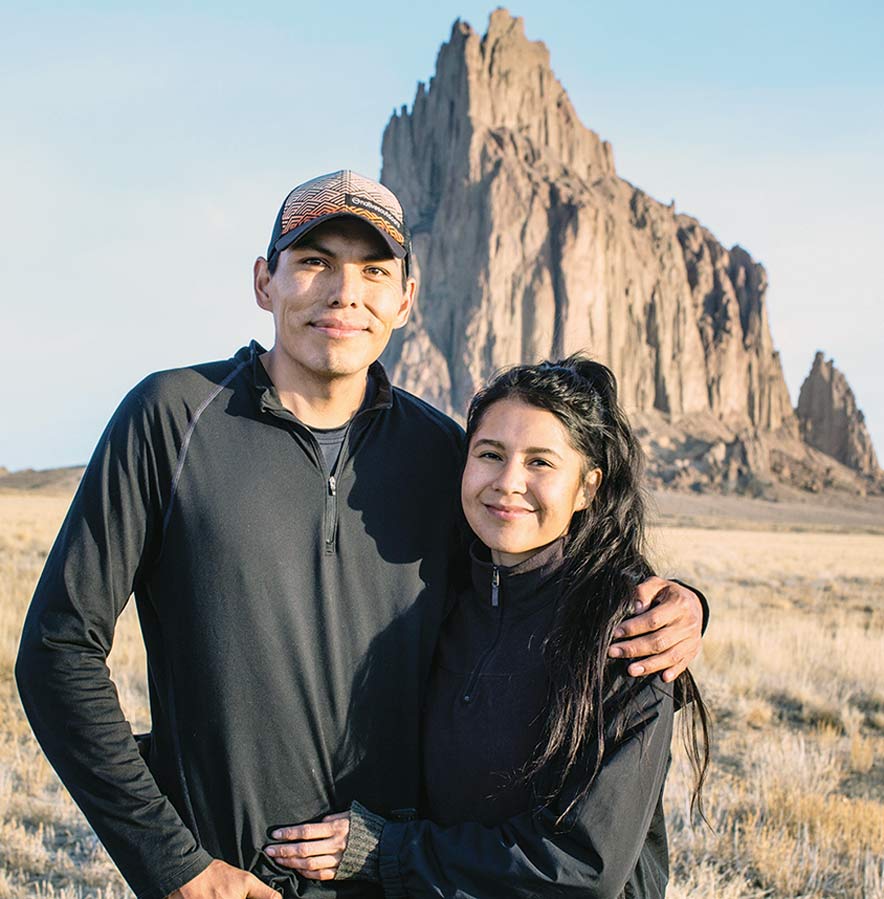 The fundraisers started out with a need for lumber to build two dog houses but they received enough money to buy 30 dog houses. Now their fundraisers help them buy more supplies that they donate to dog shelters and to local dog owners on the reservation.

If they see an old broken dog house they’ll drop off a new one. They aren’t shy about pulling up to random houses to see if dog owners need supplies.

But before they give out dog houses, Kee makes sure they are “rez proof.” He seals up any spaces and makes sure the house is sturdy and ready for the harsh reservation weather.

“We don’t want them breaking apart on Grandma,” he said.

The house calls are also an opportunity for them to talk with the owner, offer any resources or educate them on how to best take care of their animals.

“Most of the time the owners do want help with their dogs, they just don’t know where to go, they don’t know who to reach out to,” Wadsworth said.

The couple pushes education as much as they can. They want owners to know that rez dogs want to be taken on walks, they want to play, they want attention and they don’t want to be tied up outside in one spot with no way to move around.

They also let owners know about spay and neuter events as well as how to surrender a dog they might not want anymore.

As more organizations and more resources come to the Navajo Nation to help stray animals, the couple hopes to see fewer abandoned and abused dogs.

“Most of them are scared because either they’ve been strays for a long time or they didn’t have good owners so they’re scared of humans,” Wadsworth said.

The couple has learned to catch skittish dogs but it was a hard lesson.

They spent a week tracking a dog near Shiprock and when they tried to get near it, it always ran away.

Every time the couple was in town they’d look for the dog, hoping to see it but they never did. When they finally found the dog, it was too late.

“We got there just when he was about to pass away and he passed away in our arms,” Wadsworth said with a shaky voice. “It was devastating because it was the first time we actually tried and it was that outcome.”

The dog had been hit by a car. They saw the dog on the side of the road and stopped to check on it.

“I was there crying and trying to do something,” Kee said.

After that heartbreaking incident the couple knew they couldn’t give up.