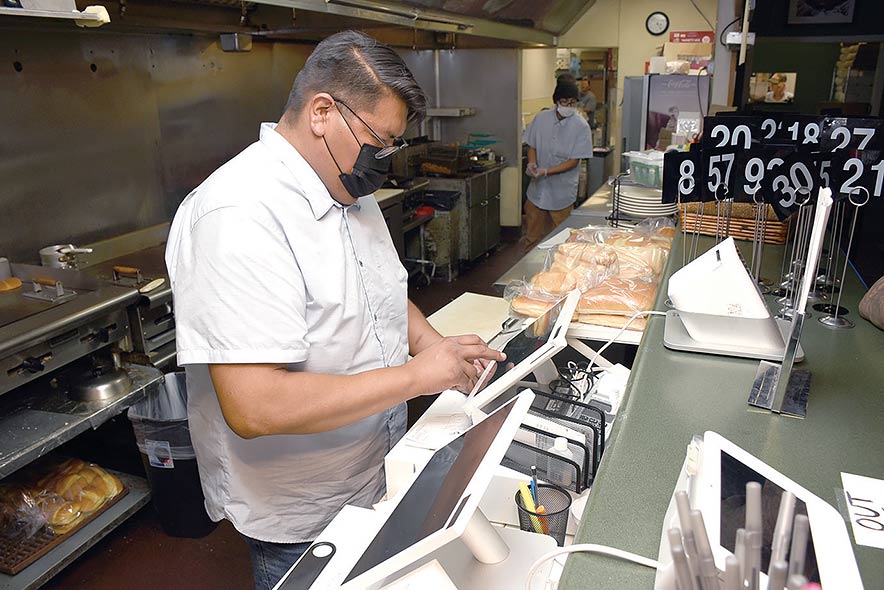 Navajo Times | Krista Allen
Chef Cedric Tadytin, co-owner of Slackers on Elm Street in Page, Ariz., uses an electronic cash register to ring up an order for a customer during the business’s reopening on Friday afternoon.

When chef Cedric Tadytin walks into Slackers, he reflects that the restaurant belongs to him and his brother, Christopher Chief.

“There are times I still don’t believe it,” said Tadytin, who signed legal documents for the Page-Lake Powell restaurant on March 28.

On Friday, Tadytin and Chief, the general manager for Dixie’s Lower Antelope Canyon Tours, hosted a grand reopening with Navajo tacos and Navajo burgers on the menu – likely the first in its 26-year history.

The business partners are the first Diné to own the longtime restaurant, which includes the next-door Big Dipper ice cream shop, previously owned by Chris Shores.

Shores told the Navajo Times in September 2018 that he took over business operations in 2008. Slackers and the Big Dipper were owned by Jim J. Hunter and his wife, Belinda Hunter. 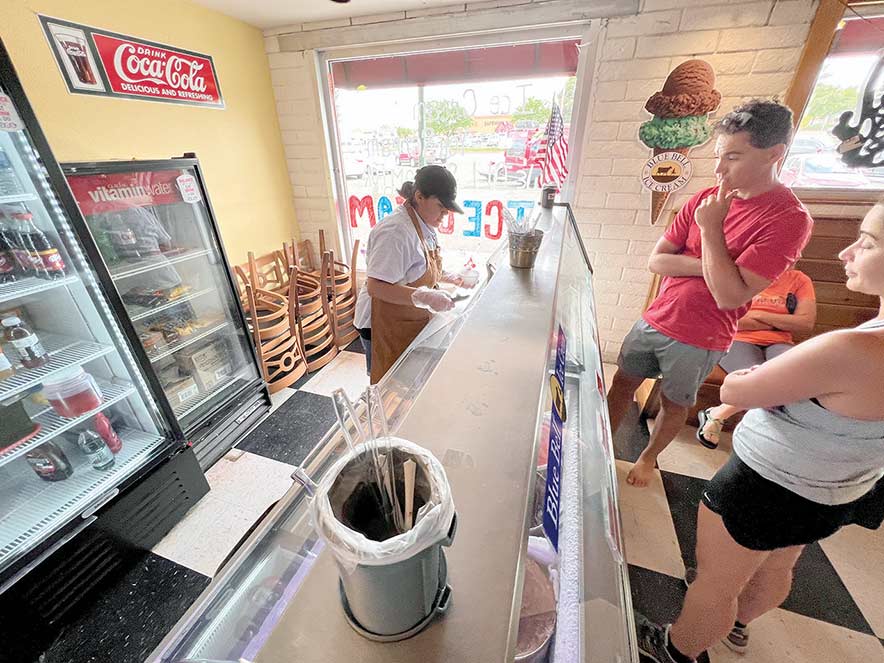 The restaurant opened in 1979 and became “The Sandwich Place” in 1982. It was located in Page Plaza. Fourteen years later, the owner at that time rebranded it “Slackers.”

Because Slackers’ kitchen isn’t equipped with a burner, Tadytin had to bring in a portable one for cooking frybread and chili beans from scratch on reopening day.

“It’s not designed to have what a (commercial) kitchen would, even though it’s an open concept kitchen,” Tadytin explained.

Tadytin is the former executive chef/general manager at Rimview Terrace, a fine dining restaurant owned and operated by Kenneth and Emily Young’s Western Circle Group of businesses, including Ken’s Tours.

He said he left Rimview at the end of February after helping the Young family build the Rimview restaurant from the beginning.

“After leaving Rimview, I consulted around for about a month before a friend told me that Chris Shores is selling (Slackers),” Tadytin said. “So, I sat down with him to talk, and we started negotiating until we agreed on a number.”

Tadytin and Chief have a kitchen staff of 29, including five of his nieces and nephews.

Shores had been trying to sell Slackers and the Big Dipper for some time. After meeting with Tadytin and Chief, he knew the local business partners would be the right fit.

They met with several lenders and investors and applied for a business loan/line of credit but were denied.

“It was a roller coaster,” he said. “Toward the third week of negotiations, my brother (Chief) came to me and said, ‘I have an investor who believes in us.’

“So, we sat down with them, and from there, it was super fast (from) sitting down, talking, to making an agreement,” he said. “Within a week, we had the money, and we had a purchase agreement, and we were owners. Everything happened so quickly, and it was crazy.”

Tadytin is now training his staff, some of whom are short-order cooks, to build on essential kitchen skills.

“So, it’s building up their skillsets first before integrating what we (he and Chief) want to do,” Tadytin explained.

Shores said Slackers attracts up to 400 customers per day and 500 on busier days.

On the Big Dipper side, he saw an additional 100 customers.

Big Dipper’s best-selling flavor is the Superman ice cream, a swirl of blue, red, and yellow – the colors of Superman’s costume.

Slacker’s best-seller is the cheeseburger, followed by the steak and cheese sandwich, and the pepper steak, an original from the early eighties.

“But we’re slowly integrating things,” Tadytin said. “We’re switching out some of the products we’re using. I’m a big believer in having a good product/produce. There isn’t much you can do to it, and just let it showcase as it is.

“So, we switched out things like lettuce, tomatoes, and how we process things,” he said. “We’re still working on it.”

Tadytin and Chief said visitors won’t see a change in the menu, but they’ll start to notice a different taste.

“So, Navajo Tacos and Navajo burgers are going to be part of the staple,” Tadytin said. “We’re just getting staff used to trying it out. We’ll (have those menu items) on the weekends for now.

“Once we get fully integrated into how we do things, it’ll be on the menu full time,” he said.

“Of course, we’ll be cooking our pepper steaks with prime rib roast as opposed to bringing them in pre-sliced and pre-portioned unmarinated sirloin,” he said. “Things like that and knowing where your produce and products come from.”

Tadytin said he always dreamed of opening a restaurant because food is his passion.

He started from humble beginnings as a line cook at DAM Bar & Grille and worked up to executive chef/general manager for Rimview.

“For 12 years, I really focused on my career,” Tadytin said. “I missed out on family events, birthday parties.

“I missed out on time with friends, not going on vacations because I really wanted to open my own restaurant,” he said.

“So, Chris and I, buying Slackers, I feel very humbled,” he added. “I don’t like being second place. I love doing everything to the best of my ability. We definitely won’t be just a burger joint.”