‘Food has always been medicine’: Siblings start traditional food truck business to give back 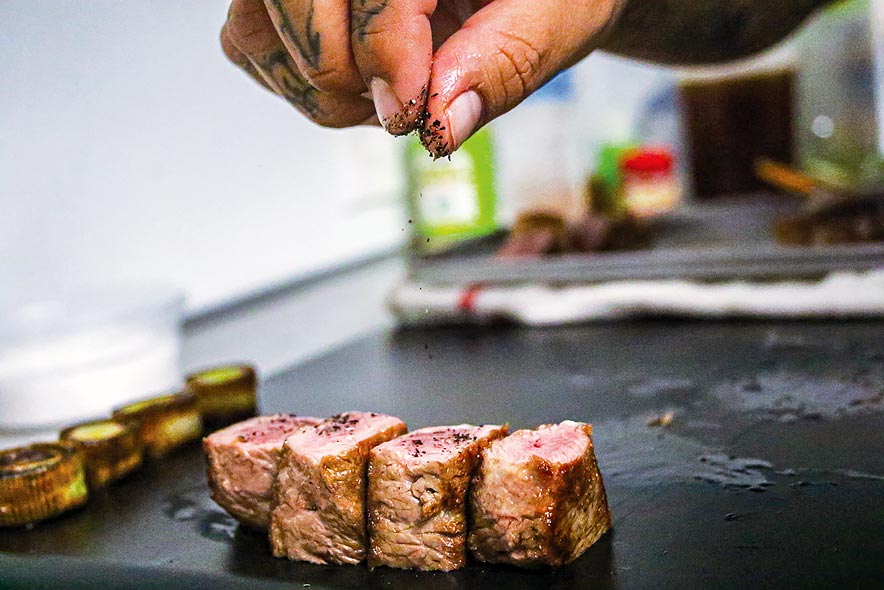 Navajo Times | Cyrus Norcross
Justin Pioche adds what he calls, “other friends” to the seared lamb loin on Jan. 21.

Picohe Food Group, or PFG, is a Navajo-owned and -operated food company that started providing high-quality meals in 2019 and became a business in 2020. The goal is to promote Navajo history, culture, and traditional practice to Diné communities.

Justin Pioche, an executive chef for PFG, started his culinary career at 17 when he joined the Farmington Mexican restaurant, Francisco’s. At the restaurant, he was mentored in fine dining and noticed the head cook managed the kitchen like a French chef. 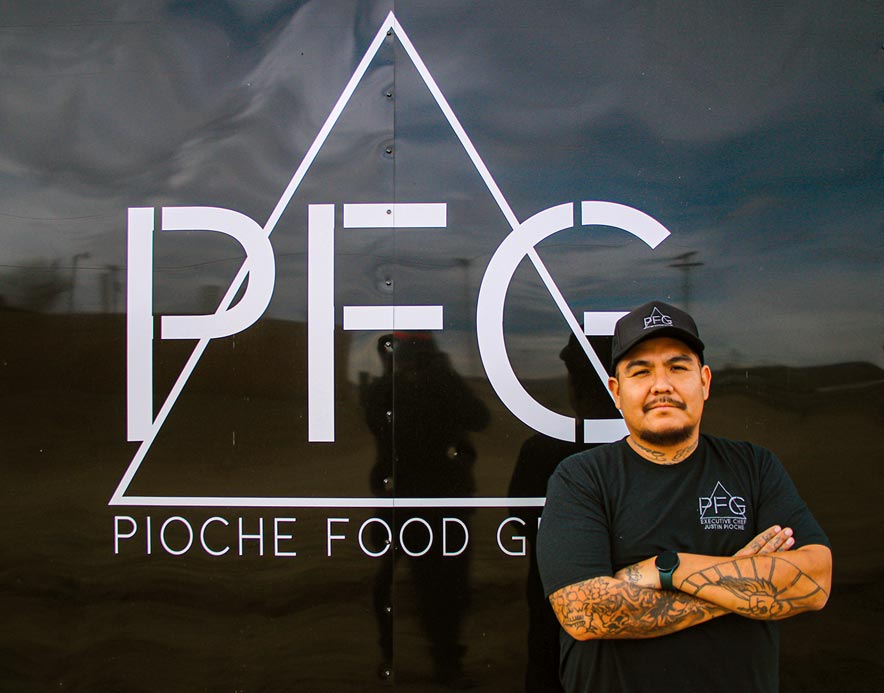 Pioche disenrolled from the school after a semester because he disliked how classes were only twice a week and cooking didn’t happen. He returned home in hopes of becoming a rock star.

“We had a band called April O’Neil,” he said. We were getting popular in the Four Corners area. It was cool, but my mom sat me down and said, ‘Is this going to pay your bills?’”

His mother steered him toward pursuing a career in the culinary field and encouraged him to pursue a degree in culinary arts at the Arizona Culinary Institute in Scottsdale.

Once he graduated from Arizona Culinary Institute in 2014, Pioche’s culinary career started.

He worked in various fine dining Phoenix restaurants, such as Elements at Sanctuary in Camelback and Blinkey’s Restaurants in Phoenix.

At each restaurant, head chefs Kevin Blinkey and Beau MacMillan taught Pioche about the food business and helped him become creative with his culinary craft. He moved back to Upper Fruitland and worked at chain restaurants in Farmington.

“It made me sad because we were cooking the same thing every day,” he said, “There was no room for any changes or creativity whatsoever. I became really depressed.”

When Pioche got the opportunity to go on a trip to Israel, he started hosting pop-up dinners to raise money for his trip. He called his temporary business “Pioche-S Catering,” and served fine dining to his customers.

When he returned from his trip, he and his sister, Tia Pioche, decided to continue with pop-up dinners in the Four Corners area.

“My sister and I were like, ‘Why don’t we make this a thing,’” he said, “We came up with the name Pioche Food Group.”

Tia started working in the food business when she was 10 years old by helping her older brother with his catering. When she turned 18, she entered the food industry as a hostess, moving through different positions such as server, manager, and trainer.

As Pioche Food Group started to grow, Tia left her job and focused on PFG. Tia said she has no plans on becoming a professional cook herself as she wants to focus on the PFG’s hospitality aspects.

“I plan on focusing on the food hospitality part of it,” she said, “Being a food service manager, learning about the food, how to present the food, giving guests the full service of where the food is coming from, and being the front of house of the food business.”

To hone her skills as a food service manager, Tia began a three-week unpaid internship at Confluence in Cave Creek, Arizona. This unpaid internship is typical in the food business and is called stagiaire or stage (pronounced “stahj”), a French word for apprentice, trainee, or intern.

Stagiaire usually works for free only for a brief time to gain experience in the kitchen or serving, learning new techniques under the guidance of a mentor.

“I’m getting more front of house experience,” she said, “I’m learning about wine tasting, pairing wine with certain foods, and serving as well.

“The manager I’m working with, she used to be the front of house manager for Binkley’s Restaurant,” she said, “I really look up to her and take on learning from her and see how she manages her restaurant.”

PFG aims to share Indigenous meals with high-quality service. Its mission is to be an eco-friendly and a little-to-none waste food program in New Mexico by sourcing ingredients locally as much as possible.

The siblings wish to showcase knowledge and creativity through their flare of traditional Navajo foods and global gastronomy, utilizing technology and modern techniques and, at the same time, supplementing produce from local farms.

“In order for me to find my own identity, I needed to know about where I came from, my people, my history,” Justin said. “So, that’s when I started digging into my culture and history.”

“We use food in our ceremonies,” he said. “We celebrate with food, it’s really powerful.”

As PFG expands, the siblings enjoy experimenting and adding flair to their dinners and meals. But when it comes to creating traditional Diné food, the siblings stick to the basics.

Pioche Food Group will provide pop-up dinners in various places across the country, such as Alaska, Minnesota, and Oregon, giving food back to the people.

PFG can host private dinners and be booked on the company website and social media under Pioche Food Group. PFG’s next supper club nine-course dinner is set for Valentine’s Day in Farmington, and the dinner is called “LorAmy Supper Club.”