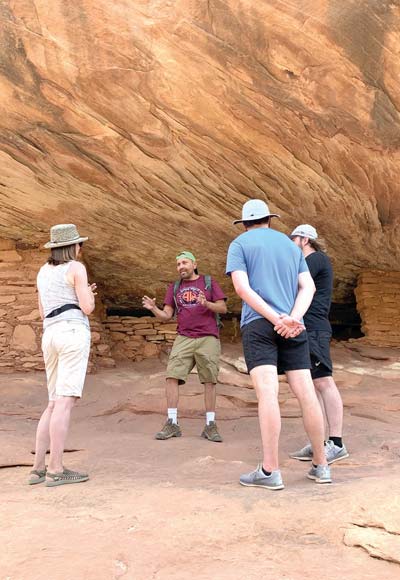 The Native guides would be lost in daydreams of owning an Indigenous recreational outfitter as they grilled burgers and hotdogs for guests of a non-Native concessionaire in southeastern Utah.

Louis Williams – a professional cook, adventurer, hiker, and an expert river runner – reminisced about his days as a river guide, telling the other guides he couldn’t believe he served fast-food sandwiches to guests wanting to experience the most authentic Canyon Country.

Ancient Wayves originated in 2019, but it didn’t become official until Feb. 20, 2020. Williams recently obtained a business site near the post office, close to the San Juan, in Mussi, Montezuma Creek, Utah.

When Ancient Wayves opens for the season this year, Williams and his expedition teammates will be working closely with their guests to ensure the menu suits guests’ needs.

“I want to smell fry bread on the river,” Williams said. “I want to have some mutton stew, some neeshjįzhii, served out there because that’s what people want to do out there.”

Williams has run the San Juan bordering northern Diné Bikéyah in the Sash Jaa’ region since 2012.

He’s navigated the length of the waterway, which features Class II and Class III rapids that require some technical boating skills.

But the San Juan isn’t particularly safe when the water level is low because classification can reach Class IV rapids – large waves, narrow passages, and multiple obstacles to avoid.

“I do river rafting and hiking; backpacking full time,” Williams said. “That’s where I got inspired, just being out there and working for other outfitters.

“I always thought it’d be awesome to have a Navajo-owned outfitter because we, Navajo guides, this is our backyard,” he said. “As you float the San Juan River left, which is the south side – river left is all Navajo Nation, all the way to Lake Powell.”

The Bureau of Land Management manages the river from Mussi to the Glen Canyon National Recreation Area boundary, around river mile 45.5.

The left bank of the river, from Mussi to Trimble Camp, is managed by the Navajo Nation, which requires additional permits to camp, hike and visit archeological sites on the river left.

“We’re the only group that’s out here in the Bears Ears region,” Williams said. “Leading tours and guiding tours.

“We’re trying to encourage Natives, Navajos to be out here, to be stewards of the land,” he said. “That’s what Ancient Wayves is all about.”

Williams said there’s much involved in being a river runner because guide-work means being an educator and giving guests, including scientists, new insights into the archeology, environment, botany and geology of the Shash Jaa’ region.

“That’s pretty much a requirement to being a guide, sharing all that with people because there will be a lot of questions from guests,” Williams said. “Being in the region we’re at, Bears Ears National Monument, people are interested in Bears Ears because of its popularity grew over the years and its monument status.

“People out here, they want to learn about the culture, the history,” he said. “What better way to do it than with an Indigenous guide.”

Ancient Wayves is still growing as a business, and Williams is marketing his business concurrently with networking Indigenous stewards of the land.

Because Ancient Wayves is an outfitter in the Shash Jaa’ region, it must have permits with various agencies such as BLM, state of Utah, and the Utah School and Institutional Trust Lands Administration.

Ancient Wayves is the first Navajo-owned outfitter granted a permit to operate commercial tours on the San Juan, according to NNPR.

“We’re connecting the Navajo Nation and other agencies that manage the public lands,” Williams explained. “It’s a pretty exciting time regarding jurisdiction issues. It’s something that hasn’t been brought up. It’s the first time a Navajo (outfitter) company has gone to the BLM asking to run river tours and actually have a permit.

“So, we’re waiting on a decision. We’re patiently waiting,” he said. “Hopefully soon, we’re gonna be getting some word from the BLM about running tours on the San Juan River.

“Although we have a permit with the Navajo Nation,” he said, “we’re still unable to run commercial tours on the San Juan River because of the management issues.”

Williams said BLM is now working with the Nation, and that’s never been done.

“We’re (motivating) everyone to work,” Williams said. “We’re (at Ancient Wayves) just the cheerleader. We’re just encouraging these organizations to work together, and they’re trying to do their best, too.

“We’re representing the Navajo Nation up here,” he added. “That’s why it’s so exciting. We’re pretty well known in Utah, among the river-rafting communities that run the San Juan River.

“And they’re (non-Native outfitters) excited to have a Navajo company be on the river,” he said. “And most of the reactions are, ‘It’s about time.’ Everyone’s cheering us on, even the BLM.”

Williams said the Native guides for Ancient Wayves are in demand, and the season will be busy.

“I need to recruit more guides because we need to be out there taking care of the land,” Williams said. “We’re stewards. I’m involved with Friends of Cedar Mesa, and they take care of the land – the trails, the sites.”

Land stewards include NavajoYES, which is working to create more trails in the Nation.

“We’re really trying to get involved with the Navajo Nation about outdoor recreation,” Williams said. “There’s not too many opportunities for people to get on the river, so that’s why we’re excited to be out there and to provide that opportunity.

“We want to do a trip with all the cheii and másáni, our leaders,” he added.

With the help of Tsé Kooh Outfitters, which runs the San Juan, Williams took NNPR employees down the San Juan from Bluff to Mexican Hat.

“I was trying to get Martin Begaye (department director for NNPR) out here, but he was so busy; he sent everybody else,” Williams said. “They were all out here, and they saw firsthand what was going on. They noticed there was no land management considering permits and regulating those permits.”

NNPR employees also saw that the land is overrun by invasive species that cause the extinction of native plants and animals. They saw the undisturbed land and the wild donkeys along the river.

“We floated river left,” Williams said. “Ever since then, we’ve been bringing awareness. I’m inviting everyone as much as possible because it’s very important.

“That’s what encouraged me to start this (recreational business). I’m out there. I live out there,” he said. “I’m out there 25 days out of a month, on the San Juan River.

“I’ll constantly think and not see one ranger,” he said. “Out of the nine years, I’ve been on the river, I’ve seen only one Navajo ranger one time. I’d think, ‘This is not good.’ So, that’s what we’re doing, bringing awareness to the San Juan and to encourage people to get outdoors.”

Williams said people need to get outdoors, especially during this pandemic.

“As a family, go enjoy the outdoors,” he added. “Get outside.”