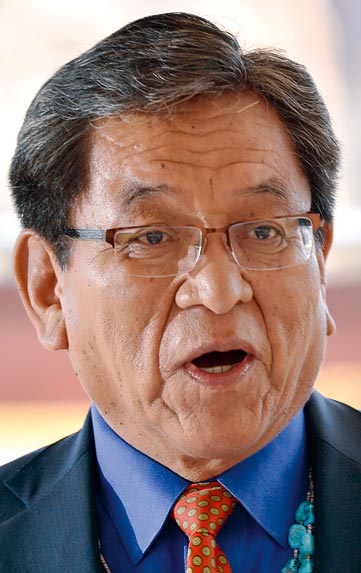 Navajo Nation President Russell Begaye is seeking support from committees of the Navajo Nation Council for a new approach to economic development.

The approach abandons the way the tribe has operated for the past 75 years and creates a new mechanism for bringing companies and jobs to a reservation that is still seeing unemployment figures in the high 40s reservation-wide and up to the 70s in the more remote chapters.

The old approach, he said, isn’t working and he is committed to showing the Council in the next few months that his approach will finally open up the Navajo Nation to off-reservation businesses that are looking for places to expand their operations.

“I am very optimistic that once members of the Council understand what I am proposing, they will support it,” he said.

But the question is whether he can convince the Council, which in the past has been reluctant to adopt changes of this magnitude. The new plan would basically dismantle the system now in place for approving economic development plans and change it to one in which the Council has no say.

The proposal calls for the creation of the Naat’aanii Development Corporation, an entity that would replace the Council as the decision-making body when it comes to bringing new businesses to the reservation.

The problem with the current system, said Begaye, is that it is too political and bureaucratic.

Any company that wants to set up operations must go through a lengthy process of getting approval from the Council, a process that usually takes months and has resulted in failed proposals, such as the one for the BCDC plant in Shiprock that cost the tribe millions of dollars.

Robert Joe, the tribe’s chief operating officer, said the tribe gets letters from state programs in New Mexico and Arizona saying that a company is looking for a home for a new operation that will create 100, 500 or even 1,000 jobs.

All the companies want is a quick response but under the current system any response takes months when the company is looking for a final agreement in weeks.

The Council can’t do that, said Joe, but a company devoted solely to bringing in viable businesses to the reservation can.

The company would have complete authority to make these kinds of decisions and would operate separate from the Council.

There would also be a seven-member board of directors, which would include a certified public accountant, one member each with at least 10 years of experience in health care, federal contracting, hospitality and agribusiness, and one member to represent the grassroots traditional culture.