She feeds the fire before feeding herself and her customers because the fire is the secret to good cooking. 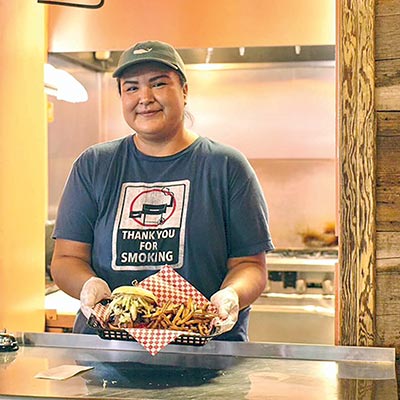 That’s what head chef Megan Thompson tells her employees as she’s building a fire in the offset smoker firebox at the Silver King Smokehouse and Saloon at 404 Main St. in Superior, Arizona.

“I always put my cork butt in there and give the fire some food,” said Thompson, a young Diné from Ts’ahbiikin, Arizona.

She controls all aspects of the kitchen at the Silver King. This means she’s responsible for creating menus, maintaining kitchen costs, and managing her staff, all of whom are non-Native.

And she’s been doing it for two months, but with the company – owned by metro Phoenix entrepreneur Justin Evans and Tony Fatica – for a year and a half.

She also served as Cook I at their Golden Pineapple at 2700 S. Mill Ave. in Tempe, where she created the “Navajo Fried Bread” on the menu.

Thompson was hired as a cook at the Silver King after opening in January 2020.

“That’s where I learned how to run the smoker,” she said. “There’s a lot of barbecue stuff, and everything we make in the restaurant is from scratch.

“All of our spices, our sauces, our side dishes – everything is made from scratch,” she said. “I taught myself how to run the smoker, trim meat.

“Recently, the head chef (executive chef Dell Morris) stepped down,” she said, “and I took his position.” 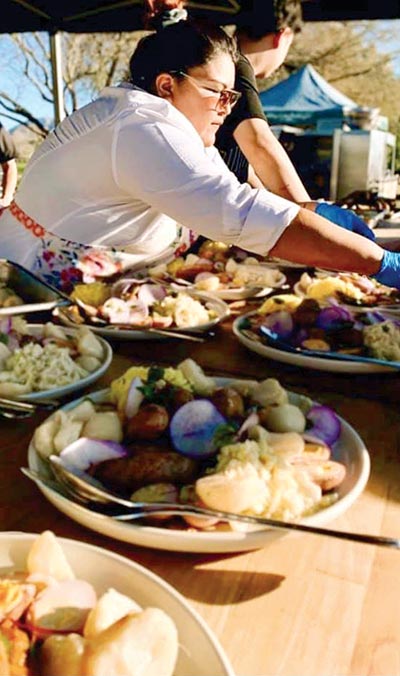 Courtesy photo | Megan Thompson
Megan Thompson, head chef at the Silver King Smokehouse and Saloon in Superior, Ariz., volunteers at an “Outstanding in the Field” event which brings together cooks from across the country. Thompson said she volunteered at the event where she helped another chef. In this photo, she is preparing dishes.

Growing up, Thompson cooked for the older people alongside her paternal grandmother, Jamie Noestine, a former supervisor for the Inscription House Senior Center.

“My grandma used to make food, and I always watched her,” she said. “What really got me into cooking was the summer youth program at Inscription House. I used to help at the senior center and cook for the elders, and I really liked it.”

In high school, she took culinary classes and after graduating she went off to Fort Lewis College for a year, during which she realized her passion was cooking and that’s what she wanted to do.

So, she enrolled at the Le Cordon Bleu College of Culinary Arts in Scottsdale, where she completed the culinary arts program before the school shut down in 2017.

Her first job was at Shula’s Steakhouse at Wild Horse Pass in Chandler where she worked every single station and learned just about everything over five years before leaving to work at smaller restaurants to learn different cuisines.

“I wanted to build my culinary knowledge,” Thompson said of her leaving Shula’s. “I worked at some mom-and-pop shops. Then I got a job at Four Seasons in north Scottsdale, and that’s where my creativity grew.”

Thompson was working her way up through the ranks, from Cook III to Cook I, when the coronavirus entered the U.S. and she lost the job at the Four Seasons, a luxury five-star resort.

“(Evans and Fatica) opened a new restaurant called the Golden Pineapple in Tempe. He (Morris) asked me to work for him as a Cook I, so I went there and took my fry bread recipes,” she explained.

“They (Evans and Fatica) opened a barbecue place in Superior, and they asked me to work out there (Silver King),” she said. “That’s where I learned how to run the smoker.”

Morris was the executive chef for the Golden Pineapple and the Silver King, and Thompson also served as a lead cook and the kitchen manager for Silver King before becoming head chef.

“Right now, at the Silver King, I’m working on new side dishes,” she said. “I want to add tóshchíín to the menu, and it’ll be a little fun.

“Instead of a traditionally made tóshchíín, I want to make it barbecue, kind of like grits,” she said. “I want to do a play with grits with our tóshchíín.”

She said that’s another goal: make Diné traditional food taste good with seasonings that pair well with them.

“I want to try smoking mutton,” she said. “I’ve never done it before and maybe run it as a special.”

The Silver King is located near the Apache Nation and many Dziłghą́’á Dine’é visit the restaurant and often ask Thompson if she’s going to make fry bread.

“Every now and then, I’ll make it for them,” she said.

Thompson said people who enjoy her food keep her motivated and inspired to continue her culinary career.

“People tell me it tastes good, and I’m doing a good job,” she said. “I really like making people happy with food, and it keeps my passion growing, and it keeps me wanting to do more and try new things.”

When the time comes to return home to the Navajo Nation, Thompson wants to start a food truck and sell food she learned how to make over the years. She’s planning to sell at swap meets and at flea markets around Diné Bikéyah.

“I think it’ll be nice because it’s nice to have that convenience to go somewhere to get food, and you don’t have to cook,” Thompson said. “Living in the Navajo Nation, you have the gas station where you can get food and sandwiches.

“So, I think it’ll be nice to able to get a sandwich without having to make it at home or having to drive to Page or to Tuba City,” she said. “Food does help you keep going.”

Thompson manages a staff of five at the Silver King. She’ll be teaching them how to make fry bread, run the smoker, and make food taste good so customers keep returning for more.

Thompson said she makes her fry bread the same as her grandmother, Mary Goodman, and her mother, Margaret.