In his new role as Northern Arizona University president, José Luis Cruz Rivera, a distinguished scholar and education leader, drew criticism with the release of his draft “strategic roadmap” for the university. 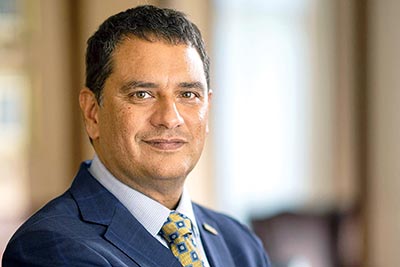 But after listening to feedback from faculty, he pivoted to accommodate their concerns.

The problem? The six new priorities for his roadmap would replace the existing NAU strategic plan’s five goals of student success and access, research and discovery, commitment to Native Americans, engagement and stewardship.

While it is common for an incoming chief administrator to review, revisit and refresh plans for an organization, the removal of the goal “commitment to Native Americans” was more than a little troubling to NAU stakeholders.

Also of concern was that the strategic roadmap team didn’t consult with NAU’s Indigenous scholars and experts in the Department of Applied Indigenous Studies, which was perceived as a lack of inclusion.

This in spite of the fact that Cruz Rivera has prioritized equity and inclusivity, especially for those who have historically been underserved.

Prior to joining NAU in June, Cruz Rivera served as president of Lehman College of The City University of New York. His full biography is available on the Arizona Board of Regents website.

The proposed goals for the strategic roadmap include:

After the first roadmap was released, AIS faculty members who are against the elimination of the original goal No. 3 met with the president and expressed their dissatisfaction with how the new plan is being put together and what the result has been thus far.
On Monday, Oct. 25, the issue was brought before the NAU faculty senate for discussion and action in which Cruz Rivera indicated goal No. 3 could still be preserved in the new roadmap.

Cruz Rivera reported that the new roadmap retained many of the objectives and past work contained in the existing strategic plan and his team had provided multiple opportunities for the university community and stakeholders to provide input.

“As we indicated, we wanted to make sure this was a very participatory process,” Cruz Rivera told the faculty senate. “I am very pleased with the level of engagement we have received to date.”

Cruz Rivera said his interim vice president for Native American initiatives, Ann Marie Chischilly, who is Diné, consulted with and will continue to do so with Native American advisory groups regarding the roadmap.

“There were some concerns raised regarding the fact that in our previous strategic plan, we had called out a separate goal for our Native American students and communities, goal number three,” Cruz Rivera said.

After listening to concerns from two colleagues from the Department of Indigenous Studies, Dr. Karen Jarratt-Snider and Dr. Chris Jocks, he asked the roadmap team for recommendations to underscore NAU’s commitment to Native communities, he said.

Cruz Rivera said he asked Jarratt-Snider and Jocks if his team could have some time to get a second draft “in good shape” to ensure that Native American communities are “front and center in the work that we do.”

He reiterated that from “day one” he has been unequivocal in his support for Native American communities and students.

“I am confident that with the support of all members of our university community, especially our Indigenous communities, that we will make sure that our roadmap reflects those values,” he said.

Jarratt-Snider did not mince words when she spoke on behalf of the AIS faculty that she chairs.

“We are the folks who work and have worked for decades with Indigenous peoples and we are an Indigenous nation-building department,” Jarratt-Snider told the faculty senate. “That means we stand firmly behind the principle of Indigenous self-determination and that means that Indigenous peoples must be allowed to speak for themselves.”

“When I spoke with President Rivera, I was very clear that part of our concern was that we weren’t included in the process from the beginning and that’s where I think things went awry,” she said.

Jarratt-Snider said removing goal No. 3 was a step in the wrong direction and serves to “invisibilize” Native students, faculty, and Indigenous focused programs.

“We are the only Indigenous focused academic unit on this campus,” she said. “We already have an issue with visibility. Without a stand-alone goal, we believe NAU serves to lose so much that it has gained over the past few years with Indigenous nations and communities, faculty, staff and students.”

Jarratt-Snider acknowledged that the president had asked for more time, which they granted.

“However, we have also asked to be more involved with the process than just listening sessions,” she said. “We are the subject matter experts in this area and we would hope that our experience and our advice would be valued. With anything involving Indigenous people, we would hope he would consult Native faculty in our department.”

Jarratt-Snider appealed to the faculty senate to consider what is at stake and stand with AIS faculty and the request to retain goal No. 3.

She said in the spirit of accountability, the NAU administration should also be accountable by retaining goal No. 3 as a stand-alone goal and continue moving forward with the objective of having NAU become the leading university serving Native Americans.

“I would ask the president, Vice President Chischilly, provost, and core members of the strategic roadmap team to please hear our call and understand how important it is, as Indigenous people, we must speak for ourselves,” she said. “We can’t have other people speaking for us. For millennia that’s happened with dire consequences …. I’m certain NAU wants to be on the right side of this.”

After the feedback from Jarratt-Snider, Cruz Rivera quickly responded saying he had no problem with the idea of retaining goal No. 3 in the new roadmap.

He also mentioned he would like to consider adding a separate statement to the guiding values for the strategic roadmap to ensure that NAU’s commitment to Native Americans is reflected as a theme throughout the plan.

“Based on conversations that I have had with many members of the Native American community, I think we will be able to have a resolution to this by draft number two,” he said.

He asked that everyone continue to work together in a collegial fashion.

“The reality is that we built a process that is participatory, that is working,” Cruz Rivera said. “We heard feedback. We’re acting on it and we will be circling back.”

In turn, Jarratt-Snider responded, “We want to be your allies and we’re here to help so we look forward to working with you to resolve this issue.”

Chischilly said in her experience Cruz Rivera has “bent over backwards” to meet the needs of Native American communities.

In a conversation on Tuesday, Cruz Rivera’s chief of staff, Brian Register, confirmed to Navajo Times that Cruz Rivera is willing to keep goal No. 3 as a stand-alone goal and guiding principle.

Register emphasized that the whole point of the strategic roadmap process is that it’s meant to be informed by the community.

The timeline to complete the 2022-25 strategic roadmap is by the end of the fall 2021 semester so that it can be finalized by spring 2022.

Register said if there is a gap or something that is crucially important missing in the roadmap, the president’s office wants to hear about it so that it can be incorporated.

“We’re encouraged to see that it’s working and to hear from so many people and to make sure it’s a plan that reflects all of us and all of our priorities, including goal number three,” he said.