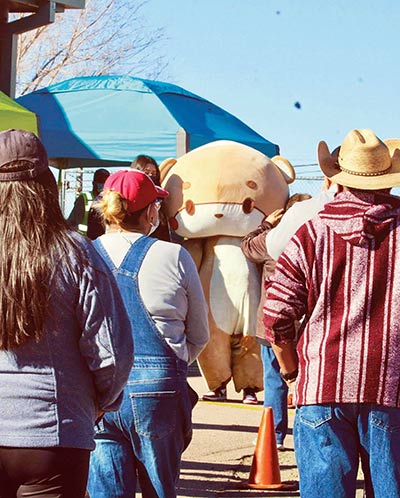 Submitted
Bearsun looks into a crowd of supporters as a meet-and-greet begins at the Window Rock fairground on Friday, Nov. 26.

That is exactly what Jesse Larios, otherwise known as, “Bearsun,” did. He walked from Los Angeles to New York City.

Bearsun’s walk took approximately four and a half months to complete. He walked from town to town on the backroads because he was not allowed to trek along the interstate.

Along the way, Larios attracted many supporters from every town he walked through. Now he would like to thank them for their hospitality. Larios is revisiting the towns he passed through, which includes our very own on the Navajo Nation.

On Friday, Nov. 26, at the Navajo Nation Zoo and Window Rock fairgrounds, the iconic bear came back to the Navajo Nation for his “thank you” tour. Lario’s journey concluded after he walked to raise awareness for multiple causes.

There was a GoFundMe account set up for each of these causes, which all exceeded their goals by the help of millions.

Bearsun’s walk brought many supporters together, many who donated, others who shared his social media posts, and there were many that walked alongside him, which included a multitude from the Navajo Nation when he crossed from Flagstaff onto the reservation.

Larios’s walk through the Nation helped many people escape thoughts of the pandemic and gave hope to all. He awakened spirits again, reiterating that Natives have not been forgotten.
He could have chosen different routes but chose to come through our reservation, and he was welcomed by many.

“A lot of our citizens have been hurt by this virus, we look for opportunities to lighten up the atmosphere and Bearsun got to be who he is, and everyone loved him,” said Vice President Myron Lizer.

Lizer said, “Our people loved the support, and the ability to get out, walk with him, and support while being mindful of the virus, our people are behind and around him.”

Larios as Bearsun was a beacon of hope for many Natives.

“It’s great to see Bearsun back, based on today, there were many that didn’t get to meet him at our previous event,” said President Jonathan Nez. “He’s raising awareness on many issues. It shows the dedication and heart that Bearsun has for people. He showed us that there is some hope.”

First lady Phefelia Nez said, “What differentiates Navajo people from people across the country? Navajos took his walk seriously and it is nice to see the outfit but we can’t forget that there is a person under the suit.

“His message is beyond that,” she said. “Jesse magnifies the compassion and love of many throughout the country while making a lot of Navajo friends.”

Larios as Bearsun will be returning to the Nation again in the future, as he plans to run from the state of Florida to Washington state. He will be running for veterans.

Along his walk, Bearsun met many veterans who spoke to him and that is where the idea was sparked.

Walking or running across the country is not for everyone but one man walked for everyone and brought many together as one.

From Bearsun’s journey we can learn that we can make an impact and raise awareness for what we are compassionate about. In a peaceful way, he emphasized, action speaks louder than words.