Bearsun’s effect: Why are Diné obsessed with man in bear suit? 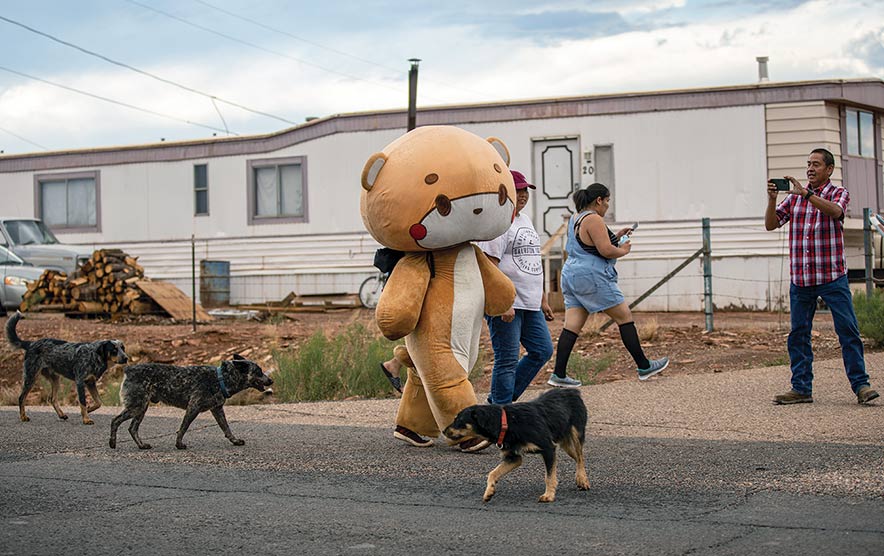 Navajo Times | Sharon Chischilly Bearsun walks with dogs while supporters and fans greet him as he makes his way into Dilkon Sunday evening in Leupp, Ariz.

The man, 33-year-old Jessy Larios from Los Angeles, in the shash yáázh daane’į́h suit he named “Bearsun,” for an entire week was greeted by hundreds of Diné who beamed when they saw him.

They snapped selfies with Bearsun and placed tá’dídíín on its head; fed Larios and made sure he was hydrated; offered him places to stay; said prayers for him; and walked with him alongside the highway toward Tsébigháhoodzání.

President Jonathan Nez welcomed Bearsun in Indian Wells, Arizona, and called the suited man “Shashjóhonaa’éí.” Nez posted a live video on social media – central to Nez’s public image and inspiring envy or a need for approval for the upcoming election.

“We’re trying to give you a Navajo name, Bearsun,” Nez said to the character outside Indian Wells Elementary School on Aug. 3.

“I think it’s going to be ‘bear sun’ in Navajo,” Nez said. “Shash means bear, jóhonaa’éí means sun. If we’re talking about the beams coming down, then that’s shánídíín.”

First of all, hataałii would say, calling Bearsun Shashjóhonaa’éí causes tension because Larios isn’t Diné and Bearsun is just a suit.

Our hataałii would say, calling the suit Shashjóhonaa’éí is exploitation and that takes more of our culture and traditions, which is what’s happening with our ceremonial songs.

I know this because I often talk with our nahałáhí and consult with them for stories – about language, history and traditions and culture – that I write.

Bearsun, an “adorable” plush “bear” in many people’s view, is like “Rilakkuma,” a famous Japanese mascot – a kigurumi or a full-suit costume.

Rilakkuma means “bear in relaxed mood” in Japanese, according to the character manufacture, San-X.

Everywhere Rilakkuma goes, it is lazy and relaxed. Rilakkuma is stress-free and does things at its own pace. Rilakkuma is also impossible to be hated by others.

But that’s not quite so for Bearsun.

Even after spreading love, joy, laughter, faith, hope, and healing – particularly after a tough year and reminders of the virus – and bringing heightened awareness of social justice issues that also affect our people, Bearsun apparently has some naysayers.

On Sunday, a search on Facebook showed some anti-Bearsun comments and images uploaded of Larios’s visit to Diné Bikéyah as Bearsun.

A search for “Bearsun” and “iambearsun” displayed hundreds of posts – usually with an image – reading how nice it was to find, meet and see Bearsun or that it was an honor and a privilege to walk with Bearsun.

Other posts said Larios as Bearsun sounds like a “stoner” and has become a “Rez Ted” that spits curses or that Bearsun is a “scam,” collecting money for his benefit and “is something that had to come about after smoking some strong stuff,” and that someone should steal Bearsun’s head.

These kinds of posts demonstrate a stark reality. Social media encourages people to cross the line to provoke and post messages from the margins to the mainstream.

“I invite all to come walk with me,” Larios wrote on one of Bearsun’s social media pages on Aug. 7. “Those that talk s—t ‘specially. I’ll show you a thing or two.”

I’m sure it’s complicated being Bearsun, breathing inside a 60-pound suit as the summer monsoon brought a humid climate and torrential rainfall to our area.

But Larios as Bearsun is someone people should listen to because the alarm is being sounded by a non-Diné man with a big platform.

Some of our people have said Bearsun is unwavering, upfront and passionate. In his Adidas, moccasins, or brand-new pair of Hoka shoes, Larios as Bearsun is unstoppable and an inspiration.

Larios is dedicated to walking to New York City but equally devoted to raising awareness and reaching potential donors for five causes – autism, cancer, the disabled community, environment, and mental health – even as he sweats in intense heat inside the Bearsun suit.

He’s also suffering a little for our people.

While we face our challenges in our Nation by simply walking with Bearsun, even for a few minutes, and showing support at meet-and-greets, this reflects something much more: how Bearsun has come to represent a lever for change and a guiding voice on issues we face in Diné Bikéyah.

One Diné asked on Facebook why Bearsun is such a big deal. A reply read, “Because Navajos like things that are different.”

The pandemic last year upended our lives and maybe we’re just missing our Navajo fairs and tired of staying home and not gathering like we used to. Bearsun might be worth the local hype.

Bearsun is fascinating for sure, and online updates and whistle stops keep those interested in suspense.

The shash yáázh daane’į́h is human interest, and many of our people, including our elders, have made sense of it and worked Bearsun into art and songs.

Why? Bearsun isn’t superlative in any way. He’s no Batman or Spider-Man, both of which – like Larios – must put on costumes to become heroic.

And he doesn’t want to reveal his true identity.

Another man, Aleczander Goldsberry, also walked across our homeland around the time Larios was in Leupp, Arizona.

Goldsberry is also walking across the country, from Florida to Alaska, and happened to be in Western Navajo when he met with Mike Sixkiller, the manager for the Western Navajo Fair, outside Bashas’.

Sixkiller said Goldsberry is “cool and all.”

Still, he wished Larios in his Bearsun suit visited Tónaneesdizí, where there would have been a parade down Main Street, DJs stationed along the roadway, and people in bear costumes dancing for Bearsun as he entered the community.

“This town would flip,” Sixkiller said. “Tuba City has to be taking things to another level! We don’t know how to be average! But it would be insane!”

Bearsun is compelling, propelled by a cornucopia of selfies and posts on social media.

Was Larios bored? Was he going through some personal issues that led to Bearsun? Did he do it for validation from others?

It’s an enigma that many of us might never truly understand why Larios decided to create Bearsun and walk across the country as a honey-and-cream-colored character with a bobble tail.

“Also right now: The Navajo Nation and Navajo people are also rejecting their own, offering physical abuse, verbal abuse, belittlement, no shelter, no water, no food, insults, and hatred.”

Prayers might not be enough. We must work to find solutions and advance social justice issues in our communities. By coming together with a response, we will meet the magnitude of the challenges we face.Why can’t we extend ourselves for one another just as we did for Bearsun with patience and kindness? Perhaps if we show humility, respect, and selflessness toward one another, toward all living things, and toward our land, our land would flourish and we would be better people.

Instead, we show these qualities only when a non-Native visitor comes through and we sometimes shower them with gifts, including dootł’izhii and a Pendleton blanket, and a tour of our capital.

As Larios in his Bearsun suit left Tsébigháhoodzání on Sunday morning after taking a personal day off, the Bearsun mania will march on for months to come.