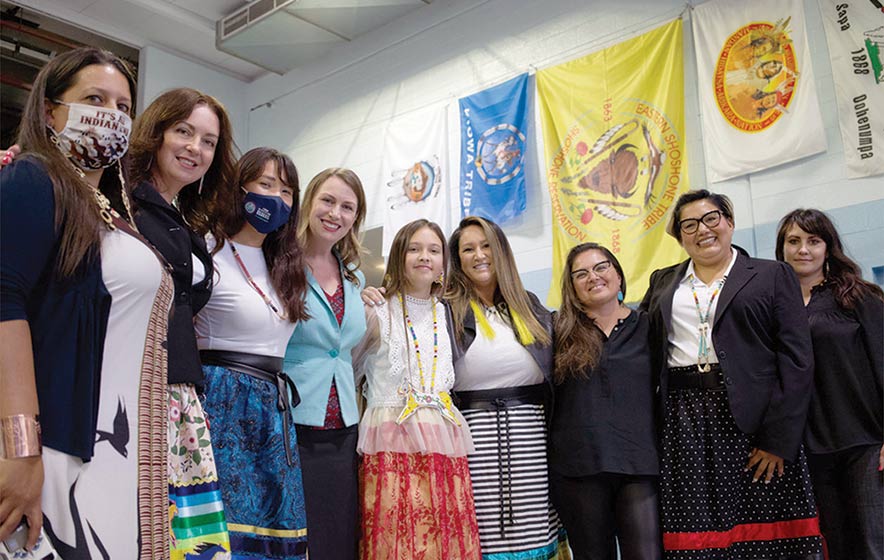 Special to the Times | Rachel Todea
Colorado State Sen. Suzanne Danielson, D-Aurora, fourth from left, from stands with Native women at the Denver Indian Center when a bill prohibiting Native-themed mascots at public schools was signed into law by Gov. Jared Polis.

By Rachelle Todea
Special to the Times

Try, try and try again. Two failed attempts did not stop a coalition that successfully advocated against the use of Native American mascots in Colorado’s public schools.

In 2010, former Colorado Sen. Suzanne Williams, D-Aurora, introduced a bill then withdrew it.

In 2015, former Rep. Joseph Salazar, D-Adams, sponsored a bill, which passed the House but not the Senate.

Finally, Sen. Jessie Danielson, D-Jefferson, sponsored a bill similar to the 2015 bill and it passed.

“It’s always been something I believed in,” Danielson said.

In late 2015, former Gov. John Hickenlooper, now a U.S. senator, created a task force through an executive order to start a dialogue about high school mascots.

Ernest House Jr., a member of the Ute Mountain Ute Tribe and the former executive director of the Colorado Commission on Indian Affairs, led the task force.

Part of the work included identifying tribes with historical ties to Colorado. To date, 48 tribes were identified.

Several bills related to Native Americans were also signed. House’s work laid the groundwork for two of the bills, one of which provides in-state tuition for members of Native American tribes with historic ties to Colorado such as the Navajo Nation.

After observing both a Major League Baseball and a National Football League team change or stop using Native-themed mascots, Danielson believed it was time.

She brought forward a coalition to do it the right way. Actions were laid out and input gained.

MacLachlan represents District 59 in southwestern Colorado and is also chair of the Education Committee for the Colorado Legislature.

Benavidez maintains ties with the Denver Indian community. Her ancestors are Indigenous.

“Of course, I would do it,” Benavidez said. “As a Chicana I feel for and understand my Indigenous roots and I support this bill.”

Benavidez described what proponents to end racial mascots faced in Lamar, Colorado, a small town of about 10,000 people, due to its mascot, the Savages.

Lamar is the nearest town to the historic site of the Sand Creek Massacre. Former U.S Sen. Ben Nighthorse Campbell of Colorado sponsored a bill in 1998 that established it as a National Historic Site.

He also introduced a bill in 1993 against the use of the National Football League’s Washington team mascot, and he opposed the Lamar High School mascot.

The NFL Washington team changed its name and mascot in 2020. The Cleveland Indians recently announced plans to change its mascot. Lamar High will keep its mascot until May 31, 2022.

Benavidez said recommendations were made to former Gov. Hickenlooper by his task force, but no actions were taken.

Special to the Times | Rachel Todea
Northern Arapaho Chairman Jordan Dresser speaks at the Denver Indian Center June 28 about the signing of bills giving in-state tuition to students from tribes with ties to Colorado and prohibiting Native-themed mascots for public schools. Colorado Gov. Jared Polis is seated at right.

A new stakeholder group of many organizations, tribes and community members supported the new drive.

Monycka Snowbird of Colorado Springs, who is Ojibwe, has been campaigning against Native American mascots for decades. She explained that Cheyenne Mountain High School held the last race-based mascot, the Indians, in the area.

Early this year, the Cheyenne Mountain school board voted 4-1 to change its mascot to Red-Tail Hawks.

Snowbird believes the momentum of the bill led to the district’s vote. She also works in bringing attention to Missing and Murdered Indigenous Women and is concerned about the dehumanization of Indigenous people.

“It begins with mascots,” Snowbird said.

Jennifer Spires, Choctaw of Oklahoma, of Denver, has worked for 20 years against Native American mascots since she was in 6th grade. Her mom also worked on the issue.

Spires believes that Indigenous issues are pushed back. She shared dates to provide testimony with her large network. She also shared testimony.

“I felt like I had to do something,” Spires said.

Benavidez stated that Republican opponents said that nobody uses mascots to belittle anyone but instead to honor them.

Republicans did not support the bill as evident by the voting record, Benavidez said.

According to the Montrose Press, Sen. Don Coram, R-Montrose, said, “I am a Montrose Indian graduate and support the name because in our community it is used as honor and respect.”

He remarked that the conversation about mascots was never mentioned when he visited his legislative district in southwestern Colorado, according to the Montrose Press.

“This is not honorable,” Danielson said. She reiterated that Native Americans have been saying what is best for them.

Dallin Maybee, Northern Arapaho/Seneca, provided a testimony in response to claims that mascots mean honor. He is strongly against stereotypes.

“Women have taken this over the finish line,” said Darius Lee Smith, Diné/Black, the executive director for the Denver Anti-Discrimination Office and staff liaison to the American Indian and African American Commissions for Human Rights and Community Partnerships.

He witnessed the historic signing of the bill.

“Women led this,” he said. “That’s what we need in Indian Country.”

The mascot change has been 30 years in the making, Smith explained.

Polis signed the historic bill at the Denver Indian Center.

Chairmen from the Southern Ute Tribe, the Ute Mountain Ute Tribe, and the Northern Arapaho Tribe were among several tribal organizations and residents who witnessed the signing of the bill.

“This bill is about dignity,” Polis said. “It’s long past time that we ensure that our public schools or institutions of public education are welcoming places to learn and grow for every Coloradan including Coloradans with American Indian heritage.”

Polis said the bill will correct past wrongs and make sure they will not be perpetrated on another generation of Native youth.

The law allows exceptions for schools that already entered an agreement with a tribe or will work with tribes, and for public schools in tribal jurisdictions.

Manuel Heart, chairman of the Ute Mountain Ute, said, “Due to this bill signing, it puts our tribal nation’s voice with a seat at the table and each one of you that testified you put yourself in that seat and said I want a voice on this bill. Thank you to each and every one of you that did that.”

Southern Ute Tribe Chairman Melvin Baker said, “For some people it’s OK to use those derogatory names. But for us, it is not. I think everyone coming together to make it happen is a big step for the Native community in the state of Colorado.”

Northern Arapaho Tribe Chairman Jordan Dresser said, “Getting rid of derogatory and harmful mascots will be a big win for Native American youth and their self-esteem.

He also said in-state tuition will benefit the youth.

“This is a big, historic day,” Dresser said. “I want to thank every single one of you for making this possible.”

Danielson was honored with a blanket wrapping.

“It has been 100 percent my privilege to work on this bill,” she said.