Reporter’s notebook: A study of two deaths — one family’s experience with assisted suicide

As expected, the medically assisted suicide bill recently passed by the New Mexico State Senate has aroused a lot of controversy.

Those who oppose it, including the Diné Hataalii Association, say it violates traditional or religious concepts of death and could be used to pressure people to end their lives.

Proponents argue it is a way for the terminally ill to die with dignity and avoid months of pain and suffering.

For those who are on the fence, I thought I’d offer my family’s recent experience with Colorado’s assisted suicide law, which is pretty much identical to the one New Mexico is grappling with.

Both my parents died last year within four months of each other. My father, who had terminal cancer but all his faculties, opted for assisted suicide.

My mother, who had advanced dementia, did not have that option, as you have to be in your right mind to request it.

My father’s passing was about as good as a death can be. My mother’s death I wouldn’t wish on my worst enemy. 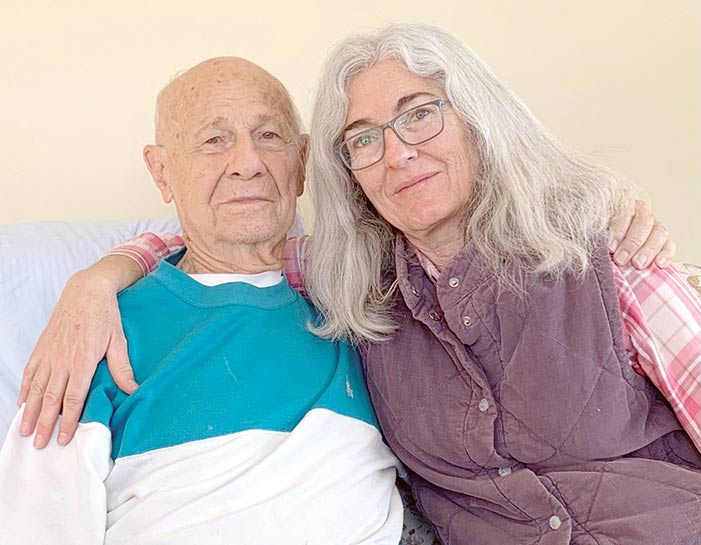 Courtesy photo
My father and I on his last day.

My parents had both been in great health into their late eighties and early 90s, when things took a fairly sudden turn for the worse. My mother’s recent memory started to shrink. At first she couldn’t remember what happened yesterday, then last week. Toward the end, she had only early childhood memories.

Meanwhile, my father, her main caregiver, was diagnosed with prostate cancer that had metastasized to his entire body. He could no longer lift my mother into bed or onto the toilet, and refused to put her in a nursing home. I moved to Colorado, where they live, to take care of them.

If someone were to design an ironic hell for my formerly athletic, competent parents, they could not have done a better job. My father was as sharp as ever, but could barely hobble around the apartment with a walker. My mother’s body was still usable, but her brain was gone.

Between them, they were a whole person. But they were driving each other nuts, and I was in the middle.

Every morning it was the same routine. My mom would wake up thinking she was in a motel. She would say, “This is a nice room, but I want to go home.”

My dad would spend the next 10 minutes futilely trying to convince her she was at home.

“We’ve lived in this apartment for four years,” he would say. “Don’t you remember, Esther?”

After making breakfast, which they barely touched, we would sit at the kitchen table.

My dad would read the paper and work the crossword. Mom would read the same few sentences of the front page story over and over, aloud. When she got bored she would recycle the same three or four stories from her early childhood, or comment on what a nice view this motel had.

Then they would go for a slow walk down the hall of their building, and I would make them some lunch that they wouldn’t eat. They would sit outside on their balcony for a while if it was nice.

Then we would watch the news, I would cajole them to eat a few bites of dinner and try to get them to drink an Ensure. We would watch a Turner Movie Classic and go to bed.

Eventually we convinced my dad to hire someone better trained to come in and help them and I went back to Arizona. My sisters visited daily. On the weekends, when the helpers were off, my sisters and I took turns staying with them.

By the time my mother died, she had forgotten how to stand up and how to use the toilet. A stunning woman in her youth, she had enjoyed putting together nice outfits into her eighties. For the last few months of her life, she wore whatever we could slip over her head, and a diaper.

We would brush her hair and pull it back into a neat ponytail, but she would catch a glimpse of herself in the mirror and cry. In her more lucid moments, she would say, “I’m so confused. I don’t know what’s going on. I wish I could just be done.”

Eventually she stopped talking. She just sat in her wheelchair and looked into space.

The hospice nurse suggested taking her off all her medications and allowing things to take their course. She predicted that my mom, without her heart pills and diabetes medication, would last three days to a week. She lingered six weeks, not dead but not really alive either.

It was horrible for my dad, watching his vivacious partner of 64 years turn into a zombie. I think she remembered who he was, but she didn’t want to be touched or held. Nevertheless, he never left her side.

My sisters were with her when she finally passed, but it was hard to tell if she knew they were there.

At the time I left, on Christmas of 2019, my father had been given six months to live. He kept saying he wanted to live long enough to take care of my mother and settle his affairs, but after that he would like to pass.

At first we argued with him, especially one sister, but he was so firm in his resolve that in the end there was nothing to do but support him in his decision as best we could.

There was no doubt he was dying. He was getting weaker and weaker, but refused to use a wheelchair and hobbled across the street to the grocery store every other day even though my sisters were always bringing over groceries.

After Mom passed in early September, we thought maybe he would feel a sense of relief. But without the full-time burden of caring for her, his life seemed directionless. He kept to his routine of working the crossword and watching Turner Movie Classics, but there was no joy in anything he did.

My sisters and the grandkids made sure to visit every day, cook and clean and take him out for a drive. We tried to interest him in online chat groups, volunteering online for a school science class or writing a memoir, even fostering a rez dog. But he was done.

In October, he asked us to help him arrange an assisted suicide. My sister found a group in nearby Longmont that could help, but they informed us he could go through his Medigap insurance company.

We would have to find two doctors to confirm he was terminal (which wasn’t hard; every doctor who examined him was amazed he had made it this long), then a doctor would prescribe the medication, and he could take it whenever he wanted to, or not.

Once my dad had the medication, he perked up quite a bit. Just knowing it was in the fridge and he had a way out gave him joy. He cheerfully started planning his last few months.

We decided that, COVID be damned, we would get together in person for Christmas and he could share whatever stories and advice he felt still needed to be shared.

On New Year’s Day, 2021, he would take the medicine, drift into sleep, and not wake up.

We had a lovely Christmas together. Ironically, as my brother-in-law observed, it was one of the best ever, because instead of playing board games or the kids all sitting around absorbed by their cell phones, everyone was focused on Dad and each other.

Eventually he gathered us around and told us the story of his life, including some surprising details none of us had heard before. He told us to focus on relationships, because in the end, that’s all you have.

The next day, as my husband and I were driving back to Chinle, my sister texted to tell me Dad had decided he was ready. He felt like he was going out on a high note and didn’t feel the need to tough it out another week.

Although he was a lifelong agnostic, he missed Mom terribly and was willing to take the chance that she would be waiting for him on the other side.

I asked if my sister if should we should turn around and come back, but she said it would be over by the time we made it back to Boulder. Throughout the rest of the ride, my husband drove and I kept in touch with my sisters by text.

My sisters would stay with him, and since one of them is a physician, she could confirm the time of death and fill out the certificate. As they told it, he told them he loved them, took the medicine and lay down. He fell asleep after a few minutes, and a little over an hour later, simply stopped breathing, his daughters by his side. It was all very peaceful.

To the end, my father was in control of his life. He was fortunate to be in a state that offered the option of planning his exit.

My mother, sadly, did not have that choice. I know she wouldn’t have wanted to go out the way she did, little by little until nothing of her was left. Maybe some day people will be able to leave an advance directive for assisted death in the case of chronic dementia; in some other countries, they already do.

I guess I would say that assisted suicide is not for everyone, but everyone should have that choice. The states that have passed it have not experienced it being misused. As pro-choice advocates say about abortion, if you don’t like it, don’t have one. But who has the right to make that decision for somebody else?

Ultimately, our lives are our own, or should be. I hope that when my time comes, my death is like my father’s: peaceful and with dignity.