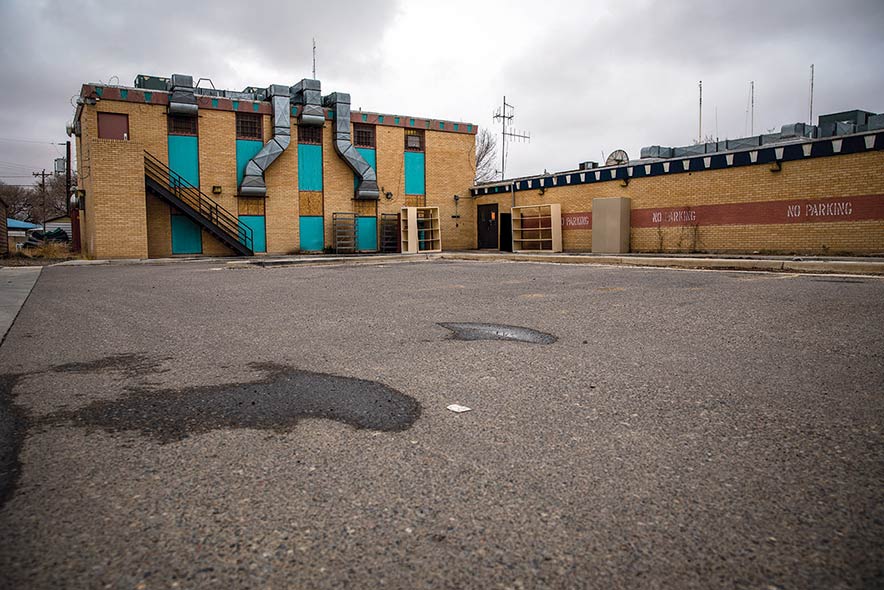 The closure was a long time coming because of its woeful state, Corrections Director Delores Greyeyes said.

The department has been unable to obtain a sanitation permit for the kitchen. The Navajo Nation Department of Public Safety has been cited numerous of times, starting in 2008, for mold in the boiler room, cracks in the walls and floors, continuous heating, ventilation and cooling problems, rusty plumbing and more.

“The Shiprock detention facility has been operating as a temporary facility for the past several years due to the extensive structural problems,” said Greyeyes.

“This facility is more than 55 years old and basically is beyond repair as the walls, the plumbing systems, the heating, ventilation systems cannot be addressed with repairs,” she said. “NDOC has been working on planning for a new facility for the past three years and is at schematic design stage.”

It’s widely known that buildings such as Shiprock’s corrections and police station, along with the Window Rock police headquarters and corrections facility, pose a hazard to inmates and employees because of mold, asbestos and structural problems.

The Shiprock District moved out of the police station and into the old Shiprock Post Office months ago. Window Rock Headquarters has been looking for a new home as well, but continually meets with roadblocks such as no funding and no buildings available. Efforts to build a new facility never seem to gel.

“NDOC has made numerous contacts the BIA Office of Justice Services and the BIA Department of Risk Management and Construction to assist with the planning,” Greyeyes said.

“Limited response has been received in becoming involved in planning for a new facility,” she said. “There is not a thing that could have been done to keep this facility open due to age, deterioration and other building issues. This building is a health hazard to Navajo Nation personnel, visitors and inmates.”

NDOC and the division director are waiting for a call with BIA/OJS to discuss the temporary holding of new arrestees in the Shiprock area while all the sentenced inmates will be transported to the new Kayenta or Crownpoint jail.

“Public safety facilities in Shiprock and Window Rock continue to be a problem,” said Chief of Police Phillip Francisco. “Department of Corrections suddenly decided to vacate the building, which required police officers to transport their arrestees to Crownpoint, which adds time to the calls, and severely affects our ability to respond to calls for services.”

The Shiprock jail was converted to a temporary facility by consent decree in November 1992. This facility was used for individuals up to 72 hours.

As the building deteriorated, occupancy was further restricted to 8 to 12 hours. The facility could house six males and six females, said Greyeyes.

“At the time of closure there was only one individual being housed while waiting to be transported out to the Crownpoint corrections facility,” said Greyeyes. “The Shiprock facility was used only to house the individual temporarily pending transport to other locations and/or release after the 8 to 12 hour holding.”

Another issue with the jail closing is the recent partial reopening of Northern Edge Casino, which is expected to generate more alcohol-related calls.

The nearly two-hour drive to transport arrestees to Crownpoint will considerably impair the Shiprock officers’ ability to respond to local complaints, Francisco said.

“At a minimum an extra hour and a half to two hours for every arrest they make … it extends a normal arrest call from three to seven hours,” said Francisco.

Although police and corrections are separate from one another, most of the burden is placed on police to figure out what to do at a time like this.

According to a recent memo, since the closure officers are reluctant to make an arrest for minor offenses, and when they make an arrest they generally release the offender on public recognizance, or take them to a family member.

“The closure of the Shiprock Detention Center has put extra burden on the shifts with regard to manpower on the road,” said one officer in the memo. “We are spending more time doing medical clearances, transport to relays, or even transport all the way to the detention facilities in another district. This put more strain on the shift to handle calls of service.”

Francisco said with no plan currently in place to address the closure, it’s been up to the police department to make seek solutions, including trying to seek funds to establish a temporary holding cell, hire a temporary transport officer, as well as finding funds to buy a transport vehicle.