Trumpian vision doesn’t include Indigenous people; vote for one that does 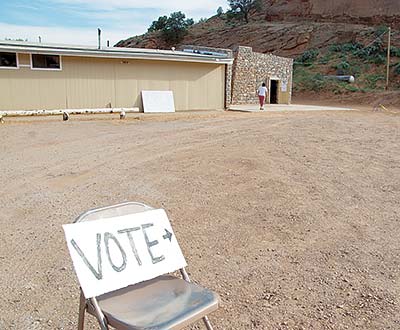 Editor’s note: This is submitted by Ethel Branch in her personal capacity and is not a reflection of the views of Yee Ha’ólníi Doo or Kanji & Katzen.

Monday was Indigenous Peoples’ Day and while it was so incredible to see all the outpouring of love, celebration, and joy from my fellow Indigenous peoples and Americans in general, there was one conspicuous holdout: the president of the United States, Donald J. Trump.

Not only did he not celebrate Indigenous Peoples’ Day, he issued a formal presidential proclamation the Friday prior designating our special day as Columbus Day and painting supporters of Indigenous’ Peoples Day as “radical activists” seeking to “undermine Christopher Columbus’s legacy.”

He also accused those who support and celebrate Indigenous Peoples’ Day as individuals “who spread hate and division.”

These types of accusations are poorly placed. Indeed, the reverse is true.

What Trump vilifies as “revisionist history” in his rant-style proclamation is nothing more than truth telling. It is the correcting of a false narrative that has itself spread hate and division in our country.
Worse yet, this false narrative, much like the false narrative of Manifest Destiny, has sought to—at its worst—erase Indigenous peoples from this continent, and from the fabric of American history altogether.

At its best, this false narrative has sought to oppress Indigenous peoples by keeping the “American dream” and the fruits of democracy out of reach for our people.

The “patriotism” that Donald Trump promotes is a thinly veiled doctrine of white supremacy that preserves the riches of America for a select few American citizens. That is, those of the white, Anglo-Saxon, Protestant (aka “WASP”) variety.

If we as Diné people want America and its riches to be accessible to our family members and our community, or to any non-white individuals, it is imperative that we show our firm and forceful rejection of Trump’s limited vision of America—and who is truly American—by voting him out of office. 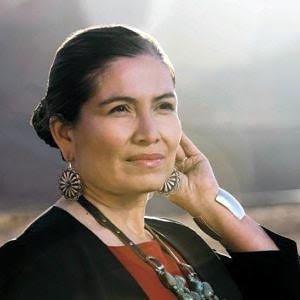 America is for all of us, not just white Americans. Indeed, without Indigenous peoples there would be no concept of democracy and equality, no vast territory, no Code Talkers (we would all be speaking German or Japanese right now) and no depth to the ranks of the U.S. military where our people serve in disproportionate numbers.

We need to take ownership of what is rightfully ours and vote this dangerous and hate-fomenting individual out of the office he was never qualified or suited for anyway.

Lest you have that stain on your conscience, I ask that you register to vote if you have not already (the Arizona voter registration has been extended until Oct. 23 and Utah’s deadline is also Oct. 23).
I also ask that you exercise your right to vote as early as possible. Early in-person voting is, in my view, the safest and most secure way to make sure your vote counts, and this year there are even more sites available on the Nation than in the past.

The second-best way to vote early is by dropping your mail-in ballot into a secure ballot drop box. There are also more of these sites available on the Nation this year.

I would not trust the postal system that Trump has pillaged, and that has never served our people well anyway. For example, if you drop your ballot in the mail in Window Rock, it could take 10 days (when the postal service was functional) for your ballot to travel to the county recorder’s office in St. Johns (which is a 1.5-hour drive from Window Rock) because your ballot would first travel out-of-state to Gallup, then Albuquerque, then to Phoenix, and finally, to St. Johns.

If you choose to risk the vortex of Trump’s enshambled postal service, then be sure to call the recorder’s office religiously until you receive confirmation they have received your ballot and that all is well with your ballot.

You might be able to “cure” these deficiencies, but that will require you to drive to the county recorder’s office to do so. Much better to just vote early in-person and have the confidence that your vote will count, and that you will have done your part to protect democracy and the accessibility of the American dream for all Americans, including your fellow Indigenous people.
Now is not the time to wallow in disillusion or malcontent over the failure of federal elected leaders to meet the needs of our community.

Trump is a clear and present danger to Indigenous people because not only will he continue to ignore our needs, but he will actively seek to undo any progress that has benefited or enriched our people and our community—much like his rejection of Indigenous Peoples’ Day and his uplifting of Chistopher Columbus and his murderous and land-thieving legacy.

Ethel Branch is the founder and interim executive director of Yee Ha’ólníi Doo, dba Navajo & Hopi Families COVID-19 Relief Fund. She is on a leave of absence as a member of the law firm of Kanji & Katzen, which represents Indigenous nations in litigation and sovereign-to-sovereign negotiations. She is an enrolled Navajo tribal member and previously served as the 11th Navajo Nation attorney general. She is a graduate of Harvard Law School, Harvard Kennedy School, and Harvard College. She lives and works in Kinlani.