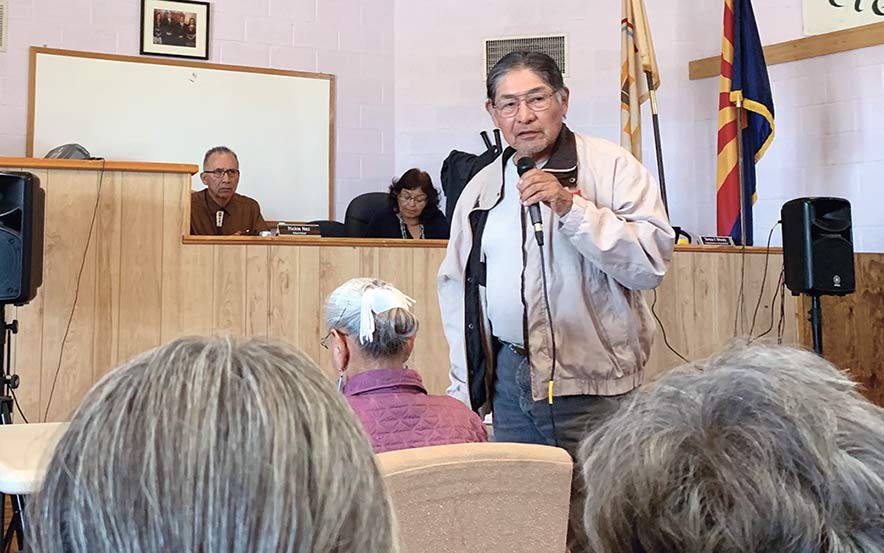 After hearing a litany of complaints on the way the grazing permits are being reissued on the Navajo Partitioned Land, the Navajo Nation Council’s Resources and Development Committee indicated they’re willing to revisit the issue.

Meeting in the heart of Dzil Yizhiin (Black Mesa area), the RDC listened to a two-hour-long presentation from local ranchers and chapter officials and agreed to set a public hearing on the matter.

The ranchers complained that the regulations — developed over the last three years by the Bureau of Indian Affairs in conjunction with a committee of the grazing representatives of the 14 affected chapters — were too draconian, or in the words of Piñon Chapter President Bessie Allen, “ridiculous.”

Among their problems with the new rules are difficulty in establishing heirship because of lack of documentation in most Diné households; the reduction in the number of permits from 1,150 in 1973 to about 50; and the lack of funding or training to rehabilitate the range.

But at the heart of the dispute is the determination by the BIA that each grazing permit will start with just 10 sheep units. The determination was made after a 2016 BIA forage study showed most areas of the NPL were barely able to support grazing.

“I cried when this was told to me,” said Allen. “Are you trying to move us and make us into bilagáanas, or what?”

Although grazing permits on the NPL were suspended in 1973 as part of the settlement of the Navajo-Hopi land dispute, many people continued grazing animals on the land. Allen estimated most people in Dzil Yizhiin have 50 to 60 sheep, goats and cattle. To ask them to reduce their herds that drastically is “ridiculous,” she said.

Former Hard Rock Chapter president Percy Deal pointed out the cultural importance of sheep, noting the many songs about them.

The plan to reissue the permits doesn’t even mention fundamental law, he said.

He added that the NPL chapters had put together a $4.5 million drought plan that was supported by chapter resolutions but never went anywhere in Council. They also asked the U.S. Bureau of Reclamation for $536,250 for technical assistance to help with land reclamation.

Deal noted the 34,000 acre-feet of water the Navajo Generating Station was using and wondered if that could be put to use by ranchers now that the NGS is closing.

Rancher Dorothy Yazzie of Black Mesa wondered how the livestock reduction would be enforced.

“Who’s going to go out there and collect all our animals?” she asked.

Daisy Kiyaani of Black Mesa opined that if the ranchers are to give up their animals, they need something in return.

“We want technical assistance, management practices, training,” she said. “As a classroom teacher, I have to show the kids how to do something for them to learn it. You need to do that for us.”

“We asked for drought insurance for this area, but the money has not come to us,” stated Forest Lake Chapter President Fern Benally after the meeting, adding that she is worried about the elders in her chapter.

“Their children have all left,” she said. “Sheep and cows are who they talk to. They look to them as motivation to enjoy another day of their lives. The coal mines are gone now. The people who live on those lands want to use it for grazing, maybe pass it on to their descendants.”

Benally also wants some grazing permits reserved for young people who haven’t inherited a permit from their parents.

“The younger people want an opportunity too,” she said. “I’ve met some who want to come home and start raising livestock.”

The committee’s legislative adivisor, Shammie Begay, noted that the entire RDC is new this year and it wouldn’t be a bad idea to hold a work session to background themselves more on this issue.

RDC Chairman Rickie Nez said the matter is on the agenda for the committee’s Oct. 16 meeting, and the committee will try to schedule a public hearing then.

Yazzie was pleased with the meeting.

But not everybody agreed the rules should be relaxed, particularly those who have already taken the painful steps to comply with the new rules.

“They’re already re-issuing the permits,” said Francis Lester, grazing committee representative for White Cone Chapter. “I don’t think the BIA will want to go backwards now that the train has left the station.”

Amos Johnson, the BIA’s natural resource specialist for the NPL, declined to comment on the record, other than to confirm that three NPL grazing permits have already been reissued.

Lester also emphasized that the new rules say that, although everybody has to start with 10 sheep, the herds can be built up every year as the land recovers.

“How are people going to run 50 sheep on this land?” he asked. “What are they going to feed them?”