Allegations against Nez include use of plane, P-card purchases

Allegations have been filed against Vice President Jonathan Nez claiming that he used his official purchase card to take his family and staff assistants on a vacation to Disney World and used more than $600,000 in tribal travel funds in his campaign for president. 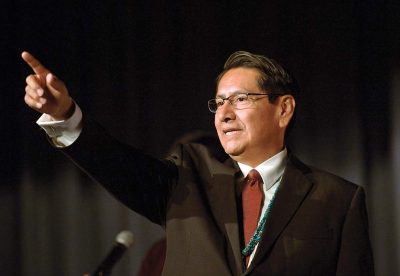 The allegations were filed on Sept. 14 with the Ethics and Rules Office by Frances Lester, who stated on the ethics office intake form that he lives in Indian Wells, Arizona, and is a member of White Cone Chapter.

There had been reports for several weeks that accusations were coming but no one knew until they were filed who was bringing it and how detailed they would be.

Stacy Allison, director of the ethics office, said Tuesday that intake forms are supposed to be confidential.

“It says so on the form itself,” she said.

The form states that whoever files it cannot make a copy and is prohibited from disclosing its contents to anyone else. A copy of the form was e-mailed to the Navajo Times by someone other than Lester.

Allison’s office has a strict policy of keeping these kinds of matters outside the public arena until they are thoroughly investigated and a decision has been made to whether to refer the matter to the Office of Hearings and Appeals for adjudication.

Attempts to contact Lester Tuesday and Wednesday were unsuccessful but according to the form, if contacted he would not be allowed to comment.