The family of Edward T. Begay, former vice chairman, speaker of the Council and delegate for Church Rock, announced that he had died Sunday in Albuquerque. At the time of death, he was surrounded by family. 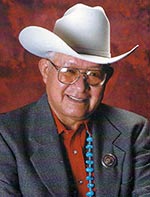 The family said in a statement, “Ed T. was a loving husband, caring father and gracious grandfather, but to many he was Cheii.

“We will miss him at our dinner table, sitting next to us in church, and listening to his stories of the journeys his life has taken him on,” the family said. “We are extremely proud of his service to the Navajo Nation, the state of New Mexico, and his tribal home communities.”

Services are planned for next week and the family asked for respect as they grieve but appreciate expressions of sympathy.

Gov. Michelle Lujan Grisham issued the following statement on Sunday: ” I am grateful to Mr. Begay for his life of service to both the Navajo Nation and the state of New Mexico, and my prayers are with his family and loved ones.”

The governor ordered a police escort for his body and family from Albuquerque to Gallup.

He was a true statesman who devoted his life to the Navajo people, his family said in a statement.

He grew up in the Nose Rock area of what is now called “Superman Canyon” just northeast of Gallup.

He served I the U.S. Army in 1958 and was stationed in Fort Jackson, South Carolina. He then directed the Navajo Tribe’s Data Processing Department for nearly 10 years.

In 1961, he married his high school sweetheart Cecilia M. Damon and they had two daughters, Sharlene Begay-Platero and Sandra Begay, and a son-in-law, John Platero Jr.

He served as president of Church Rock Chapter from 1968 to 1970 then was elected to the Navajo Tribal Council. From 1971 to 1983, he represented Church Rock and Breadsprings on Council.

In 1982, he successfully campaigned with Peterson Zah to serve as vice chairman in the Zah-Begay administration. They served from 1983 to 1987.

He worked closely with Zah and the Navajo Tribal Council to renegotiate mineral, coal, oil, and gas leases with major energy companies to pay a fair price for resources for the benefit the Navajo people. He helped to create the Permanent Trust Fund, now valued at several billion dollars, that continue to provide a source of income for future generations.

In 1999, he was elected speaker of the Council and served two terms. He directed his staff to research the Diné origin of Navajo customary law, resulting in Council passage of the Fundamental Laws of Diné on Nov. 1, 2002.

Ed T. Begay also played key roles in gaming agreements with New Mexico and Arizona, legislative redistricting, the United Nations’ Declaration on the Rights of Indigenous Peoples, the Local Governing Act Trust Fund, and many others.

The family said, Ed T. Begay enjoyed reading his Bible, was fluent in Navajo and English and wore a western hat that became his trademark.

“He enjoyed visiting with family and friends and always gave a warm smile to everyone,” the family said. “He left behind a great legacy for the Navajo people.”

WINDOW ROCK – On Monday, based on the number of cases from May 27 to June 9, the Navajo Department of Health issued a health advisory notice to 40 of the 110 chapters warning of the uncontrolled spread of the coronavirus, the president’s office reports.

LEUPP, Ariz. – First lady Phefelia Nez co-hosted the “Nihik’is: A Collaborative Animal Summit” on June 7 and 8 at Twin Arrows Casino for organizations to develop a coordinated response to animal welfare on the Navajo Nation, the president’s office reports.

The Best Friends Animal Society co-founder and board chairman Francis Battista, who has the largest U.S. sanctuary for homeless animals in Kanab, Utah, emphasized the “no-kill” philosophy against euthanizing homeless animals.

He said a common goal with the Navajo Nation is to increase the 21% save rate of animals at the Nation’s four animal shelters.

Navajo Nation Fish and Wildlife Director Gloria Tom and the animal control officers said support for the Navajo Veterinarian Program and the need to expand animal shelters and spay and neuter clinics are needed.

According to Kevin Gleason, a wildlife law enforcement manager, officers collect an average of 135 animals a week.

Rudy Shebala, executive director of the Division of Natural Resources, said, “We acknowledge that nonprofit organizations have assisted the Navajo Nation in improving animal wellness for many years. We have an overwhelming number of animals without homes in the Nation, which continues to threaten communities’ safety.”

Nez said, “This was the first time all organizations were in the same room together to have productive discussions. We all have a shared vision to make our communities safer through animal stewardship.

ALBUQUERQUE — Deb Haaland, secretary of Interior, on June 10 celebrated the launch of the Indian Youth Service Corps and unveiled the program’s guidelines, according to an Interior news release.

The corps is a new partnership-based program that will provide education, employment and training for Indigenous youth.

Youth will engage in conservation projects on public and tribal lands and Hawaiian homelands – putting young people on a path to good-paying jobs while working to tackle the climate crisis.

Haaland said, “In addition to completing much-need conservation projects that will enhance landscapes and ecosystems on tribal and public lands, the Indian Youth Service Corps will have considerable focus on vocational skills training, economic empowerment and career development for Indigenous youth.”

The National Park Foundation also announced a commitment to fund $1 million in IYSC projects, in addition to its ongoing support of tribal youth service corps projects.

NPF is currently funding more than 10 projects from Maine to New Mexico that engage tribal youth.

The IYSC guidelines provide a framework for tribal and partner organizations’ participation in the program.

Goals of the program include creating awareness of Indigenous culture and history, and conserving and protecting their landscapes, stories and shared experiences for current and future generations. The program guidelines were established in consultation with tribes, the Bureau of Indian Affairs and other stakeholders.

This year, Interior is providing $2 million to the BIA, $700,000 to the National Park Service and $600,000 to the Bureau of Reclamation to establish the youth corps.

Through a Navajo-Hopi Land Commission resolution, approximately $3.7 million was drawn down from the Bureau of Indian Affairs for nine chapters within the Former Bennett Freeze Area. The funds resulted from fees and other revenue collected from the area by the BIA after the freeze was imposed in 1966.

In 2008, a compact was signed to allow the freeze on development to be lifted.

The new/updated MOU, signed by President Jonathan Nez, with Leupp marks the first of four LGA certified chapters in the area to receive technical support to assess, plan, budget and begin construction and repairs of homes.

The other three chapters are Tonalea, Bodaway/Gap and Tó Nanees Dizi.

As of June 6, Leupp Chapter began assessing 10 eligible homes with the assistance of a certified licensed contractor in collaboration with CHOICE Humanitarian technical staff.

WINDOW ROCK – On Thursday, June 9, the Naabik’íyáti’ Committee approved a bill to establish the San Juan River Mitigation Fund for litigation and settlement funds from the Gold King Mine spill, the speaker’s office reports.

In 2015, the Gold King Mine located near Silverton, Colo., released three million gallons of toxic wastewater into the Animas River, which flows into the San Juan River. This impacted Navajo farmers and ranchers who live and work downstream.

Speaker Seth Damon said, “Over seven years have passed since the disastrous spill, yet the Navajo Nation and its people are still facing the repercussions from it.”

Delegate Eugenia Charles-Newton said, “This litigation fund can be used to hire the best attorneys who will fight for what the Navajo Nation deserves.”

With a vote of 17 to 1, the bill moves on to the Navajo Nation Council.

Stewart said, “As a former Fort Defiance Chapter president, I wanted our community to remember an individual that played a vital role in both our community and the wider Navajo Nation.

“We decided to memorialize Mr. Price for his lifelong work such as being the first medicine man to dedicate the original Fort Defiance Hospital in 1938,” he said.

In contrast, from 1863 to 1868 Col. Christopher “Kit” Carson led a brutal military campaign against the Navajo that resulted in many forced on the 300-mile march to Bosque Redondo, known as the “Long Walk.”

Delegate Mark Freeland said, “The atrocities our people suffered at the hands of Kit Carson are significant, yet we, as a nation, have remained strong.

“Embodying that strength is Pete Price, who preserved the ceremonies that define us as Diné,” he said.

Born in 1868, Pete Price was a respected medicine man and spiritual leader known for his knowledge of many complex Navajo ceremonies.