Fleming Begaye Sr., one of only eight remaining Navajo Code Talkers, died in Chinle Friday. He was 97 years old. 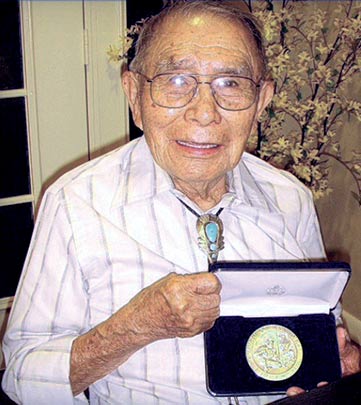 Active up way up into his 90s, word of his death was covered in newspapers across the country, including USA Today, the New York Post, and the New York Times. More than 60 notices of his death were posted on the Internet by Monday as not only Navajo tribal members but people throughout the country mourned his passing given the number of remaining members of this elite Marine group and their value to this country for their efforts during World War II.

One of his last public appearances occurred on Nov. 17, 2017 when he, Navajo Code Talkers Association President Peter MacDonald and others, traveled to Washington, D.C. to make a personal appeal to U.S. President Donald Trump for funding to help build a Code Talker Museum just east of Tse Bonito.

The visit attracted nationwide attention, not because of their cause, but during the meeting, which was covered by the press, Trump used the occasion to make fun of one of his political opponents, Elizabeth Warren, by calling her by the nickname he gave her, “Pocahontas.”

Begaye served in the U.S. Marine Corps from 1943 to 1945, using his skills as a Code Talker in the battles at Tarawa and Titian. He also spent a year in a military hospital recovering from wounds he received during the Battle at Tinian.

His military story is one of the most daunting of all of the Code Talkers.

During the Battle of Tarawa, MacDonald said, his landing vessel was destroyed, forcing him and many of his crew mates to swim to shore to save their lives.

“He was also shot up really badly at the Battle of Tinian,” he said.

His grandson, Trenton Oliver, said his grandfather would only talk about his war years in vague terms. “He would only say bad things happened,” Oliver said.

He became one of the most distinctive small business owners on the Navajo Reservation, operating a general store, a gas station, a hardware store and a restaurant in the center of Chinle that became known affectionally as “Begaye’s Corner.”

But as he recalled in a 1971 interview after being named by the BIA as “Indian Small Business Man of the Year,” his entry into this world was a humble one.

The hogan was located in Red Valley and he spent many of his early years tending sheep for the family. He was attending high school at Fort Wingate and was preparing to graduate in 1943 when he decided to join the Marines, who assigned him to get training as a Code Talker. He would later get his GED after he was discharged.

After his discharge, Begaye became a guidance counselor at BIA schools. It was during this time that he met His wife, Helen, who was a cook’s helper at a nearby boarding school. He would stay with the BIA for 13 years.

In that 1971 interview, Begaye said he managed to save $3,000 and said that after a while he wasn’t as happy as he once was being a guidance counselor and decided, after a sleepless night, that he wanted to own a service station.

He said he had no experience. “I couldn’t even pump gas,” he said.

But he realized that things were changing in the Chinle area. More roads were being paved, more tourists were making the trek there to visit Canyon De Chelly and if he set up shop there, he would have no competition for 25 miles.

The BIA leased him land at a crossroads and with the help of his brother, John, and a friend, they built an office of cinder blocks. Within weeks, pumps and a tank were brought in as well as a sign displaying a bright red flag. At that point, Begaye the entrepreneur was born.

Realizing that they had encumbered a lot of debt, the Begayes kept their BIA jobs, allowing John Begaye to run the service station during the day and they would help out on weekends. The business was a success from the very beginning, reporting pumping a huge 32,000 gallons of gasoline during the first month of operation.

Begaye was proud of that achievement, pointing out that this figure was comparable to the amount that gasoline stations in Gallup pumped. With that level of business, it wasn’t long before the Begayes began adding more services and businesses.

As business increased, the Begayes realized that they had to take a more hands-on approach and it wasn’t long before they were sitting on a gold mine. He was especially proud of the fact that they did this without having to take out any loans, at least in the beginning.

In that 1971 interview, he told of visiting Phoenix in 1964 and seeing a new Shell Station. He said to himself he wanted one so he convinced Shell to loan him $11,000 which he repaid early through his profits.

Over the next few years, he added more services – a restaurant and stores that sold hardware, feed, auto parts and sporting goods. Everything he added turned out to be a success and very popular with his customers.

In 1970 alone, he would gross $750,000 and his success drew other Navajos to start small businesses in the community.

In the early 1980s, the Navajo Times did a series of stories talking to the early Navajo entrepreneurs like Begaye in Chinle, “Doc” Anderson in Fort Defiance and Mike Nelson in Window Rock.

Even then, he remained humble. When asked what his secret was, he said he owed it all to the people in Chinle who trusted him. It was their loyalty that made his businesses successful.

He was like that with family members as well, said Oliver. “He was a very kind, gentle and private person,” Oliver said.

He was also a man who loved gardening and growing things like zucchini and squash, which would dominate his life more and more as he grew older and turned over more of his business to others. He eventually turned over his lease to his daughter who eventually would lease it to Western Refinery.

Navajo Nation President Jonathan Nez praised Begaye on his Facebook page for his dedication to the Navajo people.

“The Navajo Nation have lost another brave and selfless Diné Warrior,” he said, “who sacrificed more than we will ever know to defend our country.”

U. S. Sen. Tom Udall also issued a statement expressing his sorrow at Begaye’s death: “We remain grateful for his work and for his commitment — both will live on.”

His funeral is set to be held at 10 a.m. Friday at Chinle Potter’s House Church.