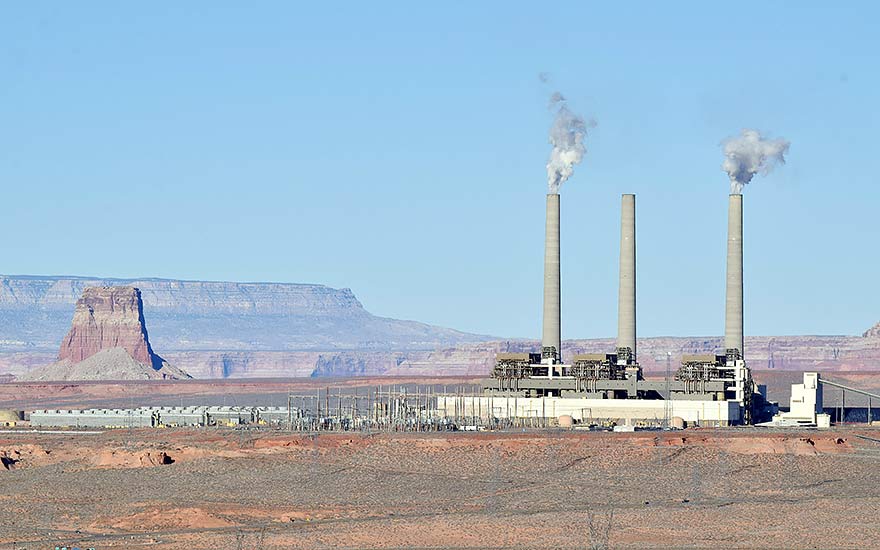 Navajo Times | Krista Allen
The view of the Navajo Generating Station from LeChee Chapter on Saturday afternoon, March 16, 2019. A bill that would have supported Navajo Transitional Energy Company’s acquisition of the power plant and Kayenta Mine failed by a 9-11 vote before the Naabik’íyáti’ Committee on Thursday evening.

Only 9 delegates voted in favor of the bill (No. 044-19), which was discussed by the Naabik’íyáti’ Committee with a full house watching at the Department of Diné Education building.

The bill is now dead unless a delegate introduces a new bill to revive the discussion.

“This will be … a memorial for the 24th Navajo Nation Council’s most controversial issue to be voted on,” said Delegate Rickie Nez, who sponsored the legislation.

Nez said he is in support of the NGS and Kayenta Mine workers and their families who will be affected by plant closure just three days before Christmas.

“They are hard workers who support their families and finance their children’s education from these employments,” Nez said in Navajo as he presented the bill alongside Steve Grey, the governmental and external affairs director at NTEC, and NTEC spokesman Erny Zah.

“What will the effect of the closure of Navajo Generating Station and Kayenta Mine cause the operation of the Navajo Nation government without $40 million?” he said. 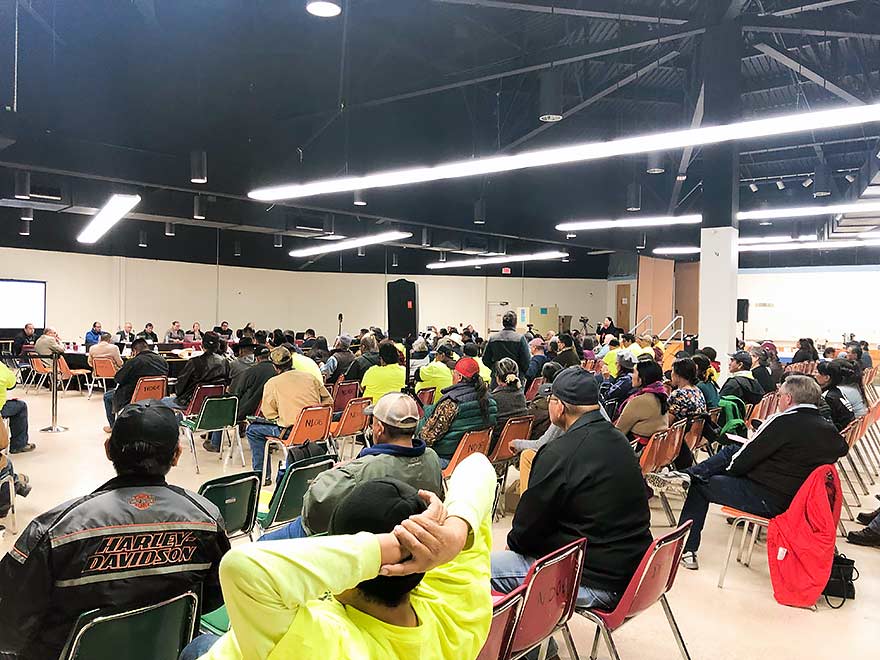 Navajo Generating Station and Kayenta Mine workers and their families listen to debate regarding Navajo Technical Energy Company’s acquisition of both NGS and the mine during a special Naabik’íyáti’ Committee meeting Thursday at the Department of Diné Education.

“Much of the chapter allocation will be reduced,” he said. “Will our Navajo students continue to receive an amount of funding necessary for continuing their education? What about our veterans’ funds? How much will be cut? How many of the Navajo Nation’s employees will be laid off or forced to retire? This is up to us.”

Nez explained that he beseeched ‘áshįįh tó ńlį́, na’anish dah ooldahji, or Salt River Project, the plant’s operator, to come to the table and restart negotiations with NTEC.

“SRP needs to be reasonable with their request of unlimited guarantee and waivers,” Nez said in Navajo. SRP representatives had proposed NTEC guarantee its cleanup efforts by putting up Navajo Nation assets as collateral, something the company refused to do and the legislation does not authorize. At this point, the negotiations have broken down.

Grey said transactions often happen between Party A and Party B, but it’s unusual when a Party C comes into a transaction deal.

“That is exactly what SRP proposed,” Grey explained. “And that Party C was the Navajo Nation. When (SRP) did that, they did something that would be devastating and (the SRP representatives) knew the Navajo Nation would have a hard time doing these unlimited guarantees.”

“When SRP did what they did, they stopped the negotiations because they knew that NTEC – it would be placed out of their hands,” Grey explained.

Grey said in those non-disclosure agreements, NTEC and SRP representatives shared confidential information, which NTEC officials had to abide by.

“And that’s what we’re abiding by, that confidentiality as we work our contract with them,” Grey said. “But they needed an out. They needed a way to stop this, what was coming, what was about to occur. And through that, that’s where they bestowed it back on the Navajo Nation.”

“If certain documents are being prevented for the Council to review it, what’s the purpose of us even discussing this,” Begay said in Navajo, “if (the non-disclosure agreement) is not presented to us. And how does this relate to the town halls that we’ve had?”

There are two ways the Nation can obtain that information, according to the Department of Justice. One way is the plant owners would have to agree that NTEC can share information with the Nation. The other is the Nation would also have to be part of the non-disclosure agreement.

However, if the Nation is covered by the agreement, then NTEC cannot freely share that information with a third party, including the Nation.

Grey said there was a timeline laid out.

“So, the first target was to get the information to Los Angeles Department of Water and Power,” Gray said. “That’s here, right now, upon us. So NTEC has done everything it can from a business case standpoint because now it has shifted over to the Navajo Nation to vote on this resolution that clearly states what should be done. It’s out of NTEC’s hands. It has now reverted back to the Navajo Nation.”

To read more, pick up the March 28 edition of the Navajo Times and check by our website for any updates.