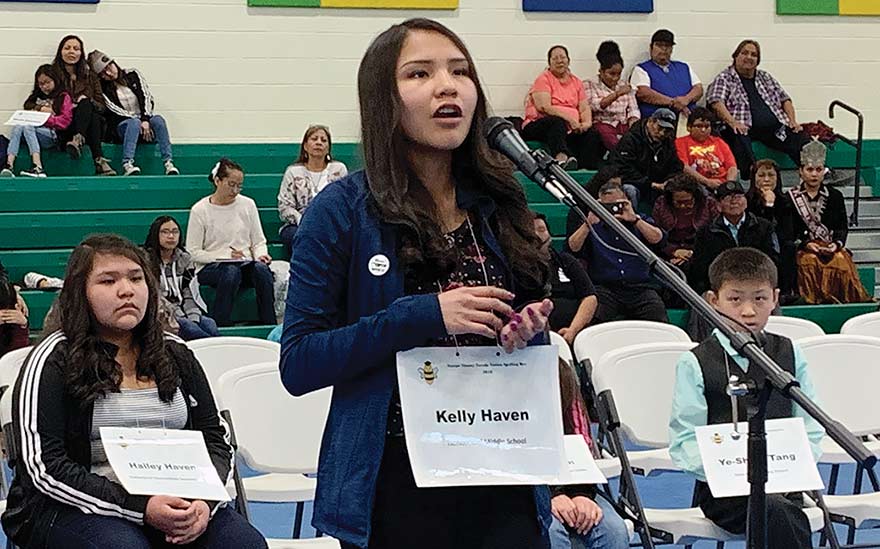 Navajo Times | Cindy Yurth
Kelly Haven, the eventual winner, writes with her fingers as she spells a word at the Navajo Times Navajo Nation Spelling Bee.

Kelly Haven tactically picked apart the most challenging words only to successfully spell them back together in order to win the Navajo Times-Navajo Nation Spelling Bee.

Her winning words were “heteromorphic” — having different forms at different stages of life — and “interlocution” — a conversation between two or more persons.

A Tséhootsooí Middle School 8th-grader, Haven will be returning to the National Scripps Spelling Bee in Washington, D.C., for the third time after qualifying last Thursday in an epic battle against Tuba City Junior High School 7th-grader Maria Macaraig. After 106 rounds, two-time Navajo Nation champion Haven and impressive newcomer Macaraig had exhausted the spelling bee list, leaving judges and pronouncers having no choice but to use words from the Merriam-Webster dictionary, which is used at the national spelling bee.

“I feel so satisfied with myself,” said an exhausted Haven. “I was so happy. I was seriously starting to settle with second place. It was so discouraging when you missed a word after getting a word correct.”