‘The next era’: Daryl Noon sworn in as new chief of police 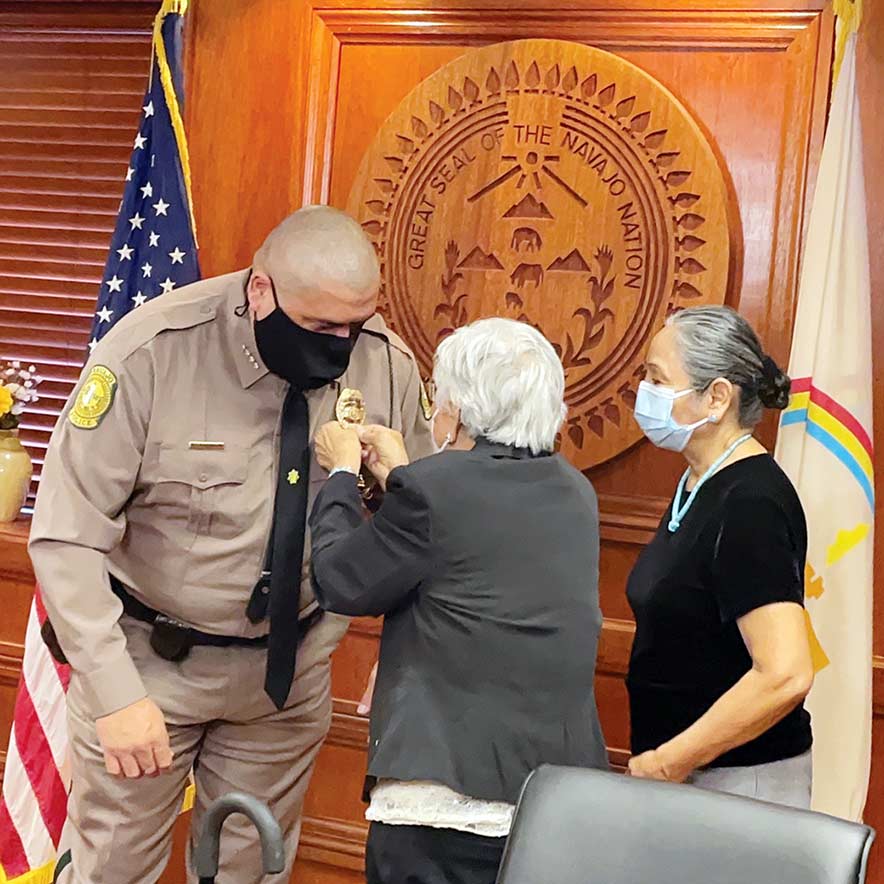 Daryl Noon was sworn in as the new Navajo Nation chief of police on Monday.

Noon was born in Fort Defiance and raised in Shiprock.

He has worked in the law enforcement field for approximately 25 years.

Before starting his position as the deputy police chief of the Navajo Nation in 2019, he worked in the Farmington Police Department for 23 years holding many different positions.

“We know that there are many challenges ahead, but we are fully confident that Mr. Noon’s experience and background will help lead our frontline warriors to many great accomplishments and increase the safety of our communities and our people,” President Jonathan Nez said in his remarks. “This is the next era of the Navajo police department.”

Navajo Police Capt. Emmett Yazzie said he believes that Noon will perform “very well” in his new position and that he has some of the qualities and characteristics that former Chief of Police Phillip Francisco had.

“I think we’re going to be very progressive and he’s going to also continue to revolutionize the Navajo Police Department as far as us moving forward into the 21st century, not only in technology but especially in manpower,” Yazzie said to the Times.

He said one of Noon’s primary goals is to recruit and retain officers.

“We want to retain a lot of these professionals that are working here and retain them here because a lot of them do go outside and they become chiefs or become supervisors or leaders from the outside,” Yazzie said.

He also said that another goal is to grow the police force up to 300 officers then ideally up to 500.

Noon reinforced Yazzie’s comments and said the focus and running priority for him is to get more people on board due to the number of initiatives that the department plans.

Currently the Drug and Gang Unit must take people from districts to fill the unit which leave them shorthanded.

Due to problems like this, Noon wants his focus to be on the academy and getting people hired.

He also said the department is looking into developing a corrections academy and a police transition position.

This position means people could be hired onto the police force as early as 18 years old where they can help with transports, phone in reports, and other related tasks.

When it comes to public safety, Noon wants to revisit the idea that Francisco had which consists of establishing sobering centers across the Navajo Nation.

“We started a pilot project in Tuba City,” Noon said. “It seemed to be doing well because the message the chief had always been pushing out is, you know, we have to address the root cause of the problem and a lot of that is drug and alcohol abuse.” 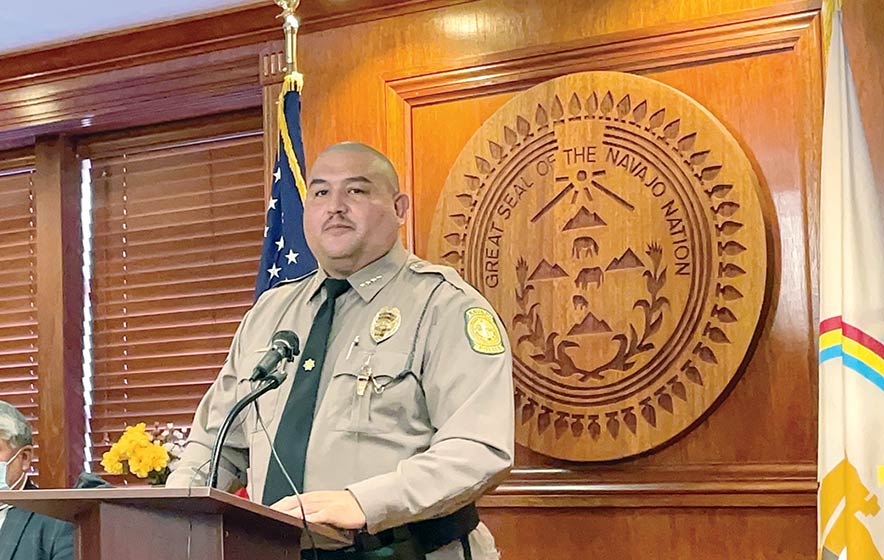 Newly sworn in Chief of Police Daryl Noon speaks after taking the oath to office.

He hopes this time around he gets everyone to the table because he knows it will take more than the police department to battle these issues.

“I mean, we were supposed to have a meeting with them last week,” he said, but it was canceled because of weather but I’ve been in communication with them, and I am looking forward to strengthening those relationships.”

He said he’s going to need their help when it comes to pushing some of the initiatives through.

When Francisco announced he was leaving the chief of police position in November, he spoke to Source NM and said one of the contributing factors to him leaving was the lack of support he received from Council delegates, specifically the Law and Order Committee, which oversees the police department.

He said the committee did not help him much with the projects he accomplished and attributed most of the accomplishments to his staff and other resources he had.

Noon referenced this and said there is too much at stake and too many people depending on him to get involved in “some of the negative things that have come out.”

“We’ve invited delegates to come speak with us whenever there’s a concern, that’s an open invitation for any one of them,” he said. “I can tell you from my end, that’s not going to be an issue.

“I’m willing to sit down and talk with any of them,” he said. “I know there’s a lot of problems out there that they want to address.”

He said every entity has different ways to go about accomplishing tasks to meet the demands and needs from the people to which they answer.

“I’m not here to fight with anybody,” he said. “I really enjoy working here, I’ve enjoyed my three years here and I just know we all have to work together.”

Noon said becoming chief of police was not part of his career path, however, he said he feels like he has been doing the job already and he is excited.

“I’m looking forward to it, I am excited, and I really enjoy the staff that we put together,” he said. “I think they all want the same thing, so it makes what we do a little bit easier.”

Delegate Eugenia Charles-Newton, chair of the Law and Order Committee, did not respond to requests for comment.