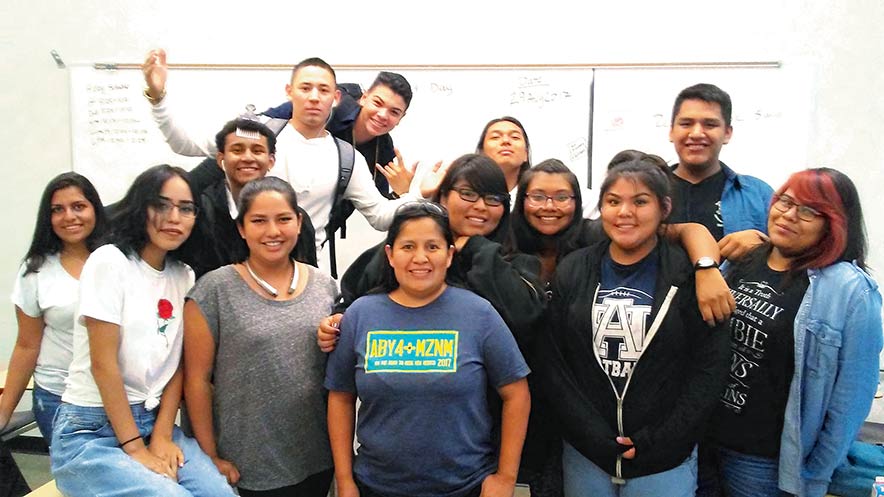 Before and after the turn of the 19th century, the federal government was determined to wipe out Native languages setting into place sweeping national policies like mandatory boarding school placements.

The goals set by the government back then are tragically on track to be realized in the near future unless there’s serious intervention, according to a data source.

As reported in High Country News, Ethnologue, an index of world languages, documents that of the 115 Indigenous languages spoken in the U.S. today, two are healthy, 34 are in danger, and 79 could go extinct within the next generation.

To assist in turning around statistics like these, the U.S. Congress passed the Native American Languages Act in 1990. The act aims to preserve, protect and promote the rights and of tribal members to use, practice and develop their languages. It has some money behind it, but grants are on a competitive basis.

In the 30 some years since the passage of the act, tribal leaders voiced their concerns that more needs to be done to undo what was done in the past.

In consultations with the federal government, they said, according to a federal report, there’s limited amount of Native language materials and curricula; limited number of certified teachers fluent in Native languages; lack of support by school leadership; and lack of professional development opportunities.

There’s also challenges coordinating programs within communities, engaging in consultation with the federal government and a need for scientifically valid research along with greater access to federal archives.

The announcement was made as part of the 2021 White House Tribal Nations Summit, which brought together government officials and leaders from federally recognized tribes.
Here’s a rundown of some of the multi-agency MOA goals:

• Identifying barriers that impede federal implementation of Native language activities.
• Identifying research that explores educational attainment and Native language retention and/or revitalization.
• Simplifying the process to integrate Native language instruction and other cultural activities into educational settings, including libraries, museums, cultural and historic preservation programs, and in the arts.
• Strengthening Tribal consultations on the issue of Native languages.
“From our libraries and schools to museums and cultural centers, the (Interior) Department is proud to help lead this interagency effort to encourage programs and projects to include instruction in and preservation of Native languages,” said Haaland in a press release.
Cardona added, “I’m proud that the Biden administration is committed to supporting the preservation and revitalization of Native languages.”
Voicing his thoughts in the same press release, Becerra noted, “Investing in linguistics is key to supporting our tribal communities and protecting their history, and today’s investment should help achieve this important goal.’’

Lynn Trujillo, Sandia Pueblo, New Mexico Indian Affairs Department cabinet secretary, said, “We applaud this work and the signing of the MOA, as it is more critical than ever to preserve indigenous cultures and languages in New Mexico and across the country.”

“Most tribal language teachers in New Mexico have created curriculum materials based on their cultures, but more needs to be done to support these instructors and the overall infrastructure to ensure these languages live on for future generations,” she said.

Trujillo said the Indian Affairs Department will continue to work closely with federal agencies to identify funding opportunities for Nations, tribes and Pueblos and assist tribes in seeing their projects through to fruition.

She said having more amá sánís and acheiis, grandmas and grandpas, in the classrooms, would make the most difference and they should be paid a stipend.

“I remember when I was in pre-school, a kindergartener, I had an ama sani. She was like a teacher aide; she was in the classroom and we had no choice but to speak to her in Navajo. I think that is something they (the federal government) needs to (support),” she said.

If Walmart can, we can

“If Walmart can have a grandma and grandpa greeter, they (students) could have amá sání and acheii greeting them at the door in the morning. They need them. They will learn the language back sooner,” she added.

There are around 120 Native language teachers in the New Mexico public education system, according to a Public Education Department spokesperson. An online public school system source notes that there are 199 schools serving 96,507 public school students.

Chiquito also said time is of the essence in the classroom.

“Just having 45 minutes in the classroom doesn’t help. Block schedules help us where we can have at least two hours (of teaching time),” she said.

She hopes that the new initiative includes funding to make the needed changes happen.

“It’s time for us to revise all of this. It starts with funding. You have to prioritize what it is about. It’s money, that’s the bottom line,” she said.