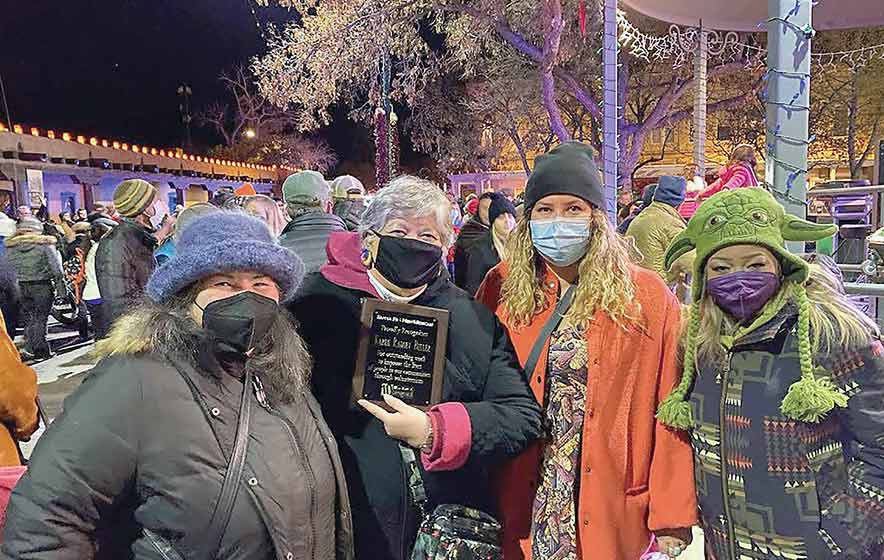 Karen Radney Buller, a Comanche with Oklahoma roots, is one of the Santa Fe New Mexican’s 10 Who Made a Difference honorees.

Buller is an advocate for Native Americans. She has lived, worked, and volunteered in Santa Fe for 38 years.

She raised her family in Santa Fe and has contributed to the welfare and improvement of the lives of everyone, especially Indigenous people.

She has participated in organizations and activities that promote equality, justice, opportunity and awareness.

She volunteers time and money and raises funds for the Santa Fe Indigenous Center.

Jared Blumenfeld, California Secretary for Environmental Protection, said, “We are thrilled to welcome Bidtah to CalEPA’s leadership team. Her vision, brilliance and compassion will help California achieve our ambitious agenda of combatting environmental racism by empowering communities of color, rebuilding relationships with tribal nations, and helping champion environmental issues and tolerance on the U.S./Mexico border.”

Becker holds a bachelor’s from Georgetown University and a law degree from the University of New Mexico.

Becker has served on the Water and Tribes Initiative in the Colorado River Basin where she co-chaired the Universal Access to Clean Water effort, on the New Mexico Interstate Stream Commission, and on the Navajo Nation Water Rights Commission.

Becker is also a champion for Indigenous arts and artists. In 2012, President Obama appointed her to serve as a trustee for the Institute of American Indian Arts and Culture. She and her husband are sustainers of gallupARTS, a nonprofit arts council serving Northwest New Mexico and 2021 recipient of the Governor’s Award for Excellence in the Arts in New Mexico.

President Biden recently nominated her to serve as a member of the National Council on the Arts. Becker has also served two separate terms on the board for the Southwestern Association of Indian Arts, including one year as board chair.

SOUTHERN UTE RESERVATION – Lorelei Cloud successfully received a majority of the votes cast in the 2021 General Election held on Nov. 5, according to the Southern Ute Tribal Election office.

While in office, she advocated for tribal water rights and represented the tribe on the Ten Tribes Partnership, serving as chairman from 2017 to 2018.

During Cloud’s year out of office, she served as a member of the Water and Tribes Initiative and the Indigenous Women’s Leadership Network (as co-chairman).

She has four children (three daughters and one son) and three grandchildren.

The second Tribal Council seat will be determined by a run-off election on Dec. 17. Candidates are Vanessa Torres and W. Bruce Valdez.

WASHINGTON – Jackson Brossy, Diné, on Monday was announced as an appointee to the position of assistant administrator in the Small Business Administration’s Office of Native American Affairs.

Before joining the SBA, Jackson served as executive director for both the Native CDFI Network, a nonprofit advocacy group, and the Navajo Nation Washington Office, the official office for the largest tribe in the nation.

An advocate of access to capital and technical assistance for Native entrepreneurs, Jackson also serves on the board of Prosperity Now, Change Labs, and the Federal Reserve Bank’s Center for the Indian Country Development Leadership Council.

He attended Stanford and Harvard University.