‘Get it done’ says senator about To’hajiilee pipeline

Renee Chaco-Aragon of To’hajiilee wants her children to have the opportunity to live on their tribal lands as long as they want to. To’hajiilee, a satellite community of the Navajo Nation, is located about 24 miles west of Albuquerque.

Aragon, her husband Arthur and their children spoke out during a Zoom meeting on Monday, Indigenous Peoples’ Day, addressing the ongoing water crises in their community of about 2,500 members.
“We need to be seen! We need to be heard! What better day to do it than (today)?” Aragon expressed.

“Water is music to my ears,” said Melissa. 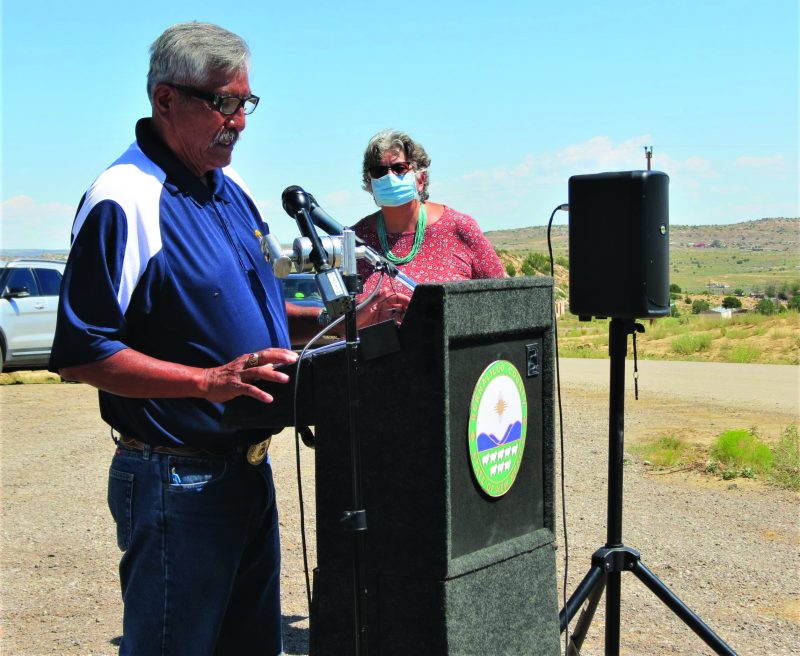 Special to the Times | Colleen Keane
Addressing members of the media on July 29, Chapter President Mark Begay advises them that the To’hajiilee community is facing a water crisis. Bernalillo County Commissioner Debbie O’Malley listens in the background.

To’hajiilee has been relying on one dysfunctional water well before and during the ongoing coronavirus pandemic. Engineers say it could break down, like it has in the past, at any time.
“This is very nerve-wracking  to deal with on a daily basis,” said Aragon. “The entire community is impacted by this. There is no water.”

She stressed that the children of the community are the ones who will suffer the most without a long-term solution.

“Their future is not for certain,” she said. “What if (when they grow up), their community is completely gone, because we have no access to water. Our culture is going to be gone because we are going to be forced to live other places. They will lose their lineage to their grandparents.”

Friends of To’hajiilee, a community action group, convened the meeting to let the people of To’hajiilee know they have not been forgotten in their efforts to get Navajo water piped into their community utilizing the Albuquerque/Bernalillo water system.

Mark Begay, chapter president, said he’s been working on a long-term solution for some time now. The holdup has been getting permission to run part of a proposed 7.3-mile pipeline through private land to reach a city/county water tank. The plan has the support of the city/county water authority.

The two-mile stretch of land is owned by Western Albuquerque Land Holdings. WALH’s property is managed by Garrett Development Corporation, GDC of Arizona.

Begay said he began reaching out to GDC two years ago. He advised them that the Navajo Nation would pay for the easement and construction of the pipeline and that the water piped through the system would be Navajo water.

Two million dollars from CARES Act funding has been set aside to cover costs.

WALH’s property consists of thousands of acres of land on the barren, windswept area west of Albuquerque set aside for a futuristic suburban community.

Tom Carroll, of Carroll Strategies, the public relations spokesperson for GDC, said that the company didn’t respond to early requests for negotiations because they were “informal” and not an official request from the county.

But there’s been nothing quick about it.

The community has been waiting before and throughout the ongoing pandemic to get fresh water.

“It is our water and we need to be able to utilize this water,” said Aragon. “We were given this water by God. No man should be standing in the way of what we can and cannot have to preserve our community, our life, our families, our children.”

To’hajiilee has relied on donations from private, city, county, federal and tribal sources for drinking water.

For washing dishes and bathing, they’ve been using well water.

To show the quality of the water, Aragon held up a jar of greyish water with sediments settling on the bottom.

Dozens of people participated in the one-hour online meeting that included a blessing in Navajo by Mark Begay, the water song by Malcolm Yepa, Black Eagle Singers from the Pueblo of Jemez, and a reading of the city of Albuquerque’s Indigenous People’s Day proclamation by Mayor Tim Keller.

In addition to the Mayor, tribal liaison Terry Sloan, Diné, and spokesperson Alan Armijo attended on behalf of the city.

Laurie Weahkee, Diné/Cochiti/Zuni, the spokesperson for Friends of To’hajiilee, said pressure needs to continue to make sure the pipeline gets constructed as soon as possible.

“We are deeply concerned that WALH is stalling the process,” she said. “They are slowing it down, holding stake-holder meetings.”

Soon after a press conference was held in July bringing attention to the water crises, a task force surfaced chaired by County Commissioner Steven Michael Quezada, District 2.
Begay stepped away from the task force when it didn’t include O’Malley who represents To’hajiilee.

Besides, Weahkee said it was a little late in the game for all of this.

“They should have done this (the task force) at least two years ago,” she said.

She said that she’s concerned that there will be more delays.

“Bernalillo County Commission has been moving forward. But, we want to keep the pressure on so they don’t deter to another strategy or tangent,” she added.

In the spring, the county commission agreed to condemn the land if an agreement wasn’t made.

Carroll said that his clients haven’t been blocking the process.

“We really want to see the Tohajiilee community get the water for their people,” he said. “We are very dedicated to that. We have been dedicated to that really for almost a year but definitely since February.”

Carroll provided two letters to the Navajo Times, one from February and a second in September referring to questions they wanted answered.

Carroll said that his clients are now ready to sit down and talk.

According to Carroll, Ivy-Soto volunteered to bring the city/county water authority, WALH and To’hajiilee to the table to work out an agreement. Ivey-Soto recently took over as chairperson for the task force after Quezada stepped down.

“Here is the bottom line, we (WALH/GDC) are ready to go. We are waiting for the senator to set up a meeting so we can work out these issues. We are hoping it happens soon,” Carroll said on Tuesday.

“This is between the chapter, the county and landowner. It’s not that complicated. Just get it done!” Shendo exclaimed.

“They (WALH) have the ability to come forward with a proposal. The ball is in their court,” said Apodaca.

“Anytime during the last two years they could have engaged with To’hajiilee and made a real estate agreement,” added O’Malley.

With a deadline for spending CARES Act funding by the end of December, O’Malley said condemnation is not off the table.

“We have time constraints; we can’t mess around,” she added.

As of Wednesday morning, Friends of To’hajiilee has collected 1,669 signatures in support of the To’hajiilee water pipeline.

“We want people to know we are aware, we are active and we want to help our neighbors in Tohajiilee,” said Weahkee.