Dineh Benally is continuing his hemp operation and the Navajo Nation is fed up.

Even after the Shiprock District Court granted a motion for a temporary restraining order and preliminary injunction against Benally, his workers and others from illegally growing, producing, transporting, licensing and selling industrial hemp within the Navajo Nation, his operations have noticeably continued.

The Navajo Nation has filed an amended motion to enforce the court’s Sept. 18 TRO and preliminary injunction. Navajo Nation Police Officer Kyle Simms, who is assigned to Shiprock area, stated in an affidavit obtained by the Navajo Times that, following the TRO and preliminary injunction, he and other officers contacted each hemp/cannabis farmer and notified them of the orders and that they would have to stop operation.

“In providing these notices, we encountered many locked gates,” stated Simms, “which obstructed our ability to observe if hemp/cannabis operations were continuing.”

Simms stated they have been denied access from Benally’s security who have told Simms they need directions from “their boss” before they can give access to the hemp farms. From previous encounters with security, Simms stated he understands the boss to be Benally. 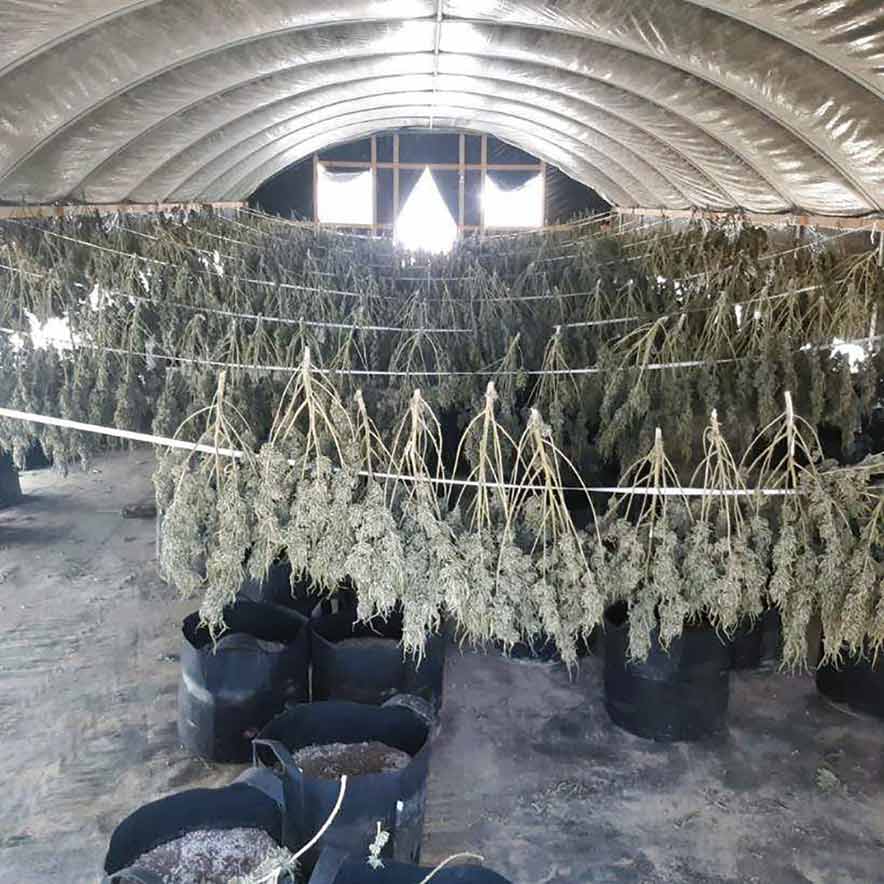 Courtesy photo | Navajo Nation EPA
Hemp plants hang upside down to dry in a hoop house on one of Dineh Benally’s farms.

Two days after the orders of the TRO and preliminary injunction were given, Simms said he was involved in a DUI checkpoint near Hogback, New Mexico. He came into contact with a non-Navajo hemp farm worker, who told Simms he was headed to work on a hemp farm. “His supervisor at the farm was Dineh Benally and that Mr. Benally had told him to continue working after the issuance of the court’s temporary restraining order and preliminary injunction,” stated Simms.

“Mr. Benally had sent a text message to many farmers on a group text message on September 19… telling them to ‘keep moving forward.’”

Simms’ report of activity on the farms was just one of many other officers who have seen uninterrupted and ongoing hemp/cannabis farming in violation of the court’s orders.

Chief Phillip Francisco provided a list of officers and what these officers have witnessed with the ongoing operations after the court orders. At the William Badonie farm, an officer has seen lights, generators and workers inside the “the green houses.”

Another officer stated he had seen two commercial vehicles trying to get into the Time Franklins’ farm, but the officer informed the driver about the court order after which the trucks left the area.

Many other reports detailed farmers continuing to work and refusing to stop, generator activity, and U-Hauls transporting cannabis/hemp from farms behind the Shiprock Animal Shelter.

On Sept. 21, Ramie Nelson, a farm owner and employee of Benally, stated he informed the police that hemp operations continued on his farm. He said he inquired to Benally about the Sept. 18 court hearing and Benally told him “he did not know what Mr. Nelson was talking about.”

Benally also did not mention the court’s order.

Although these are a few examples of Benally’s continuing hemp production, there were also reports of Benally extorting and soliciting non-Navajo investors into believing the operations were legal and that he could issue hemp permits. These investors, having realized Benally defrauded them, are seeking to recover their losses and when confronted Benally said despite the court order he planned to continue on as scheduled and produce crops, they said.

“I came to understand that the promises and representation made by Mr. Benally to get me to invest in his operation were not true,” stated investor Irving Lin. “I have to come to realize that the ‘hemp’ permits for which I paid Dineh Benally were in fact complete fabrications as Benally has zero authority to issue any permits on behalf of the Navajo Nation or even the San Juan River Farm Board.”

Lin said that on Oct. 2 Benally told him he was continuing his farming operations and crops would be ready for shipment. Lin said he has tried to find a way to recover some of his investments.

Last week, Navajo Environmental Protection Agency officials said they conducted inspections of the many hemp farms and had noted numerous violations. The director for NEPA, Oliver Whaley, described the violations and even stated operations seem to be continuing. He implored that a permanent injunction be placed on Benally and his hemp farms.