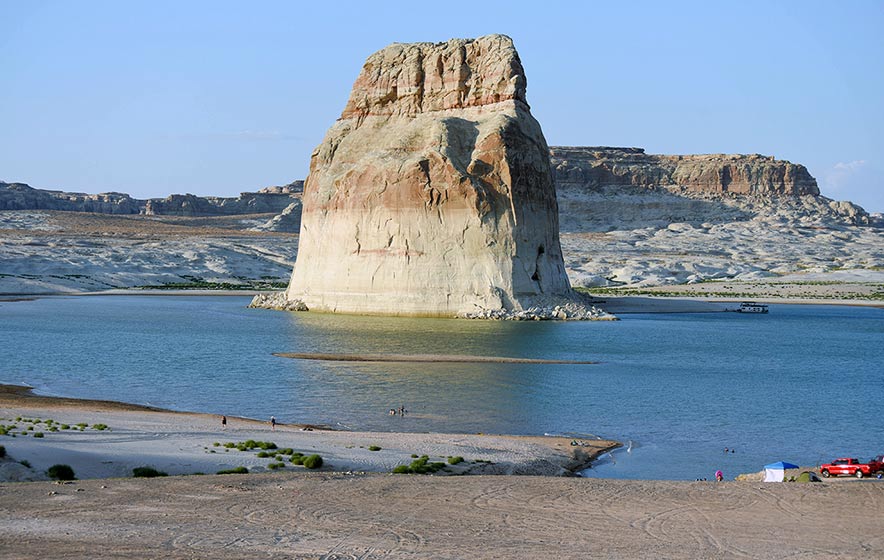 Navajo Times | Krista Allen
Lone Rock shows “bathtub rings” as the water level in Lake Powell declines. The bathtub rings are a result of calcium carbonate and other minerals attached to the rock at Lone Rock Beach near Wahweap Bay, Utah.

Inflow from the Colorado River has been below average every year but five since 2000, when the Western U.S. entered the beginning of what scientists call a megadrought triggered by a combination of a natural dry cycle and human-caused climate change.

As a result, Lake Powell was at less than half capacity in January 2019.

The highest water level recorded was in July 1983, when the water swelled the banks of the lake and river in every direction across the semi-arid landscape.

The lowest level recorded is this month: August 2021. Now, a pale outline is visible along many parts of the lake.

When the water level drops, canyon walls that were once inundated with water are exposed, making a “bathtub ring.” The only time the bathtub ring is not visible is when the lake is full.

When Lake Powell is full (elevation 3,700 feet above sea level), it extends 186 miles up the Colorado River and 75 miles up the San Juan River, creating 1,960 miles of winding canyon shoreline.

The reservoir first filled in June 1980. For the lake to return to this level again, the pool would need 11 years of regular inflow.

But the water level has plunged as the American West experiences a megadrought. It’s one of the worst on record.

For part of the region, which is broiling under a record-breaking heatwave, conditions have been bad for decades. There have been wet years here and there, but most of the region has been in a chronic drought since 2000.

Too little water is coming into the lake, and too much is being sent downriver to maintain water levels at Lake Mead. Water levels at Mead have also plunged to the lowest point since the reservoir was filled in the 1930s.

In 1986, when the lake was last full, the lake had a total storage capacity of 26.2 million acre-feet and a surface area of 161,000 acres. Each year from 1980 through 1987, the lake filled or nearly filled (above elevation 3,682) but fluctuated 25 feet or more during the year, according to the Bureau of Reclamation.

Since 1987, the lake’s level receded. Vast areas of the deltas are exposed, and some vegetation have been established.

Most of the flow of the Colorado River originates in the upper portions of the Colorado River in the Rocky Mountains, according to the Bureau of Reclamation. The Upper Basin – defined by the river network above Lees Ferry near Marble Canyon, Arizona, is comprised of four states: Colorado, New Mexico, Utah, and Wyoming.

Given ongoing historic drought and low runoff conditions in the Colorado River Basin, downstream releases from Glen Canyon Dam and Hoover Dam will be reduced next year because of declining reservoir levels.

In the Lower Basin – Arizona, Nevada, and California – the reductions represent the first shortage declaration, demonstrating the severity of the drought and low reservoir conditions.

Assistant Secretary for Water and Science Tanya Trujillo said the Colorado River is facing unprecedented and accelerating challenges and the only way to address these challenges and climate change is to use the best available science.

“And to work cooperatively across the landscapes and communities that rely on the Colorado River,” Trujillo said.

If this trend continues, the National Park Service is advising boating-based businesses in and around Dá’deestł’in Hótsaa that rely on the lake to make water changeability part of their business model.

This means that because of the drought, lower water levels are expected over the next several months will impact water access points and boat launch areas on the lake, according to the Glen Canyon National Recreation Area.

The park is maintaining boat launch access up-lake and down-lake with temporary ramp extensions and other measures as lake levels continue to drop. But not all ramps will be open.

Significant changes to the shoreline will affect usability of boat launch ramps throughout the year, especially in the warm months.