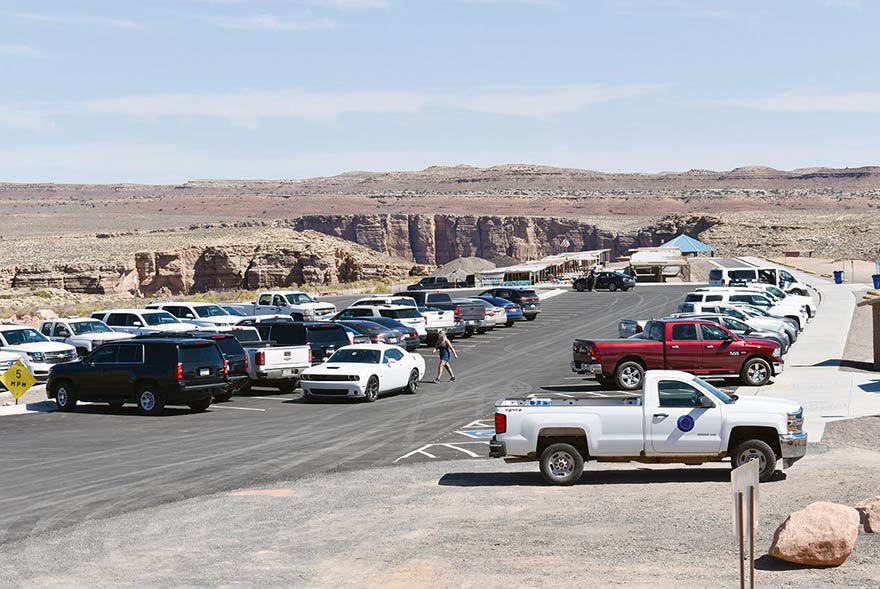 Navajo Times | Rima Krisst
Outlook No. 1 at the Little Colorado River Gorge Tribal Park has a new paved parking lot and access road, while the vendor booths are now sunken behind the lot toward the gorge. The next phase of construction will update and redesign the vendor area.

One would think that a ribbon-cutting ceremony for a newly paved parking lot and access road at the Little Colorado River Tribal Park would include the vendors who are the heart of it, the legislative committee that oversees it, and the community that encompasses it.

However, that wasn’t the case this past Monday when members of the executive branch from Parks and Recreation, Navajo Department of Transportation and the Division of Natural Resources, along with keynote speaker President Jonathan Nez, got together at the tribal park to make congenial speeches and pat each other on the back for their accomplishments. Unacknowledged were the LCR outlook vendors, who were left off of the agenda.

“It is sad that the event has no mention of the vendors as part of the success team,” said Candis Yazzie, spokesperson for Dzil Libei, the Cameron nonprofit that represents their interests. “Our vendors took major hits in the development of this parking lot.” Former delegate Walter Phelps, former park manager Helen Webster, Dibble Engineering, the Arizona Department of Transportation and Show Low Construction, also in attendance, were among those recognized for their contributions to the project.

The agenda, put together by Parks & Rec, also left off present members of the Resources and Development Committee, the department’s legislative oversight. Little Colorado River Tribal Park Manager Edbert Little, who says he doesn’t have a Navajo Nation email address, declined to comment when asked how he communicates with vendors.

“There was no respect shown to cultural values or traditional Navajo thought in reference to the way the vendors were not included or even invited to have some cake,” said Yazzie. “The event blatantly displayed how the vendors are seen by the parks department and those involved with the project.”

Community member and Arizona State Sen. Jamescita Peshlakai, who grew up vending at the LCR outlook, said she also wasn’t invited. “I’m just crashing this party,” said Peshlakai. “I’m from Cameron, I’m a state representative, and I helped secure the funding for this. I grew up selling jewelry here, and I wasn’t invited.”

Peshlakai said she showed up an hour early just to tell Little that she didn’t appreciate the “disrespect shown to the local people.” “This is just politics,” Peshlakai said afterwards. “We’re the ones who are most oppressed by our own nation,” she said. “The whole analogy of the crab in the bucket is evident here, behind diplomatic protocols.”

Several vendors who were at their booths down at the lookout said they didn’t know about the ribbon cutting. In addition to not receiving an invitation, no one bothered to walk down to the outlook to invite them up as the event commenced. “We never knew about it,” said vendor Chantal. “When I came in, I just saw the tent and we didn’t know what was going on. They don’t really communicate with us.”

“I wasn’t invited. I didn’t know anything about it,” said vendor Ashley. Neither woman gave her last name.

“We only heard it on the radio. There was no kind of memo from the park,” said Juanita Robbin. “It’s kind of strange — they left us out because we’re vendors.”

Even Division of Natural Resources Director Rudy Shebala was confused. “I would think the vendors would be here,” said Shebala. “I don’t think they would have been excluded purposefully. That seems crazy, right? “If they were purposefully excluded, we’ll have to deal with it, because that’s not right,” he added.

Yazzie said the debacle with the ribbon cutting was a perfect example of the continued communications breakdowns, especially with Parks and Rec Director Martin Begaye and now Little. “This was a golden opportunity to really include the vendors and thank them for the sacrifices they’ve made, and they didn’t,” said Yazzie.

Last spring, the LCR vendors were asked to dismantle their booths to make way for the $2.4 million Navajo Nation construction project. Many vendors were afraid the booths might actually be demolished without their permission.

After pleading for help from RDC in May, the vendors were permitted to keep their booths during construction. However, blocked access, the presence of heavy equipment, delays, and confusion among visitors prevented the vendors from having a fully productive summer, which negatively impacted their income.

Begaye said the new parking lot and access road are a “great improvement” and removed many of the prior safety hazards. Most everyone agrees that supporting infrastructure for tourism and economic development on Route 64, one of the highly travelled roads to the Grand Canyon, is a priority. However, how to value and uphold the generations of self-sufficient entrepreneurs who have grown that micro-economy hasn’t quite been figured out.

When asked if the vendors were invited to the ribbon cutting, Begaye smiled and said, “It’s a public event.” At one point during his remarks at the ribbon cutting, Nez, seemingly unaware of the absence of vendors, asked for all vendors in the audience to raise their hands, but there was not one. When told the vendors were not invited, Nez snapped, “Everyone was invited!” In his remarks, Nez had no problem adopting the LCR park improvements as part of the Nez-Lizer administration’s accomplishments. He discussed the importance of tribal sovereignty, self-sufficiency, and building opportunities for Navajo to harness tourism opportunities. However, he didn’t present concrete ideas for how to implement those goals. As a boost to vendors, Nez did offer that from now on, they would no longer be required to pay the $5 a day vendor fee to Parks & Rec. He also promoted “Buy Navajo, Buy Local,” which Cameron folks have been doing for over a hundred years.
Even Cameron’s delegate, Thomas Walker, who is vice chair of RDC, was not included on the agenda or formally invited. Walker said RDC legislative aid Shammie Begay forwarded an announcement about the ribbon-cutting event sent out by NDOT to RDC members as an FYI, but they didn’t receive an official invitation or request to speak. He also pointed out the absence of medicine people and spiritual leaders on the agenda, which is normally a part of protocol for this type of event.

Cameron Chapter Vice President Emmett Kerley, who was supposed to offer the invocation, was delayed due to a car accident on Arizona Route 64 with his wife, Helen Webster — they collided. Fortunately, neither was hurt. “We were so excited to get here, my wife and I ran in to each other,” he joked later on in his remarks.

Divided across the gorge

To add to everyone’s confusion, an RDC meeting was scheduled at the Cameron Chapter House at the same time as the ribbon cutting (10 a.m.), where vendors were on the agenda to present an update on their concerns about how the LCR Tribal Park is managed and how the vendors are treated.

Many people initially thought the two gatherings were one and the same and then realized they had to choose between one or the other. Walker said he tried to work behind the scenes with NDOT officials to push back the time of the ribbon cutting so that RDC could start their meeting and then attend the ceremony at the outlook, but that request was “not accommodated.” “They said ‘OPVP has another engagement and can’t change their plans,’” said Walker.

Alicia Chee, another spokesperson for Dzil Libei, said the whole situation caused further angst among vendors. “It was such a conflict that we had to pick one or the other at the last minute,” said Chee. “We thought, do we go to the ribbon cutting where we can tell Jonathan Nez, ‘This is how your people are being treated’ or do we come to RDC where we can get support?’” Chee said vendors felt they had a better chance of being listened to at the RDC meeting.

“We really need support and I personally don’t feel that’s going to come from Jonathan Nez,” said Chee, who stated publicly that she now regrets campaigning for him. So RDC continued with its business while the ribbon cutting was going on, and vendors lined up to complain about persons celebrating at the party across the gorge.

“We’re over here stressing over our livelihoods, while they’re over there bragging,” said Chee. Complaints from the vendors included the long-standing poor communication and unresponsiveness from Parks and Rec staff, inconsistency in park business hours, confusion about signage and fees for visitors, loss of income, safety issues, and continued uncertainty about what will happen to the vendor booths during the next phase of construction. Begaye, who was also scheduled to present to RDC on behalf of Parks & Rec, no-showed, adding fuel to fire.

RDC members agreed to call another meeting to address vendor concerns with Begaye, Shebala and Transportation Division Director Derrick Silversmith. “With the unknowns and uncertainties, certainly the vendors are justified with their questions and their concerns,” said Walker.

“At the end of the day, there is suspicion and it need not be this way. The vendors are a big part of the park operation and the park was established was around them.” Walker said the only thing that has changed over the years is the Navajo Nation government and its leaders. At the RDC meeting one community member estimated that three-quarters of Cameron is now Navajo Nation Tribal Park land, which impacts the community in many critical ways, including limitations on home-site leases and development.

“The artisans of our nation put us on the map,” said Walker. “We need to honor them and include them in tourism, commerce, and land management. Those who are self-sustaining and self-employed deserve to be protected and appreciated because they are taking care of their own.”