Among people speaking out about violent crime in the city, LaShanna Villanueva, Diné, is raising her voice. She wants lawmakers to take a closer look at reforms to deter youth from violent crime so other families don’t lose a loved one like her family has. Her son, Isaiah, was shot and killed at a party in the South Valley two years ago on June 27. 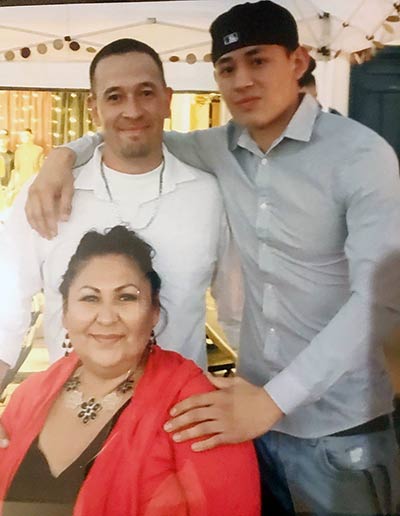 He was 19 years old. Invitations to the party were announced through Snapchat, a social media app, bringing together partygoers who had never met.

“I want to get my son’s story out there,” Villanueva said. “I don’t want him to just be another statistic. I want people to know my son had a life. His life mattered.”

The last two years have been a nightmare for Villanueva, her husband Steven, Isaiah’s younger brother and sister, his grandparents and everyone in their family.

“It’s been hard,” she said. “Losing Isaiah, we are the ones with a life sentence.”

According to news reports and interviews, 17-year-old Angel Grado was showing off a gun with an extended magazine at the party, an argument started and he allegedly shot Isaiah who was standing close by. Grado was a few of weeks shy of his 18th birthday.

A grand jury charged Grado with second-degree murder and tampering with evidence, according to the redacted indictment.

Isaiah was a 2018 graduate of Atrisco Heritage Academy High and a U.S. Army soldier. He joined the Army’s early entry program when he was 17 with his parents’ permission.

After graduating from Atrisco Heritage, he went on for advanced Army training and achieved the rank of specialist. “My son had all these dreams and ambitions,” Villianueva said. “Whatever he set his mind to, he would accomplish. He wanted to be a police officer. He was in the process of signing up for the sheriff’s department.”

Isaiah learned about traditional teachings from his mom, grandparents and his Navajo language teacher, Mildred Chiquito, at Atrisco Heritage. Chiquito, who taught Navajo I and II, remembered Isaiah as her most outstanding student. “I saw him every day (for two years),” she said. “He knew the (traditional) teachings.”

She added he demonstrated Diné values of respect for elders and giving back to the community. “He became a mentor to the younger (students),” she said. “He would say, ‘Listen! Respect Miss Chiquito, she’s trying to teach us something. What she’s talking about is something my grandpa taught me from hunting and the ceremonies.’”

Chiquito credited Isaiah for helping to start the first Native American club at Atrisco Heritage, which focused on giving back to the community.

To pay for the food, they organized fry bread sales at Atrisco Heritage. “Isaiah was always the first to volunteer,” said Chiquito. “That is who Isaiah was. (Losing him) took a big part from us. He was a carrier of the culture and we can’t get that back. He is missed.”

Villanueva said her family is seeking justice for Isaiah in a court system that is lenient to violent youthful offenders. “I am trying to bring a lot of light to what is wrong with the New Mexico system,” she said. “More and more, the offenders are juveniles. They know they’re going to get away with the crime.

“I just don’t understand that so many lives are devastated but no one pays for it,” she said. “Juveniles committing violent crimes is out of control.” Villanueva pointed out that if Grado had been arrested three weeks later when he turned 18, “We would be in a different ball park.”

She referred to the 2nd District adult court with accessibility to records, a larger courtroom that allows the victim’s and the defendant’s families to sit on opposite sides and if the defendant is found guilty, sentencing that meets the crime.

“How does three weeks make a difference?” she asked adding “If found guilty of a serious offense, no matter what age, they should be tried as an adult.” Grado’s trial is coming up sometime this summer. Villanueva understands that if he is convicted, the judge will decide whether to sentence him as an adult or juvenile at that time based on an amenability hearing, a hearing that determines if the juvenile is or is not amenable to treatment or rehabilitation.

“There will be no justice if Grado is found guilty and sentenced as a juvenile; he would be out of custody when he’s 21, a year from now,” she stressed.

Albuquerque continues to have rising homicide rates, according to Nicole Chavez, the founder of RObD — Repeat Offenders Bring Death, Devastation and Destruction. The group concentrates on stronger crime bills, victim advocacy and attention to homicide rates. Chavez’s son, Jayden, was killed in 2016.

“I’ve been fighting this fight for five and a half years and nothing has changed,” Chavez said. “It’s gotten worse. We are asking for (lawmakers) to listen, pay attention and create a solution.”

On Oct. 22, RObD sponsored a candlelight vigil for homicide victims attended by around 120 people. “That is why we wanted to do the vigil, because we want to make a point that this is a problem,” she said. “Enough is enough, something needs to change.”

Villanueva supports RObD’s efforts to strengthen repeat offender bills, while bringing attention to stronger penalties for juvenile first offenders who commit violent crimes. “This is my battle,” she said Chavez welcomes her input.

“It’s not only repeat offenders, it’s also first-time offenders creating these violent crimes across the city,” she said, “because they know it’s just easy to get away with these crimes, there isn’t a lot of penalties they’re going to have to face. They don’t seem very afraid to get caught.” Added Villanueva, “It’s sad to see other families going through what (my family) has been going through,” referring to the uncertainty of justice for Isaiah.

She said she’s reaching out to everyone, including the Navajo Nation Human Rights office, for support. Two other youth were shot and injured during the party, Adelina Aragon and Samuel Garcia.
Reportedly, then 17-year-old Timothy Malek was also arrested as a shooter at the party. Grado’s defense attorney, Raul Lopez, said he had no comment for the Times except to say, “We are looking forward to going to trial, so we can get the truth in front of the jury.” The Bernalillo County district attorney’s office is prosecuting the case.