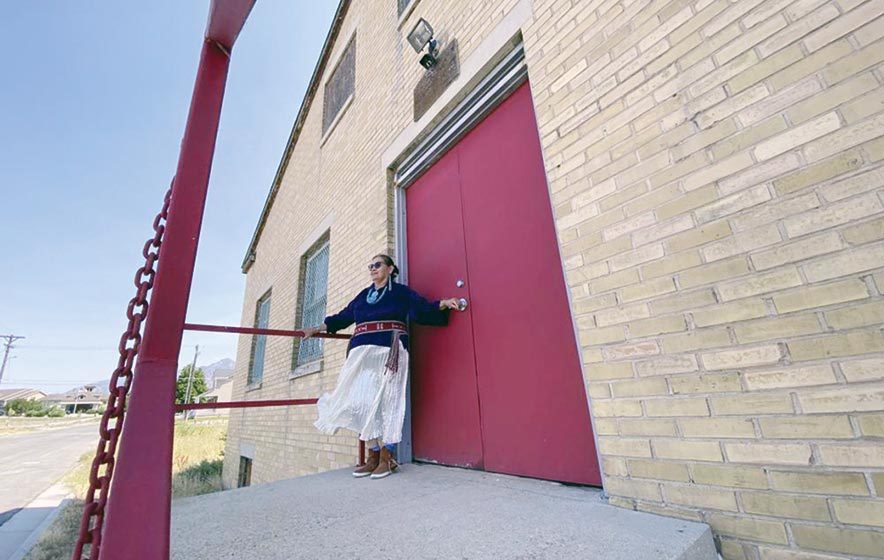 KUER via AP | Jon Reed
Former Intermountain Indian School student Lorina Antonio is shown outside one of the institution’s few remaining buildings on July 15 in Brigham City, Utah. The school closed in 1984 and Native activists in Utah are calling for its legacy to be re-examined along with other Native boarding schools throughout the country.

Not much is left of the Intermountain Indian School in Brigham City, Utah. The once-sprawling campus is now mostly barren fields of dying grass. A giant white letter “I” fades away on the nearby mountainside.

Just a few buildings remain. One sits empty and abandoned. Two others have been converted into an upscale furniture store, KUER reported.

But for Lorina Antonio, the memories are still clear. She first arrived in 1967 when she was 12 years old.

“First time when I showed up here, they had Greyhound buses lined up all the way around the campus,” she recalls, tracing the line with her finger. “They had 2,000 students that they were bringing in.”

On a hot, cloudless day this July, she was dressed in a traditional Navajo outfit with a purple blouse and turquoise jewelry. Back in 1967, she came with very little. She had two sets of clothes in a plastic bag. She knew no one, barely spoke English and was 400 miles from home.

To escape homesickness, Antonio said she threw herself into activities. She played sports and joined the student council. She became homecoming queen in 1974.

In all, she spent about a decade of her life at Intermountain. She said the school taught her personal responsibility and gave her opportunities she didn’t have back home.

Lots of students report experiences similar to Antonio’s. Intermountain alumni are active on Facebook groups and they hold reunions.

But for historian Farina King, a citizen of the Navajo Nation who is writing a book about the school, Intermountain remains part of the troubling history of native boarding schools in the U.S.

Many Americans are just learning about schools like Intermountain, following the recent discoveries of hundreds of Indigenous bodies buried in unmarked graves outside residential schools in Canada.

Similar schools existed throughout the U.S., and the U.S. Department of the Interior is now investigating the country’s boarding school system.

Navajo Nation President Jonathan Nez has called this an important step towards confronting the country’s discrimination of Native Americans.

Native advocates in Utah hope schools here will also be investigated, including Intermountain.

The Bureau of Indian Affairs opened Intermountain in 1950, transforming a former military hospital into what would become the largest Native boarding school in the world.

That was decades after other federally-run programs around the country had earned reputations for brutal practices, such as forcibly shaving student’s heads and physically and sexually abusing them.

While Intermountain was not as harsh, King says federal officials had the same goal in mind.

“They wanted to assimilate them, integrate them, and they wanted to cut off the ties (to their land),” King said. “I mean, this is in BIA records of how they designed this school.”

Intermountain grew out of a kind of bargain between Navajos and the federal government, King said.

Navajos had long been skeptical of government schools. But they were also facing a major economic depression following World War II — mostly because of earlier Federal policies according to King. They began to see these schools as the better of bad choices.

“It’s always a balance because Navajos have never given up their sovereignty, have always seen the significance of their peoplehood, culture, language,” she said. “But as a strategy of survival, they realize we need more schools for our children.”

So on a cold day in January 1950, 526 Navajo students arrived in Brigham City. Like Antonio, few spoke English. Some had reportedly never seen a shower before.

Girls, for example, tended to go into occupations like cleaning houses and boys trained in agriculture or as car mechanics.

By the early ’70s, a darker side began to emerge. In 1972, a student died by suicide in a Brigham City jail after being arrested for public intoxication. He was not the first.

The year before that, a group of students filed a lawsuit to shut the school down. They alleged administrators drugged students with Thoraznie to sedate them, that the school illegally segregated students and provided an inferior education.

The lawsuit was ultimately dismissed. The lead plaintiff declined to speak with KUER for this story. Former teacher Hal Reeder said the allegations weren’t true.

“I can think of one instance in all the time I was there that an employee laid hands on a kid in a violent way,” Reeder said. “There were skirmishes among the kids, especially when we had our famous riot,” he said. “But that was blown up.”

Shortly after the school started admitting students from other tribes in 1974, several riots broke out.

But Reeder said it was mostly a standoff between Navajo students and students from other tribes. And no one got seriously hurt. He said the police and surrounding community made a bigger deal of it than it was.

And that, to him, was always the bigger problem.

“People are racist,” he said. “And a lot of people in town weren’t necessarily nice or friendly to the Indian kids.”

Reeder taught at Intermountain for close to 20 years, until it closed in 1984. He said teachers cared about the students and did their best to make them feel comfortable.

But he said many students came from difficult backgrounds and he recognized that it could be difficult for some to be so far from home in a strange, new culture.

He remembered escorting students back to the reservation on the bus at the end of the year. When they were almost home, the students began taking off their school clothes and changing into their “Navajo clothes.” He said the students seemed to be afraid their friends and family would think they had been white-washed.

“I think (the students had) an ambivalence about, ‘what will make me happy here,’” he said. “I think they came with a lot of Navajo culture. And they tried to adapt the best they could.”

Unlike earlier boarding schools, students at Intermountain could express themselves and their culture. They had bonfires and traditional dances, made fry bread in the kitchen and painted native artwork on their dorm walls.

When BIA officials planned on shutting down the school due to limited funding and declining enrollment, students rallied to keep it open. They organized a 24-mile run from Brigham City to the Federal Building in Ogden to speak with Utah’s federal delegates, including Republican Sen. Orrin Hatch and Republican Rep. James Hansen. None of them showed up.

“I think Intermountain offers a lot more than many of the boarding schools, the ones I’ve been to by a far shot,” said student Darrell Bradley in a video of the event.

Antonio said she saw students struggle with staying connected to their culture while attending the school. But it wasn’t something she had a problem with.

She still speaks Navajo. But she never moved back to the reservation. She went to Salt Lake and worked in construction.

“What happened in Canada is very sad, but I would never put that for Intermountain,” she said. “We were away from home. We were away from our family, but we were brought here to learn an education and learn about ourself. That’s the way I look at it.”

Antonio is helping to organize the next reunion in September and trying to get a group together to repaint the letter “I” on the side of the mountain.

Even though most of the school is now gone, she said she wants people to know it existed and remember the students who went there.