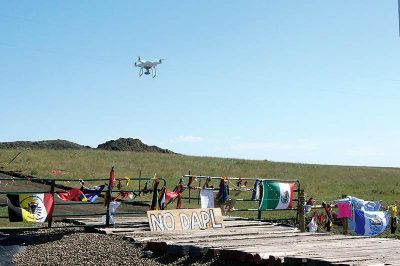 During his first address to the U.N. Tuesday, President Joe Biden attempted to separate his administration from Trump’s failures on climate action by speaking at length about the need to tackle the climate crisis.

President Biden declared to the General Assembly that “we will lead on all the greatest challenges of our time from COVID to climate change” and noting that inaction would mean “we will all suffer the consequences of our failure.”

Biden’s remarks come shortly after White House Press Secretary Jen Psaki claimed Biden has taken “every step he can take within his control, to move the climate agenda forward.”

The Indigenous Environmental Network reports that while major steps are happening, as demonstrated by stopping the Keystone XL pipeline, the president has yet to act to stop just as risky pipelines that were rubber-stamped by the Trump administration.

For months, Indigenous, environmental, and allied activists have been calling on the administration to live up to its climate and justice commitments and cancel these and other Trump pipelines, the network said, climate action that is well within the administration’s authority and Congress does not need to act.

“President Biden is attempting to turn the page from the Trump administration, but until he uses his authority to stop all Trump-era fossil fuel projects, our communities will continue to raise the red flag,” Braun said.

LONG BEACH, Calif. – A settlement was reached in a lawsuit against California State University-Long Beach, which provides protection for the Puvungna, a listed historical and cultural site on the college’s campus.

The site is sacred to southern California tribal groups.

The lawsuit was filed by the Juaneño Band of Mission Indians, Acjachemen Nation-Belardes and the California Cultural Resources Preservation Alliance Inc.

The settlement requires the university to record a declaration document that prohibits the university from developing or damaging the land and allows tribal groups to continue using it for traditional activities.

The document “runs with the land,” meaning that it binds the university and any future owners of the land to follow its restrictions.

The settlement also requires CSU to establish a conservation easement over the site, which would shift care of the land to a manager agreed upon by the settlement parties.

Matias Belardes, chairman of the Juaneñi Band, said, “This agreement honors the land and it honors the people who have been fighting to protect Puvungna for 30 years.”

The settlement closes a decades-long conflict between the college and tribal groups. The plaintiffs argued that the university acted improperly in the fall of 2019 when it dumped 6,400 cubic yards of construction dirt and debris on Puvungna.

The 22-acre parcel is the most significant remaining undeveloped parcel of sacred land for tribal groups in southern California.

Joyce Stanfield Perry, tribal manager and cultural resource director, said, “Puvungna holds the graves of our ancestors and serves as a place of worship and celebration for the tribal groups across southern California.

“We look forward to working with the university,” she said, “to restore Puvungna and protect this land for future generations.”

WASHINGTON – The U.S. Department of Justice selected an additional 12 federally recognized tribes to participate in the expansion of the Tribal Access Program for National Crime Information.

The U.S. DOJ reports that the program provides tribes with access to national crime information systems, including those maintained by the FBI Criminal Justice Information Services Division and the states.

The funds will help to identify and evaluate economic opportunities for tribal communities.

Grants are awarded on the basis of a proposal’s potential to create jobs for tribal members and stimulate economies in Native American communities.