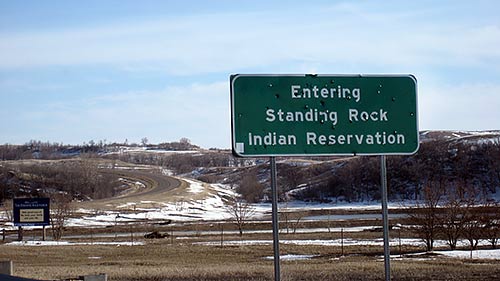 Navajo Nation President Russell Begaye issued a letter to President Barack Obama Wednesday asking him to intervene on behalf of the Standing Rock Sioux Tribe, according to a press release from the Office of the President and Vice President.

“The extent of military force and the violent repercussions suffered by residents and demonstrators is uncalled for and excessive, to say the least,” said Begaye. “We are calling upon President Obama to take expedient action on this issue.”

The press release said that law enforcement officials barricaded the highway, which endangered the lives of residents and obstructed emergency services from accessing it.

The Begaye administration visited the protest site on Aug. 30 to express support of the Sioux tribe’s effort to fight the construction of the pipeline. Begaye and Vice President Jonathan Nez met with Standing Rock Sioux Chairman David Archambault II. Begaye and Nez placed the Navajo Nation flag at the Sacred Stone Camp, which is located next to the Missouri River north of Cannonball.

Begaye stated in his press release that the Obama administration could not sit back as law enforcement continued using excessive force on protestors.

However, according to a statement by Lt. Tom Iverson with the North Dakota Highway Patrol, the demonstration was anything but peaceful when law enforcement officers witnessed three protestors, using a barricade of plywood wrapped in a blue tarp for cover, carrying multiple metallic cylindrical objects towards the burned vehicles that barricaded the highway.

“The subjects were given opportunities to retreat back, but it became obvious that they were tampering with the vehicle or planting a device,” said Iverson. “Their strange mannerisms led law enforcement to believe they were there for a purpose with a calculated effort to either cause harm or breach the line.”

Police shot “less than lethal bean bags and sponge rounds” at the three individuals when they failed to listen to repeated orders from law enforcement to come out from behind the barricade, Iverson stated in his Nov. 21 press release.

Iverson continued in his statement that the metallic cylinder was rolled to the burned vehicle where it exploded early Monday morning.

“Several protestors ran to the area, pulled a female from under the burned vehicle, and fled the scene,” Iverson said, suggesting the explosion may have caused an injury to Sophia Walinsky.

Social media exploded on Monday with images of a woman who appeared to have been severely injured at the DAPL protest site. Walinsky was reportedly identified as being the severely injured woman in the photograph.

Her father, Wayne Walinsky, spoke at a press conference Tuesday and said doctors at the Hennepin County Medical Center in Minneapolis, Minnesota, where she was transported, found “grenade shrapnel” in her arm during surgery.

A Go Fund Me account has been sent up for Walinsky where more than $316,000 has been donated so far. The money will go towards her medical expenses.

As police and protestors continued to dispute each other’s claims about what happened at the Dakota Access Pipeline protest early Monday morning, Begaye said “an overzealous military police force” and its use of “chemical warfare” against the protesters was excessive.

“The Morton County Sheriff’s Department use of water cannons to spray protesters with mace-laced water is not only unjust, but a reflection of the racial tensions boiling over throughout the United States,” Vice President Jonathan Nez said.

“People are going to die if no action is taken,” Nez said in the press release. “It’s imperative that we do something before the Trump administration takes office.”