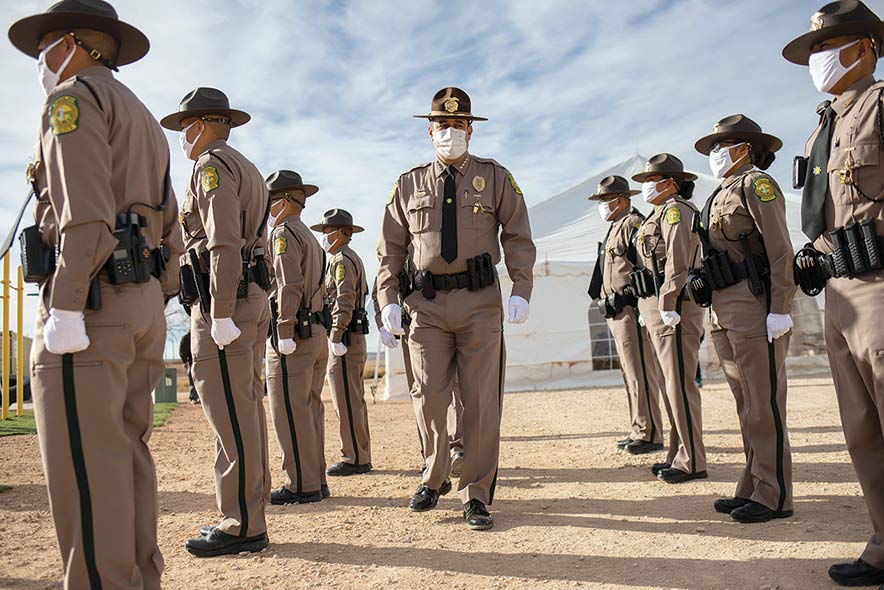 Navajo Nation Police Chief Phillip Francisco said he’s leaving his position at the end of the 2021, citing his investment in the New Mexico state retirement system and the five or so years he needs to retire with full benefits.

Francisco, 45, also cited frustration and lack of support from Navajo Nation Council delegates. And the bureaucracy within the Diné government, especially the Siláojí ‘Oonish Biniiyé Bits’á’nilígíí, which he says hinders Navajo PD’s ability to move forward and improve.

Now he’s going to become police chief at a much-smaller police department in Naabi’ání where he grew up. Francisco starts his new role at the Bloomfield Police Department on Jan. 4, 2022.

Francisco took over the Navajo Nation Police on Aug. 22, 2016, after the position had been vacant for nearly eight years, with various officers temporarily at the helm.

Navajo PD onboarded Francisco after his work with the Farmington and the Aztec PDs, and at the San Juan County Sheriff’s Department.

During his swearing-in ceremony at the Navajo Nation Museum, Francisco said there had been many changes in communication that impact how law enforcement is perceived.

“The expectations of officers (have) increased significantly,” he said at the time. “The Navajo Nation faces unique challenges beyond going nearly a decade without leadership.”

He said he would improve safety across the Nation and secure the protection of culture.

“Because we don’t have enough officers on the ground, calls must be prioritized,” Francisco said. “In many cases, there are more officers out there serving smaller communities than the number of officers serving the entire Navajo Nation.”

He ended that day saying he is honored to accept the position as Navajo Police chief and would serve Diné Bikéyah and the neighboring communities with honor and dignity.

Over the last five years, Francisco set goals and fulfilled much of them with a staff of about 200, less than half of what the Navajo PD needs to sufficiently cover the Nation. Navajo PD needs about 775 officers to meet community demands.

President Jonathan Nez credited Francisco with re-establishing the Navajo Police Academy in Ch’ínílį and created a criterion called Peace Officer Standards and Training for the academy. This move helped boost recruitment for the force.

He also led the push to increase officer salaries, which Diné lawmakers say helps with recruitment and retention.

Among a list of other accomplishments, Francisco worked to improve 911 dispatch services, obtained body cameras for officers, brought in five K-9s, and created the positions of deputy chief and public information officer.

Francisco will always be a Diné warrior who served the Diné on the frontlines with great honor and commitment, said Nez.

“Under his leadership, the Navajo Police Department experienced vast improvements,” Nez said. “My words are not enough to thank him for his contributions and for going above and beyond to overcome challenges to make our communities safer.”

Vice President Lizer added that Francisco was the answer to prayers in many aspects.

“There was so much progress and accomplishments that were made under his leadership,” Lizer said. “We thank him, and his family and we pray for his continued success with the Bloomfield Police Department.”

Daryl Noon, who had been a deputy chief under Francisco, will take over as the Navajo Nation Police chief.