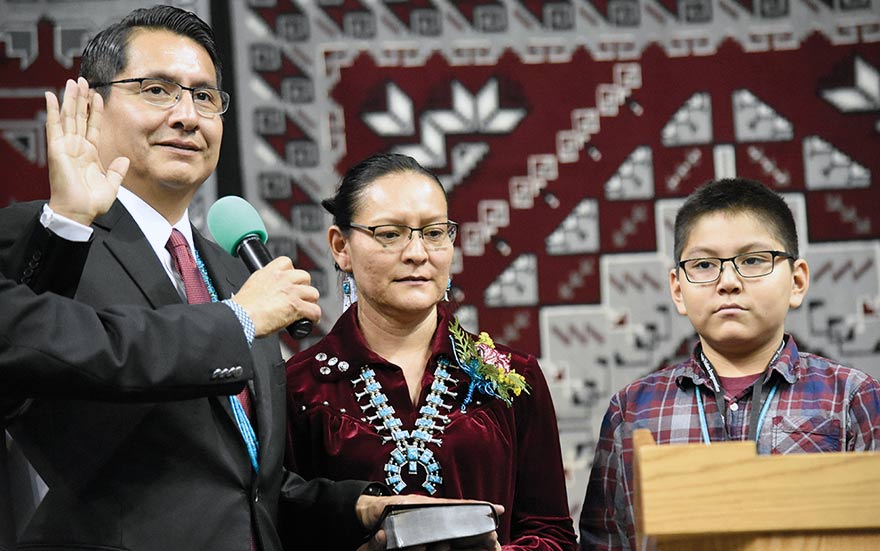 Navajo Times | Ravonelle Yazzie
Jonathan Nez raises his right hand as he is sworn in as the new Navajo Nation president at the inauguration on Jan. 15 in Fort Defiance.

Surrounded by eight portraits that were borrowed from the stone walls of Shonto Chapter House, Jonathan Michael Nez was inaugurated the ninth president of the Navajo Nation Tuesday morning, ushering in an era that he said would shatter the established order and bring change.

“The Navajo people are tired of the same old rhetoric, the same old work that’s happening not (only) here in Window Rock, but (also) across the Navajo Nation,” the 43-year-old said in his inaugural address he delivered mostly in Navajo.

“The change we’re talking about is … not (being) fearful. Let’s grasp the change and move forward – all of us as a Navajo Nation,” he said.

Nez, who is the youngest person elected president, says his teachings and knowledge come from his late grandfather, Henry T. Donald, who served as Council delegate for Shonto from 1959 to 1963, and from his late grandmother, Mae Donald.

Nez was only a year old when Henry died, but he learned his teachings through the Shonto community.

“It puts a strength in you,” Nez said about Henry’s teachings. “I remember (his) teachings and that’s what sent me off to school.”

In front of 3,500 people inside the Bee Hóldzil Fighting Scouts Event Center in Tséhootsooí, Nez raised his right hand and repeated the oath of office administered by Chief Justice JoAnn B. Jayne.

Nez’s left hand was placed on a Bible that his wife, Phefelia Herbert-Nez, held with both hands. Afterwards, he received a standing ovation with cheers and whistles.

Nez’s parents, John and Mabel Nez, beamed from ear to ear as they watched their son and his family, including sons Christopher and Alexander, walk up to the platform.

John and Mabel also have two adult daughters, Helen and Nancy, and a son who had passed on.

The Nez family left their home in Shonto on Tuesday at 4 a.m. to be at the event center by 7 a.m. despite a snowstorm in northwestern Navajo.

The people here may have been the happiest as a man from Western Navajo took over the Navajo Nation’s highest office. Former chairman Peter MacDonald Sr. and former chairman and president Peterson Zah watched from the VIP section. Former President Russell Begaye did not show.

It’s been 20 years since a person from Western Navajo became president with the last being Kelsey Begaye from Kaibeto, Arizona, who served from January 1999 to January 2003.

Nez said those portraits followed him throughout his life to where he is today. Nez also proudly acknowledged his people and the leaders from Western and Utah Navajo who had traveled hundreds of miles to attend the inauguration.

“I see a lot of my relatives and the leadership,” Nez said. “I’ve learned a lot from you. I see my people from Ts’ahbiikin, Naatsis’áán, Ooljéé’tó – I’ve learned so much from you. It’s because of your teachings and prayers, I’m here.”

Nez says his people rom these areas constantly tell him, “Shiyázhí, she’awéé’, bííníghah,” meaning, “My child, you can do this, you can lead the Nation.”

“These people are my people, they told me I can do this,” Nez said. “It’s because of you.”

In the middle of his speech, Nez acknowledged and recognized Diné sign language interpreters Tasha Terry and Kathy Terry, both from Dzilyíjiin. A Toh Dine’é interpreter also helped the women.

“We want to bring everyone back together once again,” Nez said, “and that also means those who are hard of hearing and (those) who can’t speak well.”

Nez said he and Lizer’s campaign was defined by unity, hope, and resilience, and said from day one it was about the Diné people.

Nez said he will lead the Nation and help the Diné people relearn the old traditional teachings, the hashkééjí teachings.

“Many of us grew up (around) sheep and (sheepherding),” Nez said. “The things we learned out there when the mirror was being shined at us to come home for lunch, those were the fun days.

“But we can bring that back into the 21st Century,” he said. “I envision one day to see a school district (that situates) the young at grandma’s house. Maybe it’s time for us to have year around education (like) we (adults) had when we were growing up.”

Nez said his constituents believed in him and Lizer to lead the Nation, saying they believe in change, which he says can be good or bad.

“Let’s work together, which was the slogan of our campaign,” he added in Navajo. “This is what we want and working together is the only way this administration will work. Thank you for your prayers and words of encouragement, and the tough love.”

In an interview with the Navajo Times, Nez said he is excited for the Nez-Lizer administration to begin working.

Phefelia said when traveling with her husband throughout his term as vice president, she realized that the foundations of the Nation are built on four important concepts: love, compassion, faith, and family.

“Love is selfless, and it has the power to change everything for the better,” said Phefelia, who wore moccasins, a traditional outfit and adorned in turquoise.

Her outfit was made by her aunt, Ruby Benally. Her parents, David and Julia Herbert, along with two of her nine adult siblings, also traveled here from Dzil Nitsaa.

“Love does conquer all,” said Phefelia, the first lady who home schools her two sons. “We also have the capacity to build love for one another. The Navajo Nation constantly endures hardships, ridicule, and adversities, but we are still here. Our faith has allowed us to survive.”

She said it is because of the forefathers and the grandparents who had endured hardships and because of their prayers the young people today have the ability to follow their dreams and be anything they want to be.

“They did not give up their dreams for us to be safe,” Phefelia said. “(They) made too many sacrifices for you to stop. This is our time to leave our mark in history. The way of prayer is truly the way of life. Let us give ourselves to prayer.”

Jonathan Nez added that he’s excited to bring young, experienced professionals home to the Nation to work under his administration.

The inauguration was a mix of traditional Navajo and Christian prayers as hataalii Eric Willie from Kinlitso, New Mexico, and Nez’s and Lizer’s pastors LeRoy Thinn of White Post Covenant Church in Shonto and Robert Tso of Victory Life Church in Shiprock, blessed the men and their families.

Tso said the new leaders are in office now through both traditional and Christian prayers and told the audience they had put kings in leadership.

“You may say, ‘Well, they don’t look like kings,’ but in the spiritual and the supernatural Diné way, they are in authority over us,” Tso said. “It is predestined. This is not by accident, but by faith. God has good plans for the largest tribe in the (country).”

“They’re not going to make decisions on their own anymore,” Tso said about the administration. “They’re going to seek the Creator and his advice, the holy spirit and his advice.”