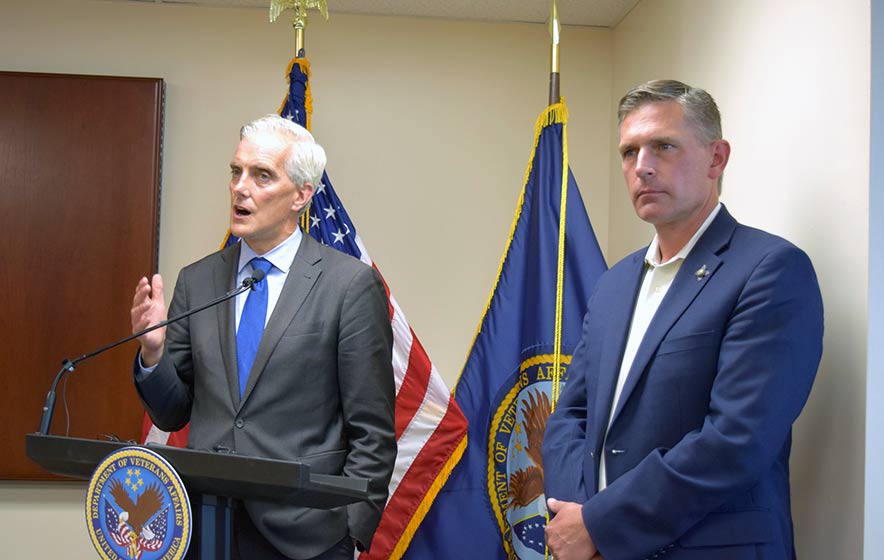 By Diane Schmidt
Special to the Times

They made the announcement on Monday at a press conference at the Raymond G. Murphy VA Medical Center.

Because of the rural nature of New Mexico, where veterans must drive for hours to reach a clinic, Heinrich and a bipartisan group of senators fought successfully to defeat the closure recommendation that had been made under the previous administration’s VA Asset and Infrastructure Review Commission.

Heinrich announced at the press conference that the commission “will not be seated and will not be moving forward,” so the process to shutter those clinics was completely stopped.

He added that the four clinics “are looking very good well into the future, which I think is a huge, huge, big deal for veterans in rural New Mexico.”

McDonough said there is still a need to modernize and upgrade clinics and “going forward it is a fundamental priority of President Biden to ensure that our veterans can get access to facilities built in for them in the 21st century, not in the 20th century.”

When asked what they see as the biggest obstacles to care for Native veterans, McDonough replied, “Excellent question. I think, right now there’s two.”

He said the biggest challenges are: one, the Covid pandemic, which slowed care; and, second, the need for more trained health-care workers.

He encouraged all veterans who may have deferred care to seek care now and that, “We are open. We are here for you.”

With regard to communication with the Indian Health Service, McDonough said, “I think there are things that that we need to do better with IHS, there’s no question about that.

“But one of the things we’re really proud of is the relationship we have with IHS,” he said, “to the support we provide to one another is very often the case.

“Even right here in the broader Albuquerque region,” he said, “where we are right now providing VA health care professionals, VA administrative professionals to deploy into IHS facilities to supplement their capacity.

“So, yes, we should be better about communication,” he said. “But we should build on the things that we’re doing.”

Heinrich added, “I would just say that coordination, as a result of the pandemic in the last two years, has been unprecedented. The whole fourth mission model of the VA, I think, speaks to that.

“And we need to learn from that,” he said. “Figure out where those friction points are, and improve moving forward. But I think we have a lot to learn from, because of the heightened coordination in the last couple of years.”

McDonough said there is a shortage of medical personnel across the country and an acute shortage in mental health. And, exacerbating that, within the VA there is also a shortage of human resource professionals that has slowed hiring.

He said they are looking for innovative ways to combat the situation.

He said, “I was thrilled to hear about here in Albuquerque, we’re expanding by about 50 people our nurse residency program, where we’re hiring young nurses out of the University of New Mexico, New Mexico State University, and other schools in the state, nurses who can come to work here and do different shifts with nurse proctors so that they can learn at the elbow of those experienced nurses and then decide where they want to specialize in their care.”

New Mexico is increasing hiring incentives to attract more nurses to the state and has also recently expanded eligibility for free college tuition to include adult learners, not just those right out of high school, to increase the number of college-educated New Mexicans.

Heinrich said a bill for hazardous air exposure finally passed the Senate June 16 and is now moving (again) through the House and is headed for President Biden’s signature.

McDonough has said the bill will bring coverage to 3.5 million veterans, military personnel were affected by burn pit and hazardous air exposure in overseas war deployments going back to 1990, including Iraq, Afghanistan, the Persian Gulf, Uzbekistan, and more.

The bill also expands coverage to those exposed to Agent Orange in Thailand, Guam and five other areas.

New benefits will also cover military families affected by toxic water pollution at Camp LeJeune Marine Base over many years.

The bill will be the largest expansion of VA benefits in years, estimated to cost more than $300 billion over the next decade.

As earlier reported by Reuters, Sen. Chuck Schumer “noted that around 80% of disability claims related to burn pits have been rejected by the Veterans Administration.

“The issue is personal for President Joe Biden,” he said, “who believes his late son Beau’s fatal brain cancer could have been caused by such a pit from when he served in Iraq.”

On Tuesday, McDonough and Heinrich headed to Gallup, where they announced that the U.S. Department of Veterans Affairs has recognized the Navajo Veterans Administration as an official organization that can help veterans file claims for VA compensation that they’ve earned.