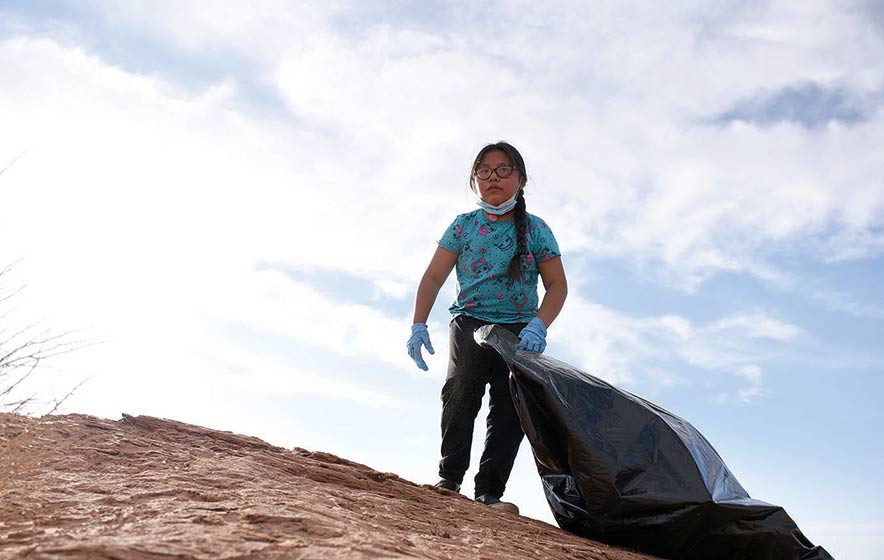 Navajo Times | Krista Allen
Eliza Dodson, 10, pulls a large contractor bag across an area she scoured for garbage during a litter-picking drive on a Saturday morning north of Tuba City.

Eliza Dodson carried a contractor bag of garbage half her size alongside Route 6220, Three Tanks Road, where she and her family picked trash on a Saturday morning.

Eliza, 10, said she’s angry that there are people who harm the planet, although some try to treat it well.

“I like the Earth,” said the 10-year-old as she scoured hills. “I’m mad that they’re doing it and kind of sad.

“There’s a bunch of trash around the Earth,” she said. “It hurts it even more.”

Eliza’s mother, Charlene Dodson, said she and her family have lived in Tuba City for many years and are familiar with a certain amount of wind-blown trash.

While Charlene and her family have been frustrated about the debris that shows up around their home, she said this year has been the worst it’s ever been because of the unusual amount of wind this spring.

“We try to pick up trash as much as we can,” Carlene said. “But the winds up here are really bad.”

Charlene and her children were volunteers, alongside the chapter’s Planning and Zoning Committee, who spent one morning picking trash in a litter-picking drive – highlighting the vast quantity of trash dumped across Diné Bikéyah – in north Tuba City.

Committee members said picking garbage is just a Band-Aid and that it isn’t fixing the trash problem in the Navajo Nation. The members are calling for action on the environment.

Tónaneesdizí resident Ruby Bracker said it’s likely that some locals are dumping garbage in areas where trash has accumulated illegally.

“And I’m glad we’re addressing this,” she said.

There are many reasons people illegally dump. Ruby said she believes some people do it because they don’t have education on available disposal options even though there is no charge for using the transfer station service in the community.

“It all starts within your home,” Ruby said.

She said her elders taught her early on that land stewardship starts within the hooghan.

“And sweep out your home even if it’s a dirt floor – we did that,” she said. “Those are the teachings that were brought forth for a long time.”

Ruby said some of the things she picked up during the litter-picking drive tell stories and have past teachings.

“My mom always told us (children at that time) about these things,” Ruby said. “She said a lot of things would change, even discipline.

“Some people have nice homesteads, and you look at those homes, you’ll find it (teachings) there,” she explained. “We’re digging up some of these things, and it’s generational. We didn’t have some of these resources (such as solid waste disposal) back then.”

Ruby said people threw their trash wherever was most convenient in the old days. Some dug deep holes to hide refuse, which they would then cover with dirt. And some would burn their garbage in large dumps.

“But we weren’t educated, and the years went by,” Ruby added.

“If you go further up north, you’ll see people dropping off their big-screen TVs, drywall partitions, and stuff like that,” Davey said. “When Navajo people say, ‘hózhó’ they need to clean up their yards and look around.

“It’s like when people drive by, they just throw their trash out,” he said. “Where the heck were you raised? And people don’t want to get involved (in community cleanup). If people – everybody – could take some responsibility, we wouldn’t have to put up with stuff like this.”

Davey said it takes responsibility and accountability for solid waste, meaning taking waste and recycling to collection services contracted by the chapter.

“I don’t mind picking up trash, but if I’m picking up someone else’s trash and I’m not getting paid, I’m going to say something about it,” Davey said. “And if you’re going to go up north (northwestern Navajo) and party, please pick up your trash. T’áá shǫǫdí!” 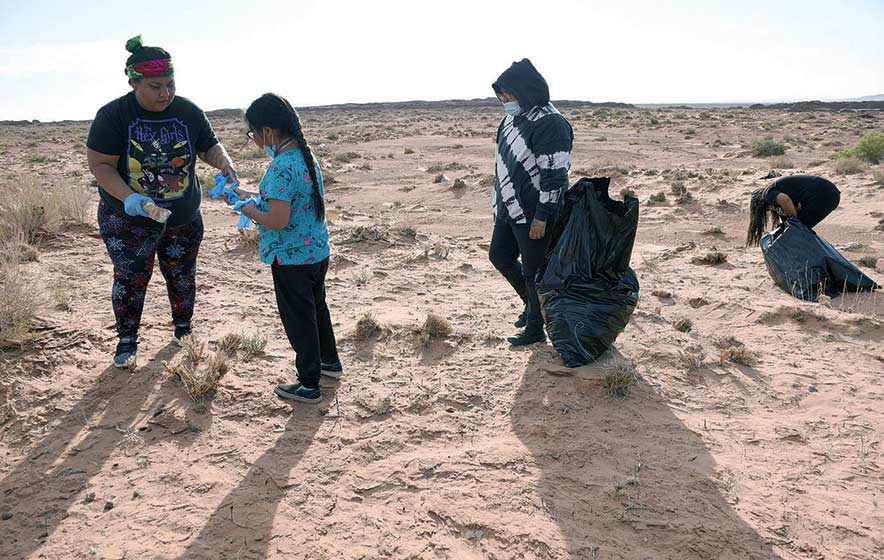 Navajo Times | Krista Allen
Charlene Dodson and her children, left to right, Eliza, 10, and Kyrae, 13, and niece Kaelan Tso, 11, line up to change their gloves as they participate in a litter-picking drive on a Saturday morning north of Tuba City.

North Tuba City is known for its ceremonial grounds, but now the area is full of litter.

“I came up here, and it was really bad, so I brought it up at our committee meeting, and we put this on the agenda,” said Velma Maloney-Begaye, the committee’s president.

Maloney-Begaye said north Tuba City’s been a dumpsite for about 70 years.

“Even though we have a free transfer station, people still come up here and dump their trash,” she said. “There are a lot of carcasses of animals.”

She added that the committee is coming up with ways to curb litter in the community. It is launching a cleanup initiative that its members and chapter officials will lead to motivate residents to help clean up Tuba City at least once a month.

“Part of this is just being out there and being visible and doing something in the community,” Bowen said, “and hopefully, we’re going to encourage other people to help.

“Just a reminder to the (residents) that this is your community,” he said. “We’re thankful and grateful, even if you clean up around your house – it’s a start. There are a lot of people that just need to be encouraged to use the (transfer station) that we have.”

Chapter planner Nelson Cody Jr. said he’d like the community to understand that the chapter officials are trying to take care of the land.

“We’re responsible for it as a chapter, having that stewardship,” Cody said. “(North Tuba City) isn’t meant for an industrial site, which is a solid waste collection area, and cleaning it up signifies this isn’t an industrial area.

“This isn’t a trash dump,” he said. “We will need to put signs up here that read, ‘Please dump at the transfer station.’”

Cody added that the chapter has a vision – the community’s prosperity – and a mission: to support and promote the local economy and education and improve residents’ wellbeing and quality of life.

And picking up garbage means preparing land for public building and economic development.