Object falls from sky near Dennehotso 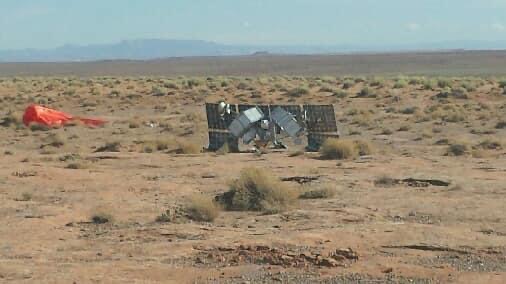 Courtesy photo | Nathaniel Brown
This object crashed to the ground near Dennehotso recently.

A piece of debris, or space junk, dropped out of the sky and landed between Dennehotso and Rock Point on Wednesday, according to Council Delegate Nathaniel Brown.

Brown posted on Facebook Nov. 18 that Dennehotso Chapter officials reported to the Navajo Police Department that an object landed about 1,200 from his house while he was away in Tónaneesdizí.

The object appeared to have large solar panels with an orange parachute.

Dennehotso Chapter Vice President Tully Begay told The Arizona Republic that he received calls from relatives saying they witnessed the crash and captured it on photo and on video around 1 p.m. that day.

The Navajo Police Department confirmed officers responded to the area after receiving reports about the object.

Tsosie said “the satellite material” was released to employees with Colorado-based Polar Field and there were no injuries nor property damage, and the cause of the crash is unknown.

Brown, who represents Chilchinbeto, Dennehotso, and Tódinéeshzhee’, was suspicious of the incident and asked if the federal government is keeping the Navajo Nation under surveillance.

“Why?” Brown asked. “There’s a lot of unanswered questions and incidents like these just fuel our distrust in the federal government. But we as (Navajo Nation) Council leadership will do everything we can to protect our people.”