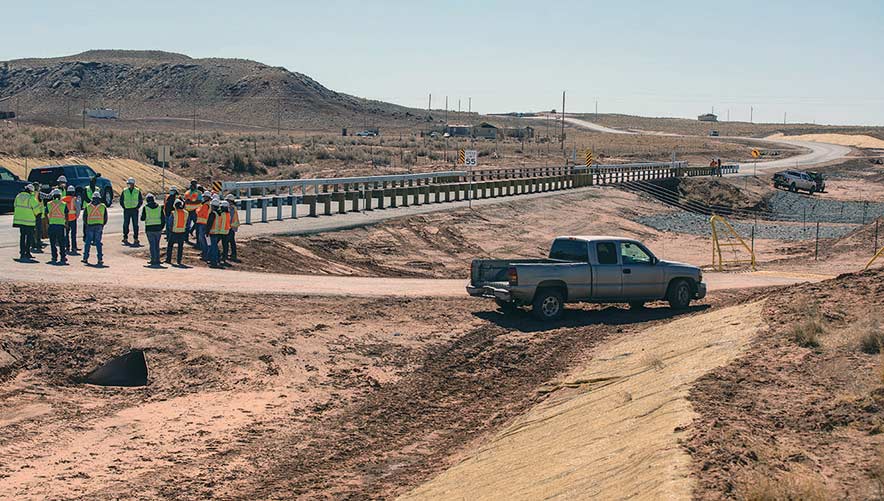 Navajo Times | Sharon Chischilly
Officials tour the area where the new paved road begins between Chinle and Nazlini to give the project a final inspection.

Jed Roanhorse from Chinle remembers when Navajo Route 27 was a dirt road when he was growing up. But after more than two years, the engineer for Navajo Engineering and Construction Authority stood proudly on the newly paved road he had a hand in building.

On Tuesday, Roanhorse, along with officials from the Navajo Division of Transportation, NECA, Wilson & Company Engineering and the Navajo Region Bureau of Indian Affairs completed the final inspection of the road that connects Nazlii and Chinle.

“I grew up in Chinle,” said Roanhorse. “It’s good to come home…the engineering field came full circle for me on this job. It’s an honor and a privilege to do this for the community that I grew up in.”

In 2018, the project to pave 10.86 miles began. It also included paving a section of N105, grade, drain, signage, crosswalks and construction of a roundabout at the intersection of N27 and N7 in Chinle, according to NDOT.

NECA General Manager Brett Grubbs noted that the project wouldn’t have worked without the complete effort of all partners involved.

“NECA, Navajo DOT, Wilson & Company and the local communities all worked together to connect these communities with this road,” stated Grubbs.

“Hats off to the men and women who worked through the pandemic,” he said. “We had to work together, very closely as a team, to accomplish such a monumental task.”

Although the pandemic brought Navajo Nation operations to to a halt, NDOT and NECA continued to work on this and other projects. DOT Division Director Garret Silversmith said it took a great deal of coordination to maintain progress on this project throughout the pandemic.

“A lot of credit for this project goes to the workers involved,” Silversmith said. “We thank all the contractors and subcontractors for their hard work.

“The BIA has put countless hours of time into engineering this project,” he said. “We thank the leadership of the Navajo Nation, former Council delegates and chapter officials. Some of those who advocated for this project have passed away and are not here to enjoy the fruits of their labor.”

Silversmith and some of his crew helped with the distribution of food and supplies to chapters, along with executive branch workers, during the pandemic.

NDOT has also helped the Navajo Police with COVID-19 checkpoints throughout various communities.

“For that, I’m thankful,” Silversmith said. “This project has been blessed from the beginning.”

Nearly a year into the pandemic, Roanhorse reflected on how the pandemic and the fear of contracting the virus felt like while continuing with the road project.

“This was all brand new at the time,” said Roanhorse. “People were scared and real concerned. Our employees were afraid at the time.

“We practiced social distancing,” he said, “we cleaned our office. We did everything we possibly could to keep from getting sick.”

Chinle Chapter Vice President Shawna Claw was appreciative of the partnership and stated school children that travel on N27 will no longer have to endure having to travel on a bad road.

“It’s a road of hope,” stated Claw. “It will provide safety and enhance economic development for the Chinle and Nazlini Chapters and the surrounding communities.”