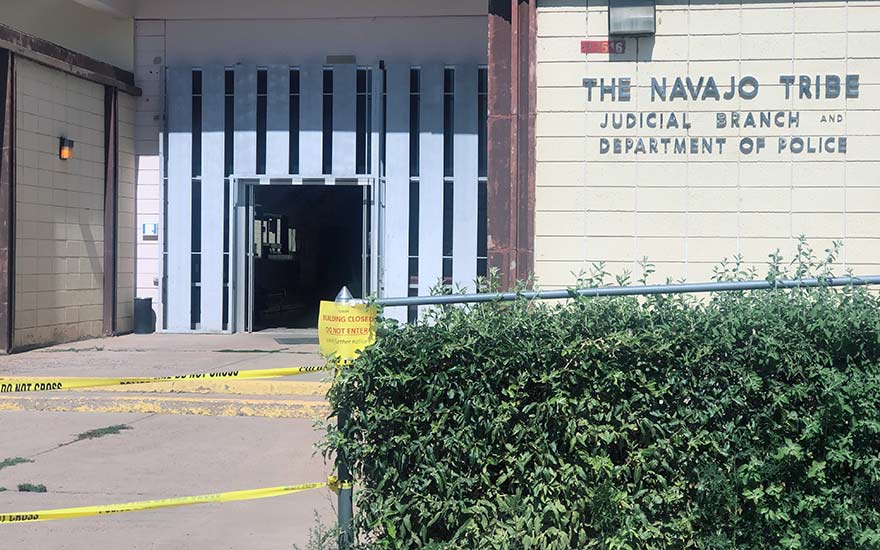 Navajo Times | Arlyssa Becenti
The Navajo Nation Police headquarters, which also houses the Window Rock Jail, has been closed due to an electrical failure. Jail inmates have been transferred to Chinle.

It has been an unlucky summer for the police building, from having to deal with limited to no cooling system for the staff, to Monday morning’s electrical failure when a smoking boiler caused a transformer to shut down.

Chief Phillip Francisco released his staff for the day and closed up shop until these problems can be fixed. The building issues have also caused the Information Management Section building to close, as well as Corrections. Inmates at the jail will be transferred to Chinle jail.

“Corrections is going to work on a remote booking area here,” explained Francisco. “For new arrests, officers are going to arrest them, bring them here to Corrections, where they’ll book them outside, put them in a van and take them to Chinle.”

Since the transformer’s job is to protect the building from an power surge, Francisco said the old component more than likely couldn’t handle the electrical capacity the station is using today.

He said the air conditioning in the building has been broken for most of the summer and it will cost upwards to $100,000 to fix. Because of this the staff has been bringing in fans that he said could have blown the fuse.

“These are old buildings and they don’t have the capacity for a lot of electronic equipment we have in there,” said Francisco.

Window Rock Police Headquarters, built in the early 1960s, has other issues such as asbestos and high carbon monoxide readings. Last year the district court, which had occupied the second floor of the building, relocated because of safety concerns with the aging structure.

The Shiprock Police District has also been closed due to building health and safety issues, including the presence of mold, lead, and asbestos.

“Leaders are well aware of these issues,” said Francisco.