Red Cross volunteers from Taylor and Flagstaff, Arizona, were in Chinle this week assessing flood damage from the rain-swollen Chinle Wash. 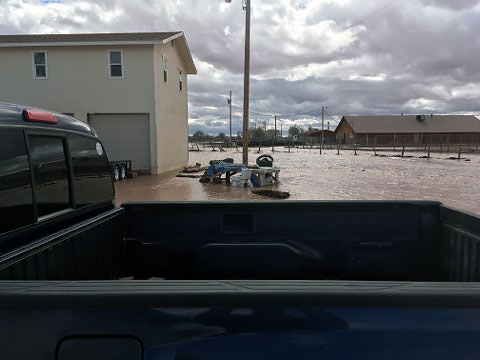 Floodwaters surround a home near Canyon Family Church in Chinle this week.

Red Cross disaster team member David Thompson said approximately 90 percent of homes damaged by flooding this week and on Feb. 13 qualified as “major” damage, meaning the foundations were chipped or cracked, or, in the case of a mobile home, the insulation had become saturated.

“There was one home where the walls were buckled out that was in danger of collapsing,” he said. “We advised the family to get out, but they’re still in there.”

Thompson said so far eight families comprising a total of about 30 individuals have qualified for assistance from the Red Cross.

Veterans who don’t qualify may be able to get other kinds of assistance from the Veterans Administration, said Red Cross volunteer Brenda Cicero.

At a Friday night meeting for flood victims, Chinle Chapter Manager Walton Yazzie said chapter employees and AmeriCorps volunteers have been filling sandbags and evacuating people, usually with their own vehicles, all week, but the chapter is out of money will go back to a 40-hour work week starting Monday.

“We’ve written to President (Jonathan) Nez and all we heard back is that they can’t keep the EOC (emergency operations center) open for one chapter,” Yazzie said. “We were told NECA was going to come in with a bulldozer, we were told NDOT would help. They never showed up … Apache County helped some but they were concerned they weren’t supposed to be spending their money that way. We’re basically on our own.”

In fact, he said, the president’s office ordered the chapter employees working overtime to “stand down” because the emergency was officially over.

Yazzie also expressed frustration with Council Delegate Eugene Tso and the chapter officials, saying that other than Secretary/Treasurer Cynthia Hunter, they had been AWOL when it came to managing relief efforts. None of the chapter officials was at the Friday meeting, although Yazzie said Hunter had come by earlier and he had advised her to go home because she had been working on the flood relief effort all week.

He also expressed disappointment with some of the affected families.

“I would say in 90 percent of the houses we went to, there were at least two able-bodied males sitting on the couch watching TV,” he said. “When we asked them to help haul sand or fill sandbags, they said they would only do it if they got paid. I told them, ‘This is your own house!’”

As soon as volunteers would build a wall of sandbags to contain the rushing wash, Yazzie charged, a farmer would come along and breach the levy, accusing the volunteers of interfering with his irrigation rights.

Attendees at the meeting reported “rivers” of water running through their homes, impassable roads and having to move their children in with relatives so they could go to school.

As of Friday morning, the water was starting to recede, they said.