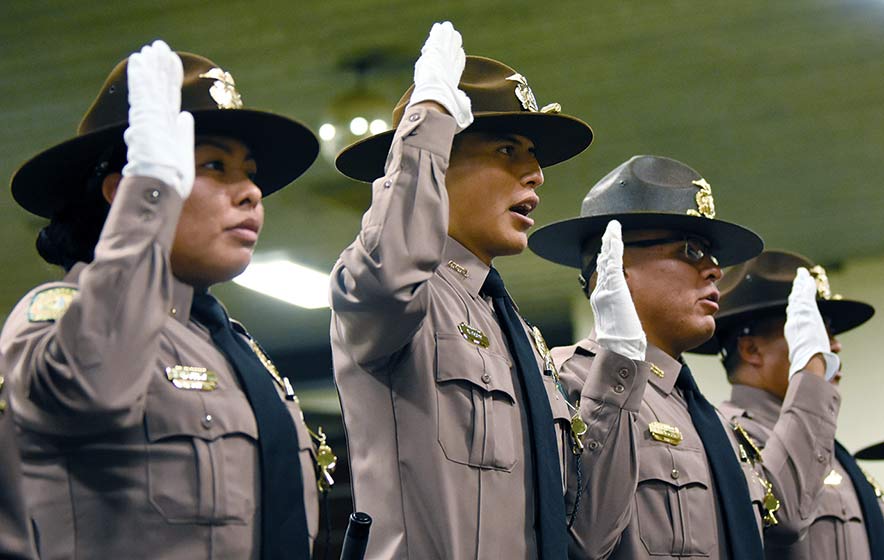 Navajo Times | Ravonelle Yazzie
Navajo Police recruits raise their right hands as they take the oath of office during the Class 54 graduation on Friday in Chinle.

When making the decision that law enforcement was what he wanted to do, Chad Yazzie, 23, said the Navajo Nation Police was the force for him.

“I’m a first-generation police officer in the family,” said Yazzie. “If I was going to work for a police department it was going to be Navajo Nation Police Department. Solely because I’m Navajo and I want to serve my people.”

Yazzie was one of 19 recruits in Class 54 at the Navajo Nation Police Academy, and last Friday this class, which had started with more than 20 recruits, graduated.

Since the academy was re-established in Chinle after a 10-year hiatus, three classes have graduated.

“This is basically the basis of how we are going to rebuild the department,” said Navajo Police Chief Phillip Francisco. “The officers that come out of the academy are the future of the department.

“This is the beginning of where I want to be before I leave here – good, quality officers that know the vision, know what they’ll be doing, know how to serve the people and willing and ready to take the Navajo Nation Police Department into the future,” he said.

But before looking into the future of the Navajo Police the past must be remembered. The academy in Toyei, Arizona, had been shut down. There was only an interim chief and the number of police officers was at an all-time low.

It wasn’t until the Russell Begaye/Jonathan Nez administration hired Jesse Delmar as director of public safety that things started happening. Working with the 23rd Navajo Nation Council’s Law and Order Committee and the president’s office, Delmar hired the young Farmington City Police patrol and training officer to be the chief of police.

In the short three years since Francisco has served as chief, much has changed in the police department.

During the last administration, the department passed the Peace Officers Standards and Training certification, revamped its recruitment policy, and re-establishing the academy was high on the priority list.

Francisco said the department had to be innovative. They had to find their own internal funding sources and partnered with Navajo Technical University and Apache County to remodel the grounds and infrastructure of the old detention center into a functional school.

“Getting the staff, we had to find the resources for that,” said Francisco. “We pulled officers and staff off of the street and dedicated them to our training academy.

“It’s a lot of manpower, a lot of hours, and a lot of strategic meetings,” he said. “There is a huge effort needed in putting up this academy.”

All of this manpower that the Navajo Police and Department of Public Safety put into establishing a top-notch police academy has given unprecedented opportunities to young Navajos like Yazzie.
“I’m really grateful that he has an opportunity to serve his community,” said Yazzie’s proud mother, Jolene Platero. “The academy is strong and it’s only going to get stronger.

“The academy itself and the Navajo Nation Police have its own reputation outside the Navajo Nation,” she said. “People who are outside of this, when it comes to law enforcement, look up to the Navajo Police Department. It’s a respectful program and organization.”

Matthew Carr, 25, had always wanted to join the Navajo Police Department and as he was ending his time in the Army a friend who was in Class 52 sent Carr a flyer about an upcoming police recruitment drive.

“I decided to join the NNPD because the opportunity presented itself while I was getting out of the Army,” said Carr, who is also a member of the National Guard. “Once I had the chance, I took it.

“The academy experience was tough,” he said. “It reminded me of my basic training for the Army – a lot of running everywhere, physical training and studying.”

Carr’s sister, Crystal Cree, said she wasn’t surprised when her brother decided to take on the 25-week training to become a member of the Navajo Police. Although she is proud of him, she and her family understand the dangers that come with being not only a cop but a cop with the Navajo Nation.

“It certainly is an emotional venture our brother, son, uncle, husband and nephew has put us through,” said Crystal. “We understand the dangers our police officers experience every day. Considering our vast land base and need for officers, we know that sometimes he will be out there responding to calls with no backup and no reception.

“Its scary to think about,” she said, “but we pray for his and other officers’ safety every day.”

President Jonathan Nez told the audience how in 1872 a police force was established on Navajo by the federal government, but after a few short years it disbanded. It wasn’t until 1959 that the Navajo Nation Council re-established the Navajo Police.

“We are into 2019, and we are the most influential tribal nation throughout the United States,” said Nez to the recruits. “We have our own police force. Sovereignty means we are able to take care of our own first. You are an inspiration to the younger generation.”

On the day before the graduation, Nez participated in a run with the recruits and during that time he said he told them of how they would be at the “front lines” with people who are going though tough times, and showing empathy, understanding and sympathy should be a must.

“People who are going though hardship – alcoholism, drug addiction, depression, suicidal thoughts — these are the folks out there who misbehave because they are going through hardship in their life,” said Nez. “Most of the time, you’ll be the first one to address these concerns, but always remember, before you take any action, that person is probably related to you through our clans. You have the ability to help them take that next step to heal.”

Law and Order Committee member Edmund Yazzie, who served as an officer for the Ramah Navajo Police Department and McKinley County Sheriff’s Department, also spoke to the class. He encouraged the recruits to pray, because times have changed.

“Back when I was in the streets, and those who have more years than I do, realize it’s not the same anymore,” said Yazzie. “There are more violent people out there. That’s why I encourage the locals to support your officers.”

Francisco said that now that the recruits have gone through the academy, next is field training. He said from what he has been told about the recruits from FBI and county officers who have worked with them, they are exceptional.

“This did not only take my effort, not just staff’s effort, but the whole community’s effort,” said Francisco. “This is a community effort to get these officers here.”

With the evolving Navajo Police Department, Francisco implemented a motto to which he wants his department to aspire: reliable, responsive, trustworthy.

“This is what our department is striving for,” said Francisco. “This is our road map. I’ve been pushing this on these officers and the officers across the Navajo Nation that this is our new motto and this where we are going. This is my promise to the people.”