Rising to the challenge: Hatathlie sworn in with culture surrounding 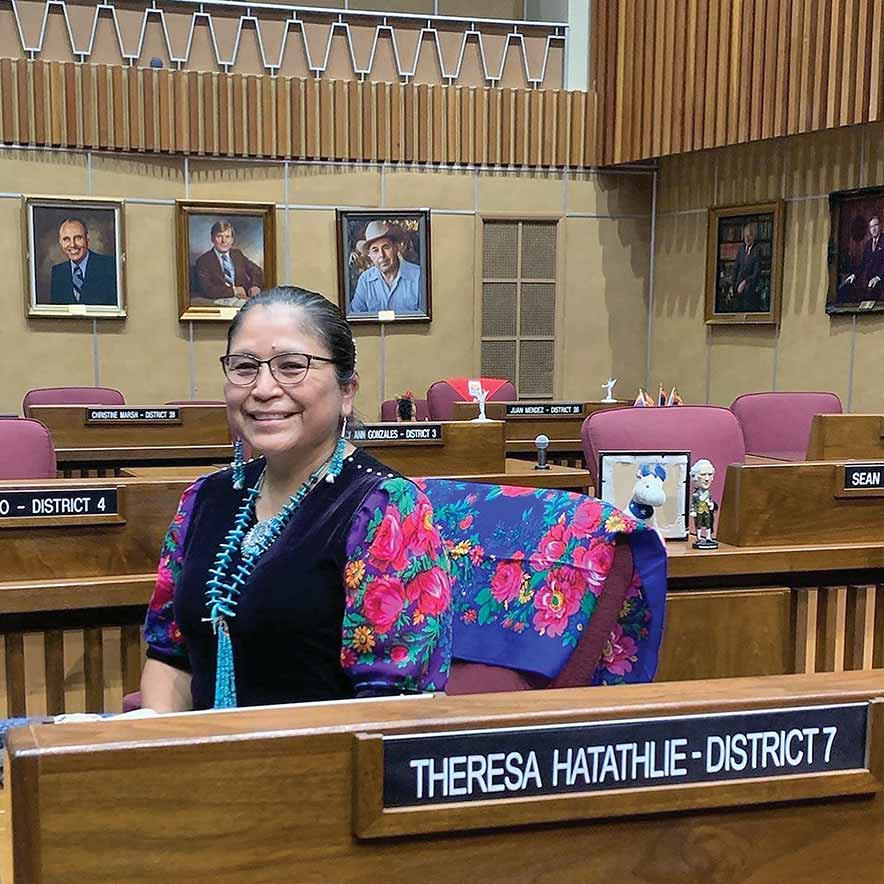 When Theresa Hatathlie took the oath of office Monday morning, she placed her hand on ceremonial items sacred to her family.

Those items were placed on a hooshdódii that her eldest daughter, Valene, wove. She also had a áki’dah hániłí draped over her left arm.

Dressed as her late mother once dressed, Theresa Hatathlie took an oath to uphold the U.S. Constitution.

Less than two hours before the 2022 legislative session began, the Arizona Senate welcomed Hatathlie, 52, as its newest member.

The Coconino County Board of Supervisors appointed Hatathlie to fill the District 7 Senate seat vacated by former Sen. Jamescita Peshlakai, who resigned last month to work with the U.S. Department of the Interior.

Numerous testimonials strengthened the nomination from people across the country.

“Thank you to all the individuals who sent in their support letters, endorsements, and phone calls to solicit support,” Hatathlie said in an exclusive interview with the Navajo Times. “I’m deeply humbled, and all I can do is send a prayer of thanks.”

Hatathlie said she would be wholeheartedly dedicated to her job and to the people who reside in her district, which covers portions of Coconino, Mohave, Navajo, Apache, Greenlee, Graham, Pinal, and Gila counties.

The district has an overall population of 204,666, according to the Arizona Department of Economic Security’s recent legislative district demographics handbook.

Hatathlie said she isn’t going to back down in this position – even if she has to jump over or crawl under barriers – because she was raised by strong parents rooted in community.

And because of their parents, she and her nine siblings are rooted in community, said Hatathlie.

“The importance of leadership is based on cultural concept,” she said, “and it’s so valuable to hear an individual speak their language … to address the way the elders have done so in the past.

“That’s the sentiment that I have received,” she said. “They appreciate that, and they honor that.”

“In the time of crisis, (Diné) women rise to the challenge,” Hatathlie said. “It just exemplifies our teachings and all the Indigenous cultures, not just Navajo. That’s important to note.

Hatathlie said her appointment affirms that Diné women in leadership have a commonality of those teachings from home.

From a cultural perspective, she said those teachings follow Yoołgai Asdzáá, which teaches of becoming a woman and strengthening one’s mind, body, and spirit.

Hatathlie said she had a áki’dah hániłí draped over her arm when she took the oath of office. It was made by her mother-in-law.

And the hooshdódii draws a parallel between three generations of Hatathlie women.

“My mom (Bessie) wove Navajo rugs all her life,” Hatathlie explained. “During the Flagstaff Powwow, she and my father traveled there to market a newly completed tapestry. The business transaction included turquoise necklaces, each with eight Jaclo, and a sum of money.

“One necklace she kept for her own (and) one they decided to keep, and the last she gave to my dad,” she said. “My mother gifted me his necklace a few years ago and retold the story to me one last time. That’s what I wore.”

With her mother in mind, she blended both colors and made a blouse for the ceremony.

“It felt like I was in a dream,” Hatathlie said. “But in the end, the overwhelming support has really been unbelievable and humbling.

“I had so many great mentors and role models in this whole road of life, and that’s led me to this point and to this appointment,” she said. “It’s an honor and a privilege. I always give appreciation and gratitude to my parents and to my upbringing, my Diné that started at home.”

She added: “My relatives and my elders, the stories, the songs and the prayers of my forefathers (are) what I believe brought me to this point in my life, to be appointed as an Arizona state senator. All in all, I think I have big shoes to fill.”

Calling Theresa Hatathlie a titan is accurate, but it doesn’t capture what she regularly does. Few people are willing to admit when learning and growing as she does.

She has worked in positive youth development strategies for Western Navajo communities for more than 20 years.

She has served on the Diné College Board of Regents – on which she is the vice president – for the past nine years.

“For me, that work of advocacy is something that I’ve worked for, for many, many years,” Hatathlie said. “My community, at Diné College, with that experience, I really do believe that (those) experiences have prepared me for this current position.

“And then advocating for not just reason, education, and that multifaceted aspect of nation-building – infrastructure, community needs, social needs, environmental needs, elders, veterans,” she added. “That experience has opened my eyes to that on a larger scale.

“And then the work I’ve done with Senator Peshlakai,” she said, “the needs of the various communities in LD7.”

Hatathlie said she thanks Peshlakai for her mentorship and the nominated candidates, Gwen Ward and Pearl Yellowman, both of whom took a courageous step alongside her.

Hatathlie said her work had begun researching and making sure she had a grasp on the 32 Senate bills on her desk.

“That’s the first order of business, to read and to do my homework,” she said.