Tracking down the treaty: the story behind the story 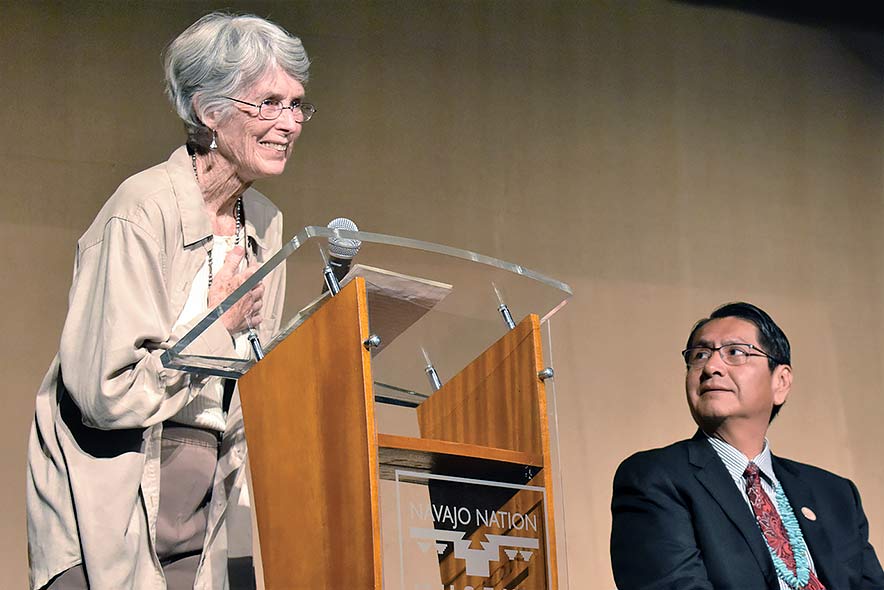 Navajo Times | Rima Krisst
Clare “Kitty” Weaver, donor of the “Tappan” original copy of the Naaltsoos Sání, the Treaty of 1968, speaks from the heart at the Treaty Day commemoration on June 1 at the Navajo Nation Museum in Window Rock.

In the early spring of 2018, I was assigned to do a story on a Navajo dance troupe who was marking the 150th anniversary of the Treaty of 1868 by performing at the historic homes of Andrew Johnson, who was president when the treaty was signed, and General William Tecumseh Sherman, who signed it on behalf of the U.S. government.

It was a nice story. It was a fairly important story. It was the kind of story I like to do, because, frankly, I’m getting a little long in the tooth to be chasing bad guys like I used to and as you get older, it becomes less and less clear who the bad guys really are.

As I was interviewing Shawn Price, the director of the Dine Tah Navajo Dancers, he let slip that while the troupe was making arrangements to perform at the Fort Sumner State Historic Site earlier, he had overheard the staff say that someone had found the missing third original copy of the Treaty of 1868.

“It is,” he agreed. “I don’t think they want people to know about it yet.”

Heck with that, I thought. Of course people had to know about it.

As far as anyone in the tribe knew at that time, there had been three copies of the treaty made. One had been delivered to Washington and is currently preserved in the National Archives. One was given to Barboncito and was buried with him, jiní.

The third, which was for the records of the Indian Peace Commission … nobody knew what had happened to it. Or so we thought.

Price would later regret spilling the beans about the treaty. In a letter to the editor, he lamented that the treaty story had completely eclipsed the dancer story, which he thought was just as big.

I thought I did a very nice article on the dancers, although I refused to run a series of pictures of the plaques they presented at both locations (just the plaques, no one holding them) because I thought they were boring beyond words and people would rather see pictures of the dancers dancing at the historic homes, of which Price had surprisingly few.

Price was still holding onto the slight a year later when I watched the Dine Tah dancers perform at Canyon de Chelly and he couldn’t resist mentioning it to the entire audience.

But, whatever. I’m forever in his debt for giving me one of the biggest and funnest stories of my 40-year career.

A millisecond after getting off the phone with Price, I was dialing (or whatever you call it these days) the historic site. I asked for Ranger Grace Roybal. I had met her four years earlier while doing a story on the 150th anniversary of the start of the Long Walk, and knew that, after years of hearing Navajo visitors’ tragic Long Walk stories, she was sympathetic to the tribe.

Hopefully that included the tribal newspaper.

“Grace,” I said, trying to sound casual, “I hear someone found the third copy of the treaty.”

“Yes,” she said. “But you can’t write about it. We’re still talking to the tribe, Historic Preservation and the owner, trying to figure out what to do.”

Aha. I had my first clue.

“Can you put me in contact with her?” I asked.

“Grace,” I said, shamelessly playing the race card even though I’m not Navajo, “this is a Navajo story. The Navajo Times should be the one to break it.”

“I’ll give you her name,” responded Roybal. “You’ll have to track her down yourself.”

How hard could it be to track someone down in this day and age? I did it practically every day.

Today, if you Google Kitty Weaver, you’ll find pages and pages of articles from papers all over the world that reported on the treaty story.

But in 2018, the only reference I could find, after distinguishing her from the 20 or so other Kitty Weavers that came up, was an obscure reference in a book on morality written by a Harvard theology professor, citing Weaver’s historical work on her great-great-uncle, Samuel Tappan, who in addition to helping draft the Treaty of 1868, was a noted abolitionist.

I got on the Harvard website and tracked down a phone number and email for the professor, but it was spring break and she wasn’t around.

I had all but despaired when, two weeks later, I got an email from the professor. She was reluctant to give me contact information for Weaver, but would have her assistant give her my email and explain the situation. (Apparently professors, once they get to the Harvard level, have personal assistants.)

Another few days went by and I had begun to despair again when I opened my email and noticed a message from a C.P. Weaver.

Could it be? It was!

Clare P. “Kitty” Weaver of Manchester-by-the-Sea, Massachusetts, who miraculously had not been approached by any other reporters, agreed to call me and give me the whole scoop.

Not only that, she was warm, witty, charming and occasionally a bit caustic … the perfect interview.

The story had everything a reporter could hope for in a buried treasure story … a musty attic in an old house, a long-forgotten trunk full of yellowing documents …

I had hoped for a ghost, but Kitty said she hadn’t heard anything from her “Uncle Sam,” other than perhaps he was maneuvering behind the scenes to help her find the document and preserve it in a file until the proper time for its debut.

Sadly, the timing wasn’t quite right … the treaty had not been eerily unearthed in its sesquicentennial year. Weaver had actually found it about 10 years earlier in some documents her grandfather had discovered in one of the trunks.

“I had no idea it was ‘missing,’ and that people were looking for it,” she told me.

She had actually called Fort Sumner, but no one had seemed terribly interested at the time.

“Amazing the importance we attach to dates,” she emailed.

My story “Out of the Woodwork” appeared in the Times on April 12, 2018. It was picked up nationally, and a month or so later an English friend mailed me a version from the Times of London. Several people sent me links to the other stories, telling me I should follow up.

Maddeningly for my ego, all my hard work breaking the story went pretty much unnoticed. But anyway, I was now in contact with Kitty in time for the next series of articles, which had to do with what would happen to the treaty now that it had been uncovered.

Both the state of New Mexico and the Navajo Nation wanted the treaty, Kitty confided. She was leaning toward the Navajo Nation, but now that she knew how delicate the old document was, she didn’t know if the tribal museum had the resources to care for it properly.

While she waffled, the Fort Sumner Historic Site and the tribe agreed to a compromise for the anniversary year: the tribe would display the other extant original copy, on loan from the National Archives, on the actual anniversary: June 1. Fort Sumner would follow up with its own commemoration a week later, using Weaver’s “Tappan Copy.”

Navajo Nation Museum Director Manuelito Wheeler and President Jonathan Nez had both been working on Weaver, and if you know either of those men, you know they can be quite charming.

The person who convinced her

But it was a woman who convinced Weaver to donate the Tappan Copy to the Navajo Nation.

When the treaty was unveiled at Fort Sumner in June of 2018, a Diné woman reverently walked up to it, sprinkled some corn pollen, and said a prayer.

“Up to that time,” Weaver said, “I had known the treaty was an important historical document. But not until that moment did I realize the emotional and spiritual connection it had for the Navajo people; that they considered it a living being.”

When I reported this incident, I wrote that Weaver never got that woman’s name, which turned out not to be true. After the ceremony, they introduced themselves and have been friends ever since.

The Navajo woman was 61-year-old Susan Hudson, a fabric artist of national renown who will be featured in an upcoming PBS documentary on quilting.

Hudson later told me she had two great-great-great grandmothers who were interned at Hwéeldi.

“If there was even a possibility that some of my ancestors’ molecules were on that paper, I wanted to be as close to it as possible,” she said in explaining her actions on that day a year and a half ago.

But in a very recent interview, about the PBS show and her quilting career, Hudson admitted there may have been just the tiniest bit of theatrics involved.

“I knew the donor was in the room,” she said. “I wanted her to see what the treaty means to us Navajos.”

A donation to the Nation

Whatever. It worked. On Treaty Day 2019, Kitty Weaver officially donated the Tappan Copy to the Navajo Nation Museum, where it now rests in a climate-controlled room.

When it’s on exhibit, a recorded voice reads the words scribed by Tappan, translated into Navajo. The reverence for the document is readily apparent. Even a historian for the New Mexico Historical Preservation Division conceded it’s probably where it needs to be.

As for me, I got to witness history and write a great story. But perhaps more important, I made the acquaintance of two women who continue to inspire me.

Weaver has over a decade on me; Hudson and I are the same age. When I consider retirement, I dream about having every room in my house clean at the same time, expanding my vegetable garden, and cooking nutritious meals from scratch.

I joke with my husband that my dream job is 1950s housewife.

But here’s Weaver, writing a book about her famous relative and making an important contribution to a tribal museum.

Here’s Hudson, who’s not even retired, quilting away and scooping up all kinds of awards.

Maybe everybody gets a second act. Maybe you just have to be open to what the universe is trying to tell you.

Maybe everybody gets one buried treasure in their lifetime, and just has to decide how to use it.