‘We’re human and our tears are real’ 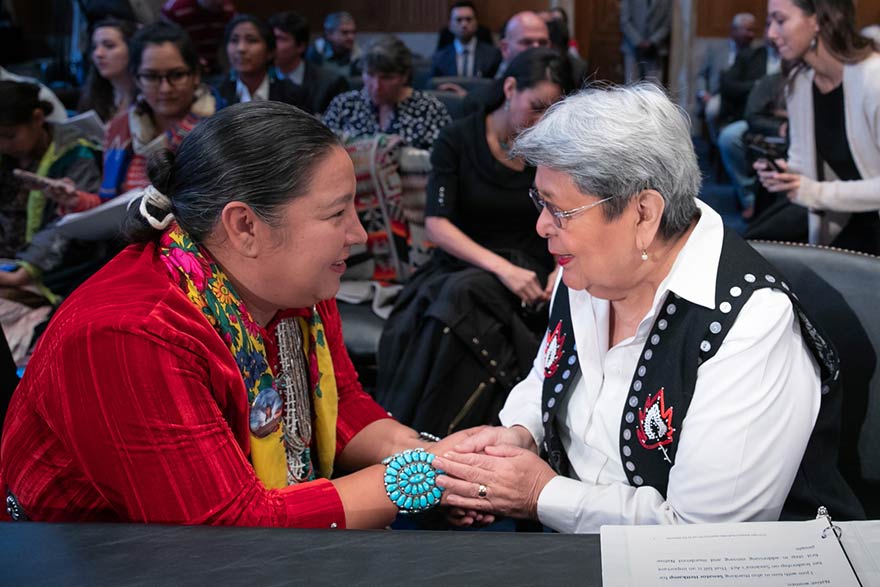 AP Images | J. Scott Applewhite
Navajo Nation Council Delegate Amber Kanazbah Crotty and Patricia Alexander, a member of the Tlingit and Haida Alaskan tribes, exchange words of encouragement to each other before testifying in the Senate hearing.

By Jenni Monet
Special to the Times

Navajo Nation Council Delegate Amber Kanazbah Crotty, in perhaps one of the longest hearings held by the Senate Committee on Indian Affairs all year, on Wednesday gave compelling testimony about why she wears a yellow scarf in memory of Ashlynne Mike.

Crotty, who represents Beclabito, Cove, Gadi’i’áhi/To’Koi, Red Valley, Tooh Haltsooi, Toadlena/Two Grey Hills and Tsé ałnáoz’t’I’í, and is the only woman on the 23-member Council, sat through more than three hours of questions from senators from states with large Native American populations.

Both Republicans and Democrats expressed grave concern about the heart-wrenching reality of violence on Indigenous women, men, children and transgender people and agreed that the true number of those afflicted is unknown and that impunity for these perceived crimes is disproportionately high.

It’s unclear just how extensive the problem is. A review of the FBI’s 2017 violent crime report lists incidents that occur on tribal lands, but does not tell anything about the gender or ethnicity of the victims. Statistics from the Centers for Disease Control and Prevention suggest that young Native American women are less likely than other women to be victims of homicide. Advocates argue that such statistics reflect poor data collection, not less violence.

Crotty submitted a 36-page document to the Senate committee on behalf of the Navajo Nation.

The written testimony includes recent crime and victim data from the Navajo Nation’s understaffed and overworked police department, its network of low-budget supportive family service groups and its overwhelmed social services program, to name a few.

With these details, Crotty repeated the sentiments of lawmakers: The criminal justice system in Indian Country is one that does not provide justice.

“To our federal partners,” Crotty said, referencing two law enforcement officials who testified but immediately left the hearing before listening to the delegates’ remarks, “it’s quite clear on their departure and how that reflects in terms of their commitment and their relationship to Indian Country, to Navajo Nation, and to our family members.”

Sen. Jon Tester, D-Mont., pointed out that at least one federal witness, Charles Addington with the Bureau of Indian Affairs’ Office of Justice Services, stayed in the room.

“But you’re right,” said Tester. “The other two left.”

The banter underscored the lawmakers’ concerns about how Indigenous lives are undervalued in criminal justice affairs.

Crotty delivered a prepared statement and fielded questions with fellow panelists Patricia Alexander, of the Central Council of Tlingit and Haida Indian Tribes, and Kimberly Loring-Heavy Runner, sister to Ashley Loring-Heavy Runner who went missing June 12, 2017, on the Blackfeet Reservation in Montana.

Tester and other committee members see Indian Country, both on and off tribal trust lands, as deep pockets where traumatized individuals and families are – intentionally or unintentionally – overlooked by the agencies that are supposed to respond to their needs in times of emergencies.

“You can’t step foot in Indian Country without hearing about this heartbreaking problem,” said Tester. “If this was going on any other place in the country, there would be incredible hearings in this body.”

For federal law enforcement, that means that the Department of Justice is negligent in responding to crimes on and around Indian reservations. But officials within the DOJ, including the BIA and the FBI, cite a lack of evidence to counter those concerns.

Sen. Heidi Heitkamp, the North Dakota Democrat who introduced the recent Senate-approved Savanna’s Act as a way to curb violence in Indian Country, asked if the FBI had any offices directly located on tribal trust lands.

“You guys talk a big story but it doesn’t match with what actually happens on the ground,” said Heitkamp to Robert Johnson, assistant director of the FBI’s Criminal Investigative Division. “When cases are declined because there’s been missteps on evidence then you don’t have prosecution – you have absolutely no deterrents and it’s open season on people who live in Indian Country.”

Across the 326 reservations in the U.S., the FBI is responsible for investigating the majority of major crimes occurring on these trust lands in some 200 tribal communities. Yet of the 56 field offices staffed with roughly 100 agents to respond to felonies such as homicide, rapes and abductions, not one of these offices is situated within reservation boundaries, according to Johnson.

Despite known data disparities, the DOJ in 2016 released figures showing U.S. attorneys declined to prosecute 68 percent of these types of crimes due to insufficient evidence submitted by the FBI. Roughly 16 percent of others were referred to other jurisdictions.

For its part, the DOJ argues declination rates alone are not a useful way to measure justice or success in Indian Country.

“It’s a major failure on the FBI that there’s no cop on the beat,” Heitkamp chided.

The exchange suggests that as Congress takes up the issue of violence in Indian Country, the FBI’s role in how it responds to crimes on reservations and how it collaborates with other law enforcement will be central to scrutiny.

“One of the biggest issues here is the resource issue, whether we have adequate law enforcement officers to do the job,” said Sen. Tom Udall, a Democrat from New Mexico and vice chairman of the Indian Affairs Committee.

Udall said statistics suggest adequate public safety requires at least three officers for every 1,000 people. Indian Country, at over 87,000 square miles, reflects the disparity of 0.14 FBI agents per 1,000 people living on tribal lands. Udall cited data submitted by the Navajo Nation showing about 0.85 officers for every 1,000 tribal citizens, or only five FBI agents and six victim advocates to cover the entire 27,427 square miles of the Navajo Nation.

The most startling revelation involved Sen. Lisa Murkowski, Republican of Alaska, who, in describing the extreme absence of law enforcement that exists across the state’s vast network of Native villages, said fish and wildlife regulations are more strongly enforced than those for the public safety of Alaskans.

“When you can get a higher penalty for poaching a moose than violating a woman, that’s a problem,” Murkowski said, referencing a case this week that resulted in a $100,000 fine and nine months in jail for an Alaska man.

The contrast was not lost on several people in the room, including Heitkamp, who recalled a previous case in September in which an Anchorage air traffic controller escaped jail time for raping an Alaska Native woman. Kidnapping charges were dropped.

“There is no 911 to call. There are no AMBER Alerts,” said Patricia Alexander of the Central Council of Tlingit and Haida Indian Tribes. Her voice quivered as she fought off tears.

Loring-Heavy Runner, who said police in Montana misplaced key evidence in her sister’s disappearance – some boots and her sweater -– said the case of a deer slaughter around the same time was handled more effectively.

“This is nothing new,” said Lorring-Heavy Runner, who claimed a culture of discrimination and victim shaming on Native Americans is often associated with law enforcement’s neglect.

Asked how lawmakers could help improve investigations of missing and presumed murdered Indigenous victims, all witnesses suggested a top-down leadership shift across all law enforcement at the federal, state, county, city and tribal levels.

With an estimated three-quarters of today’s tribal citizens living in cities as opposed to reservations, the talks discussed the need to include Indigenous victims and survivors living in urban areas.

Crotty, who also chairs the Naabik’íyáti’ Committee’s Sexual Assault Prevention Subcommittee, said she has already reached out to Representative-elect Deb Haaland of New Mexico, one of the first two Native American women ever elected to Congress.

Crotty is advocating for assistance to assist in data collection after three Navajo transgender women were missing in Albuquerque – part of Haaland’s district – and were later found murdered within a block of one another.

“This violence against our women is not limited within our ancestral land areas but it is also prevalent in urban areas,” said Crotty, who sat alongside Haaland during part of the day’s hearing.

She also talked about the impact the Major Crimes Act has had on tribal nations like Navajo, a 19th-Century statute that stripped tribes of authority to manage their own crime justice matters and instead placed these decisions under federal jurisdiction.

“We’re bound by federal law that has taken this authority away from us,” Crotty said. “So, if you’re not ready to give that back to us, then we’re here at your mercy asking for your help.”

The details in her 36-page statement show that even with aspirations to one day prosecute violent crimes in their tribal courts, the path is steep.

For all the hype that the Violence Against Women Act allows in returning sovereign justice to tribes, for the Navajo, the costs are too great.

Crotty’s closing remarks included the memory of 26-year-old Amanda Dakota Webster, a Diné woman from Na’ni’á Hasání, Arizona, whose body was found in a Kentucky hotel room on Dec. 1. She mentioned Webster’s three children who are now without a mother.

“We consider this not only a public health crisis but a crisis against our future generation,” said Crotty. “We’re human here and our tears are real.”


To read the full article, pick up your copy of the Navajo Times at your nearest newsstand Thursday mornings!