‘What about us?’ – a call for an accessible Nation 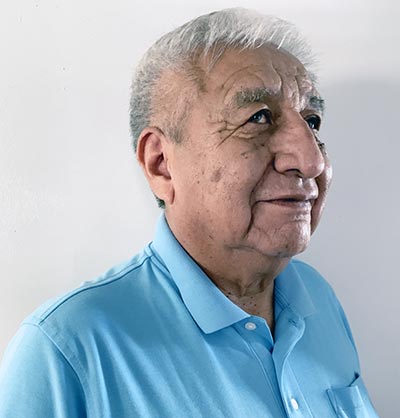 Courtesy photo | Native American Disability Law Center
Hoskie Benally works to improve services and resources for the disabled and hopes one day the Navajo Nation will be totally accessible.

Hoskie Benally has been advocating for the disabled all of his life.

As a volunteer, he is president of the Navajo Nation Advisory Council on Disability while holding the position of community and government liaison for the Native American Disability Law Center, an advocacy organization located in Flagstaff and Farmington.

He is one of them. He is blind.

Benally pointed out that when he raises issues on disability, “This is not me saying it, community members are speaking out. We are pushing it because we are advocates.”

His campaign is called “What about us?”

The Native American Disability Law Center conducted surveys across the Navajo Nation based on the 2000 census.

“All five agencies,” he said.

The surveys found that every which way they turn, the disabled living on the Nation face obstacles and barriers that keep them from having equal rights afforded to others.
To name some, challenges include getting housing, entering and accessing public buildings, securing employment and training opportunities and getting transportation with wheel-chair access.

With all these difficulties, their voices are seldom heard because they can’t get to their polling site to vote.

If they do get there, they face more obstacles. “Able” bodied drivers park in handicapped spots or there are no designated spots. Parking lots are muddy or filled with gravel making it difficult to maneuver wheelchairs, walkers, and are potentially unsafe for persons with visual impairments. Door handles are difficult to work and bathrooms are not accessible.

“The Navajo Nation is kind of hard,” said Nate Ellison, a wheel-chair user whose home is in Shiprock. “There are not enough services for the disabled.”

Ellison, an advocate Benally has guided over the years, speaks out for the disabled at chapter meetings.

“We have been put on the back burner,” Ellison said. “A lot of things need to be fixed,” referring to homes, public buildings and housing communities.

“There is no access to restrooms, the doors aren’t wide enough, and there are no on-ramps to access sidewalks,” he said.

Elton Yazzie, who is blind, is another advocate Benally engaged through a focus group, also a law center effort, to receive input.

Yazzie is the president of the Northern Arizona Tribal Disability Coalition, an organization focused on encouraging and empowering independence.

Yazzie said the lack of customized sidewalks in housing developments is a fall risk for elders.

He knew of one person whose walker got stuck between cracks and another person who fell out of their wheelchair trying to access the sidewalk.

Besides community and public building access there are a number of other issues that need to be resolved to make the Navajo Nation fully accessible, according to Benally, Ellison and Yazzie.

Here are a few examples:

He has tried over the years to collaborate with Navajo Nation departments like transportation, election, economic development, but had no luck even after pleading with administrations for cooperation.

“Can you please help us?” Benally remembers asking President Jonathan Nez. “What we need you to do is tell your division directors to help us because we have been trying to schedule meetings with them.”

For a meeting with Navajo Transit, he’d like to see how they could work together to get wheelchair lifts, which would help with transportation needs.

For a meeting with economic development, he wants to provide information to help ensure that companies issued business leases know what they need to do to comply with the Civil Rights Act.

“We can get a lot of this done and answered if we could meet with the right directors and then see what the situation is and if it needs legislation, and we can move forward on that,” he recalled saying.

“They never got back to us,” Benally said. “This is frustrating that they don’t respond. I don’t know if they do not care (or what). We just go around in circles with the Navajo Nation government.

On Aug. 16, the president’s office announced through a press release that $13.3 million has been approved for renovations at government facilities, including 64 chapter houses.
Modifications to public buildings include widening hallways and office entrances and installing automatic doors, ramps, sidewalks, parking pads, and signage.

Nez said, “The administration appreciates the Navajo Nation Council’s support of these critical community projects that will provide a hand up for elders, veterans, students, and families.

“That’s a lot of money,” Benally said, “(but) it’s not just 64 chapters that need help. We all need help across the reservation. There are 110 chapters and each chapter has its own issues.”

Benally said access to public buildings is needed but so are all the other issues like housing, transportation and economic development.

“They keep going back to this public building accessibility issue but they aren’t addressing all the other issues that we brought up over the years,” he said.

Benally is hoping the Navajo Nation will be accessible one day. Until then, he will be advocating for one.

The president’s office didn’t respond to a request for an interview.

Editor’s note: The second part of this series will feature Elton Yazzie and the Northern Arizona Tribal Disability Coalition.