Who’s being vaccinated? Depends on where you live 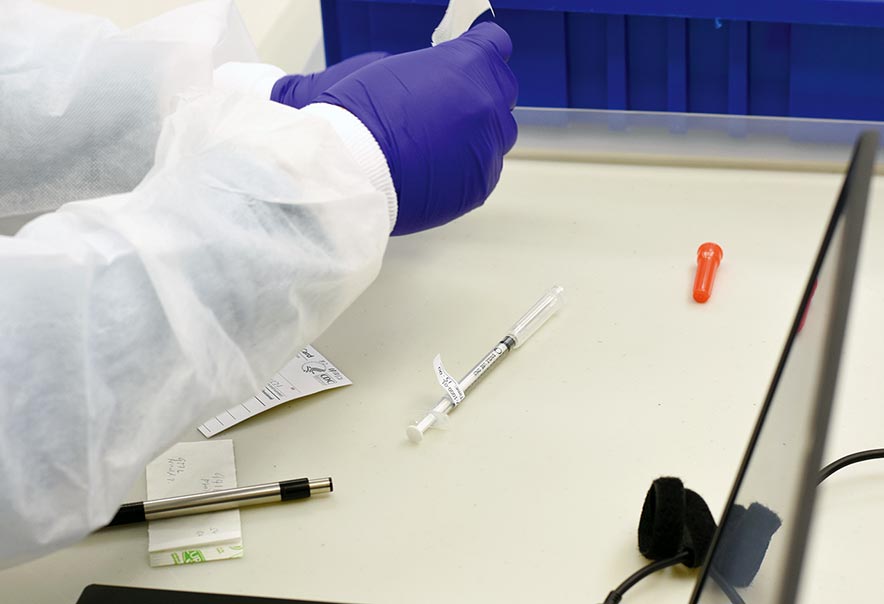 Navajo Times | Donovan Quintero Sheia Benedicto, a registered nurse at Sage Memorial Hospital, prepares to administer the Pfizer BioNTech vaccine to a colleague on Tuesday in Ganado. Some hospitals on the Nation were vaccinating people in Tier 1b this week.

As of last Wednesday, some Indian Health Service facilities were vaccinating people other than first-tier health care professionals, according to people who were able to get their COVID-19 vaccines.

The IHS Navajo Area confirmed in a statement that vaccine availability varied by location and it was left up to the local administrations whom to prioritize for the vaccines, within IHS guidelines.

“Depending on the population and available vaccine allocations, some facilities may be able to provide the vaccine to certain target groups earlier than other facilities,” the statement read. It revealed that the Navajo Area has received 11,800 doses of vaccine and another 11,700 has been set aside to provide second doses for those who have obtained their first shot, with more serum scheduled to arrive in the coming weeks.

In Chinle, a tribal employee said she was visiting the Chinle Comprehensive Health Care Facility for another matter last Wednesday when she noticed a long line in front of the building and was told it was for people waiting for vaccines.

She asked if she could get a vaccine and was told that tribal employees were eligible along with teachers. She was vaccinated with the Moderna vaccine after showing her tribal ID.

As of Wednesday afternoon, however, people calling to schedule a shot were told the hospital was no longer taking appointments and would start making them again Monday. When this reporter called late Monday morning, she was told only people over 75, dialysis patients and first responders were able to make appointments.

Director Wayne Claw confirmed all residents and workers at the Dr. Guy Gorman Sr. Care Home had been vaccinated the previous week.

Meanwhile, in Crownpoint, people living with health care workers were prioritized, according to Navajo Times Sports Editor Quentin Jodie, who got his shot.

Jodie said his sister, a hospital employee, called him last Wednesday and told him he could get in line at a drive-thru vaccine clinic at the Crownpoint Health Care Facility. Jodie hurried to the clinic and arrived about 9:30 a.m. He estimated there were 30 to 40 cars in line ahead of him, but within an hour he had received the Moderna vaccine after showing an ID that was matched against a list of names the clinic had obtained from its employees.

Other large IHS and Public Law 93-638 facilities, including the Gallup Indian Medical Center and Rehoboth McKinley Christian Hospital, said they were still working on getting all their employees vaccinated. A Rehoboth employee said they hoped to start vaccinating elderly community members by the end of the month.

A Tséhootsooi Medical Center employee said the hospital had vaccinated its employees along with local police officers, emergency medical technicians, firefighters and community health representatives, and hoped to start on elders next week.

Meanwhile, the Utah Navajo Health System, which had opted to obtain its vaccine supply through the state rather than the IHS, was hosting drive-thru vaccination clinics this week for elders over 75 who are existing patients of the system, along with first responders and any health care workers who missed the first round of inoculations.

As of Monday Tuba City Regional Health Care Corp. was still in the process of vaccinating its 1,000 employees and formulating a plan to distribute the rest of its vaccine supply, according to spokeswoman Aurelia Yazzie.

Jodie said he is grateful he was among those receiving the vaccines, as he has some underlying health conditions and is worried about getting the virus. “I’m still going to take precautions to protect myself, even after I get the second dose,” he said. “But I feel a lot better about it now.” Jodie said he had no side effects other than a slight headache, “but I get those when my (blood) sugar’s up, so it could have been that.”

Most of the hospital spokespeople contacted for this article suggested people call their primary care providers to find out when they can get vaccinated, as the hospitals’ main phone lines Monday were clogged with people wanting information on the vaccine.

Tséhootsooi said they would advertise their upcoming vaccine clinics on the radio and social media.