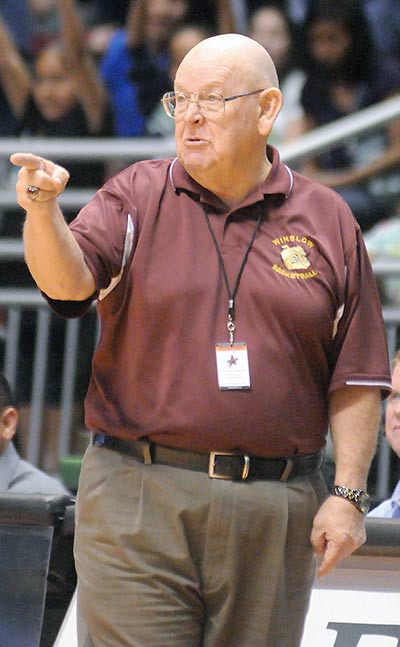 He was 81 years old and he died of natural causes in Yuma, Arizona.

Petranovich leaves behind wife Gerri Petranovich, whom he married in 2013, and his sons Michael and Erick Petranovich.

He was preceded in death by his first wife, Claylene Petranovich, who passed away in 2006.

“He was a good father,” Erick said on Thursday. “He was always there for us, and he always took an interest in what we liked.”

Erick said his dad coached his brother’s little league and football team, but as a family they knew basketball was huge deal for the late coach.

“My mom accepted that from the time they married, and he was always there for his kids,” he said.

Condolences continue to pour in for the Hall of Fame coach, who was inducted to the National Federation of State High School Associations in 2009. He was named the national coach of the year in 2011.

“It meant a lot to him,” Erick said of his induction. “My dad didn’t think he deserved all the recognition he got. Whenever he would get an award, he would say it wasn’t his award – it was the players that played for him. He was a humble guy, and he didn’t really like the limelight.”

Petranovich started his coaching career in 1976 and he retired in 2010, compiling a 779-169 record. He also served as the school’s athletic director for 15 years before leaving his post in 2013.

“The girls were his family,” Erick said of his dad. “I mean, every girl that played for him he considered them as his daughters. He always would tell them that there is more out there than basketball. Basketball is just a stepping-stone, but education is more important and, you know, whatever you do make sure you give it 110%.”

Erick said his dad would do anything for his girls and any time they were in town they would visit him.

Current Winslow girls’ basketball coach Jerron Jordan said the late coach was there for everyone regardless if they were in athletics.

“He cared about everyone,” he said. “He looked out for them whether or not they played sports. He had a shoulder to lean on for all the student body, the teachers and his colleagues.

“There wasn’t a person who didn’t look up to coach Petranovich,” he added. “He was such a good person. He really opened up to all the people at Winslow High School and I became a part of his family with my wife and son. He was a second grandpa to my son.”

Jordan said he couldn’t ask for a better mentor in coach Petranovich.

“I took over as head coach in 2010 and he was my athletic director for three years,” Jordan said, while adding that he served as one of Petranovich’s assistant coaches for a dozen years.

“It means a lot to have worked under him,” he said. “I couldn’t ask for a better teacher and mentor. I was like a sponge and I learned all I could from him.

“It’s such an honor to work under coach Petranovich,” Jordan said. “He’s a man of integrity and he taught me how to do things the right way, and how to run a program like a family, so I’m thankful for all the teaching he instilled in me and the program.

I just want to carry on his legacy and do the best I can as a coach,” he added.

As the school’s athletic director, Jordan said the late coach cared for all the programs at Winslow High.

“It just wasn’t the girls’ basketball team, but he wanted every program to be successful and every coach can vouch for that,” he said. “He supported our band and orchestra group, and he really never missed an event.”

Funeral arrangements are pending but the family said, tentatively, a visitation will be held on June 16 at the Greer’s Mortuary of Winslow.

Mass will be held at St. Joseph Catholic Church on June 17 and a memorial is scheduled for 4 p.m. at Winslow High School later that day.